After a sensational first season in Formula 1 with Toleman in 1984, Ayrton Senna was expected to make a splash with Lotus in '85. And it didn't take him long, as he proved 35 years ago today in that year's Portuguese Grand Prix, where he took his first pole and race win plus the fastest lap for good measure.

Following a late electrical failure that took him out of the running for a podium finish in Rio de Janeiro's opening round, Senna arrived at Estoril looking for his first points of the season. His Gerard Ducarouge-penned Lotus 97T had showed flashes of pace-setting form in Brazil, but in Portugal the new combination unleashed its obvious potential right from Friday's first qualifying session.

Senna's previous best qualifying effort had been third at Estoril the previous year with Toleman, and on his return he blitzed to pole by 0.413s from McLaren's Alain Prost, 1.152s faster than team-mate Elio de Angelis in fourth.

De Angelis, who had outqualified Senna in Rio, complained of tyre issues on Friday, and on Saturday had a turbo failure. Not that it troubled Senna, who was in determined mood after qualifying.

"I would like to be able to get away in the lead because then you are clear of any problems on the first lap," he said. "Then I will be able to see how fast I can go and pace myself accordingly. 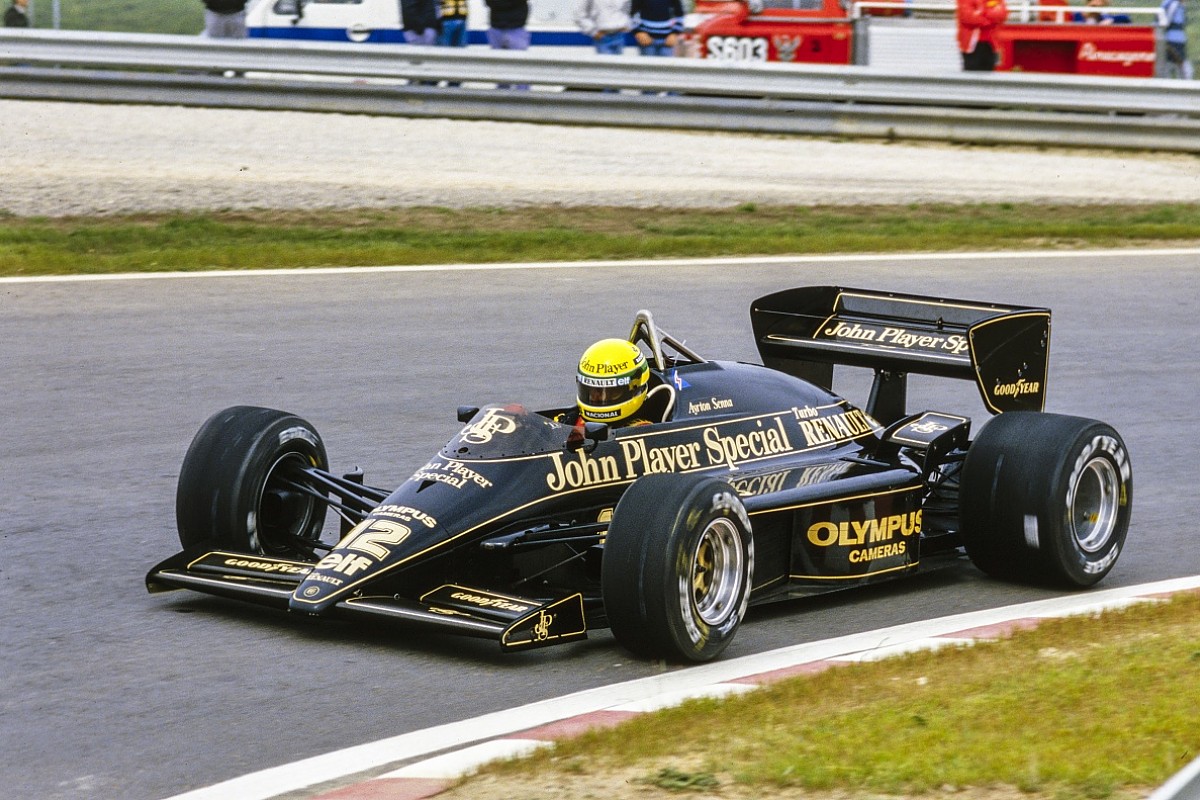 "We tried the car with full tanks and it felt good, but there is no overall race plan, we shall have to wait and see what conditions are like.

"If everything is OK, I hope that I can win my first grand prix."

On raceday, heavy rain drenched the track, and F1 was about to get another glimpse of the wet-weather skills that had almost earned Senna Monaco Grand Prix glory the year before. He made a perfect start, leaving Prost in his wake, as de Angelis powered through to second.

"The big danger was that conditions changed all the time. It was difficult to keep the car in a straight line sometimes, and for sure the race should have been stopped" Ayrton Senna

Prost ran third, with Ferrari's Michele Alboreto fourth. Keke Rosberg stalled his Williams at the start, amazingly without being collected by those behind, while team-mate Nigel Mansell - whom Senna had replaced at Lotus - spun on the warm-up lap and again on the opening lap.

Despite never having tested this car in the wet, Senna led by 2.5s on the opening lap, and simply disappeared into the distance. Behind him, drivers were spinning off left, right and centre in the dreadful conditions.

In his BBC TV commentary, 1976 world champion James Hunt remarked: "With the talent that Senna showed in Monte Carlo last year in those dreadful conditions, when he absolutely threw the Toleman around with wonderful control, I don't think it really matters what the Lotus is really like. He's got such a prodigious talent."

As Senna continued on his imperious way out front, de Angelis battled hard to keep Prost behind him. The rain intensified as the race progressed, and crashed cars had begun to litter the circuit as they failed to cope in the terrible conditions.

Rosberg shunted hard at the final corner, and his car was simply abandoned in the middle of the track for lap after lap until marshals finally shifted it. Nelson Piquet was so bored with the hopelessness of his Brabham-BMW's Pirelli tyres in these conditions that he pitted to change into a dry firesuit before eventually quitting. 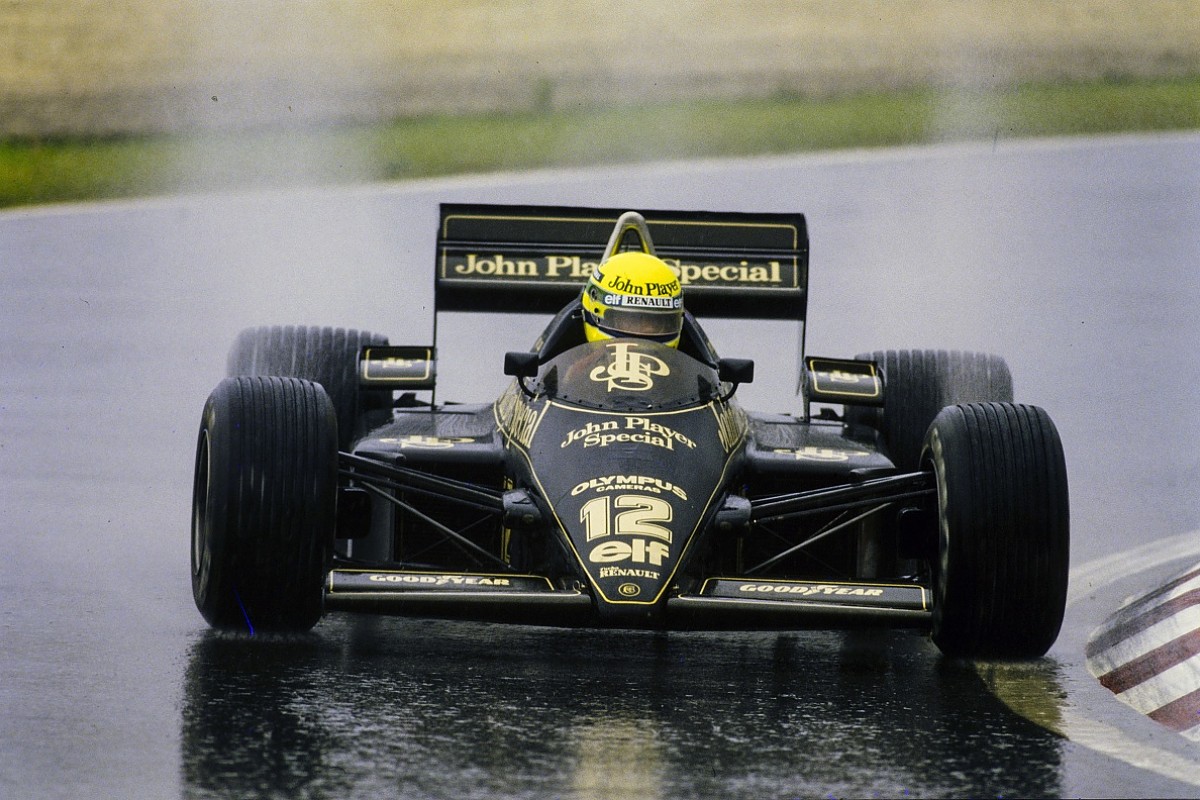 Senna began waving his arm to the officials, complaining that the heavy rain and standing water were too much to cope with. Proving how diabolical conditions were, Prost aquaplaned into the barriers as he crossed the start/finish line, and retired on the spot.

"It was a hard, tactical race, corner by corner, lap by lap," said Senna. "The big danger was that conditions changed all the time. It was difficult to keep the car in a straight line sometimes, and for sure the race should have been stopped. Once I nearly spun in front of the pits, like Prost, and I was lucky to stay on the road."

By the time of Prost's spin, Senna was already over 30s ahead of his opposition. Officials were keen to stretch the race distance to at least three-quarters, in order to award full points. In fact, it only had three laps trimmed from its planned duration by the time it hit the two-hour limit.

In just his 17th grand prix start, Senna won the race by 1m02.978s from Alboreto, with Patrick Tambay's lapped Renault completing the podium, as de Angelis faded to fourth.

"The car was sliding everywhere - it was very hard to keep [it] under control," said the man who'd just claimed the first of his 41 F1 victories.

"You often saw cars sliding about all over the place purely through lack of grip and too much power. The only problem [I had] with the car was the brakes, but under these conditions you expect that.

"Once you were close to someone, you could not see anything. People think I made no mistakes, but that's not true - I've no idea how many times I went off! Once I had all four wheels on the grass, totally out of control, and the car came back on the circuit.

"Everyone said 'fantastic car control' but it was just luck." 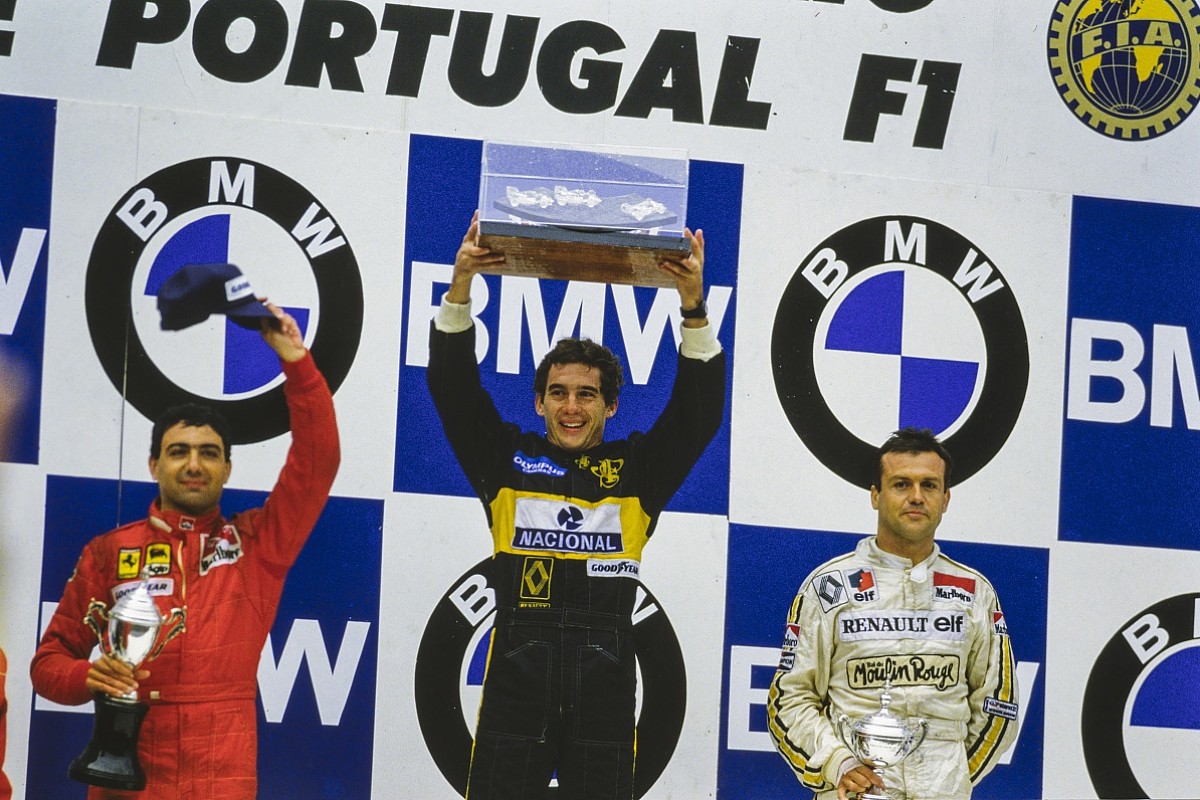 In his memoirs, Lotus team manager Peter Warr recalled Senna's conversation with journalist Denis Jenkinson following his first win and commended Senna's "completely ruthless honesty with himself" which, he said, "only served further to enhance his appeal" with his new team.

It was often said that Senna's European Grand Prix victory at Donington Park in 1993 was his greatest performance. But the man himself disagreed

"What was unarguable was that he had flawless balance in low-grip conditions and a surreal feel for the very limit of adhesion in changing track conditions."

Senna's joy at victory was unconfined, with seatbelts off and both hands waving in the air. The image of him returning to parc ferme - greeted by Warr and mechanics including Kenny Szymanski, who was literally jumping for joy - is one of the all-time classics.

When asked after the race what this first victory meant to him, he replied: "It means that all the years and all the effort I have put into motor racing, since [I was] four years old, are giving me something good back."

At the opposing end of his F1 career, it was often said that Senna's European Grand Prix victory at Donington Park in 1993 was his greatest performance. But the man himself disagreed: "No way! I had traction control," he said.

"OK, I didn't make any real mistakes [at Donington], but the car was so much more easier to drive. It was a good win, sure, but compared with Estoril '85 it was nothing, really!" 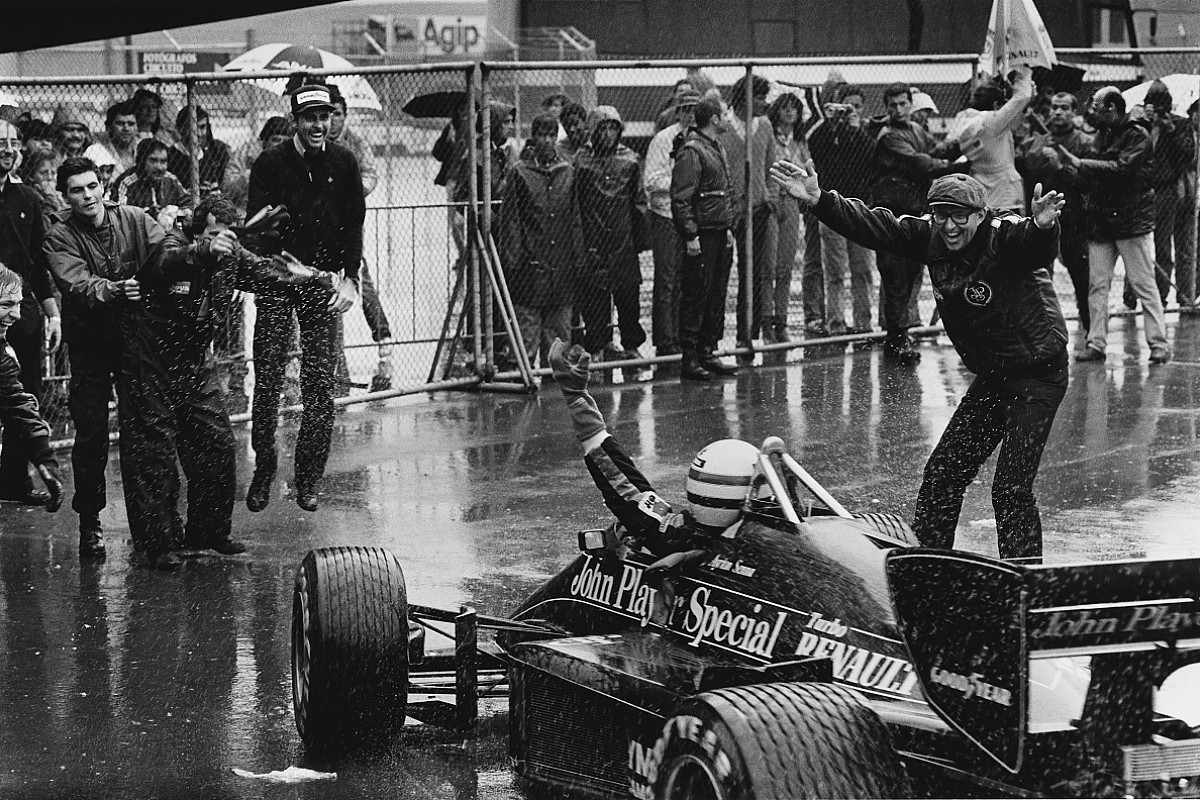