There was something different about Team Penske's IndyCar team at the start of 2019, and it was hard to pinpoint at first. It wasn't the performance of the cars on track - they remained fast, and the driver and primary sponsor line-up was the same as the year before.

But if you studied the Penske garages hard between or during test sessions, it would eventually have dawned on any regular onlooker that there was a notable absentee. Where was that little moustachioed guy, the one who always looked busy, and seemed to avoid making eye contact with anyone not wearing Penske logos?

Well, that man was general manager Clive Howell and, despite appearing to have stopped ageing soon after the age of 50, he was 63 when he retired at the end of the 2018 season.

This year, for the first time since 1979, Roger Penske started a season without this Surrey, UK-born human dynamo in his ranks. Perhaps that explains why The Captain himself still speaks of Howell (below) in the present tense. 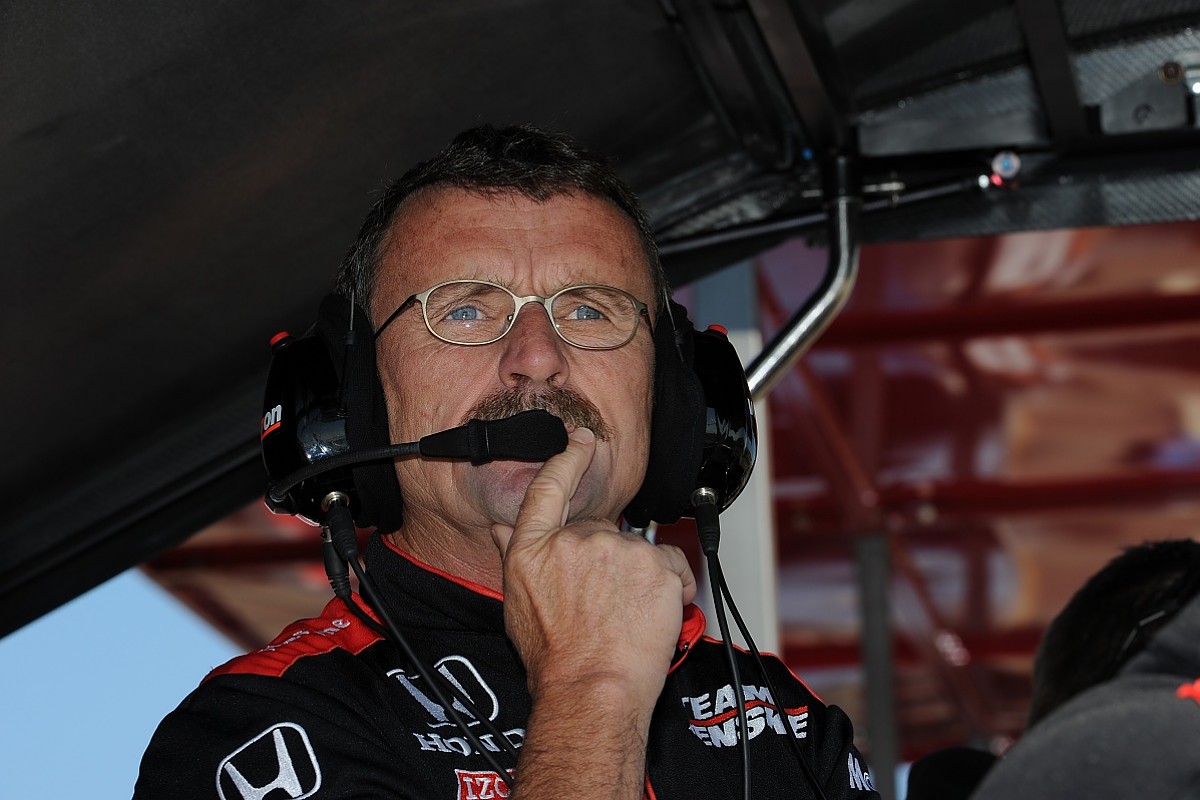 "Clive has been an important part of Team Penske for nearly four decades," says Penske. "His work ethic, his focus and his attention to detail helped him stand out when he joined Penske Cars in England in the late '70s. His leadership helped continue the growth of our IndyCar programme and his track record is remarkable - he was part of 15 Indianapolis 500 victories with Team Penske.

"Although he's retired, Clive is still a big part of our team and he always will be."

Team president Tim Cindric adds: "Clive began his career when mechanics had to know how to make the cars and put them together. He truly helped establish 'The Penske Way' of doing things."

Neither of their statements is surprising: it's easy to imagine Howell as a general leading troops into battle, winning, yet content to return without fanfare. Similarly his disciplined and zero-bullshit approach would also work wonders back at base. He is a man who commands respect.

Howell's businesslike approach to the business of motorsport - get on with the job and do it to the best of one's ability - means he tended not to regard one team member as more important than another, and he therefore took a lot of convincing that he was worthy of a feature in Autosport. Finally, thankfully, he acquiesced...

Born in 1955, Howell left school aged 16 to serve an apprenticeship at the British Aircraft Corporation (which in 1977 merged with Hawker-Siddeley and Scottish Aviation to form British Aerospace) at Brooklands, Surrey, and became a qualified toolmaker.

But his mother was secretary at Motor Racing Developments, the company formed by Sir Jack Brabham and Ron Tauranac and bought by Bernie Ecclestone at the end of 1971 and, even while Clive had still been at school, she got him in at the ground level there, cleaning parts. When he left BAC, he joined Brabham as a junior mechanic.

"I joined when Gordon Murray was chief designer, Herbie Blash and Charlie Whiting were still there, and we were running the Alfa Romeo flat-12 engine," Howell recalls. 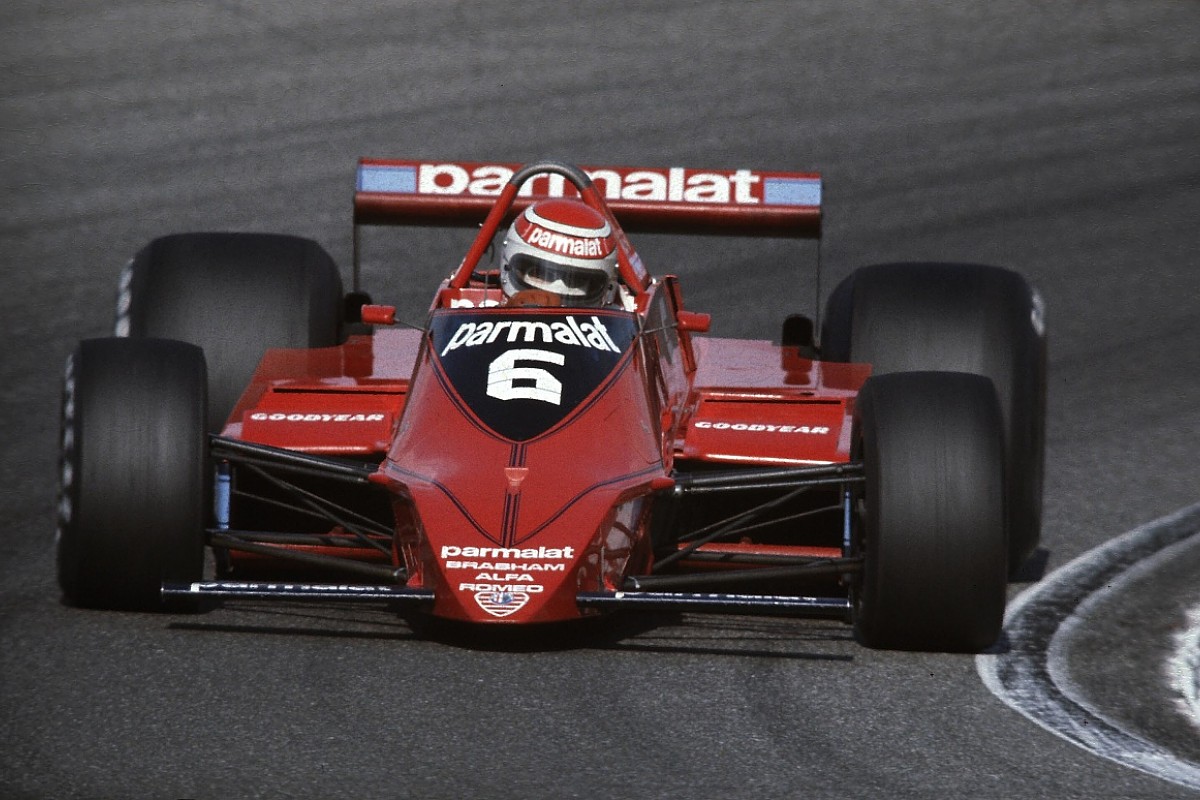 "It was a bit of a disaster - the only real success was Gordon's fan car that Niki Lauda won with at Anderstorp - and before the end of the '79 season we'd bailed on Alfa and gone back to Cosworth.

"I was working on Nelson Piquet's car that year - he was quick as a rookie right away, kept Niki on his toes, but that car never finished.

"Herbie wanted me to stay on as chief mechanic for 1980, but by then I'd had a call from Derrick Walker, who I'd overlapped with just for a short period at Brabham before he moved to Roger Penske's F1 team.

"When RP quit F1 and decided to focus on Indycars, Derrick went with him to America. So when I got a call from Derrick asking me if I'd be interested in working for Penske in the States, I thought about it in quite simple terms: I liked going to Watkins Glen, I liked going to Long Beach, but I didn't know anything about the big bit in between! So I thought, 'Yeah, I'll go for a couple of years, travel around America, see what it's all about.'

"So first I moved down to Penske UK, in Dorset, working under the tutelage of Nick Goozee and Geoff Ferris [designer] as a fabricator until the season started. Then I headed off to the States for 1980 as a mechanic on Bobby Unser's car and working out of Penske's base in Reading, Pennsylvania.

"I went from being mechanic for Bobby, to then leading the test team, working as crew chief on various cars, and ran the shop for a while. Then when Derrick left at the end of '87 to run the new Porsche team, there was a bit of a shake-up. Roger put Chuck Sprague in charge and I was Chuck's right-hand man until he was put in charge of the Marlboro Racing School.

"I then ran the race team until the Tim Cindric era started [in 1999], and that's been good for everybody there; he's a very accomplished guy. And I enjoyed being team manager, and general manager and all the other things that went with it." 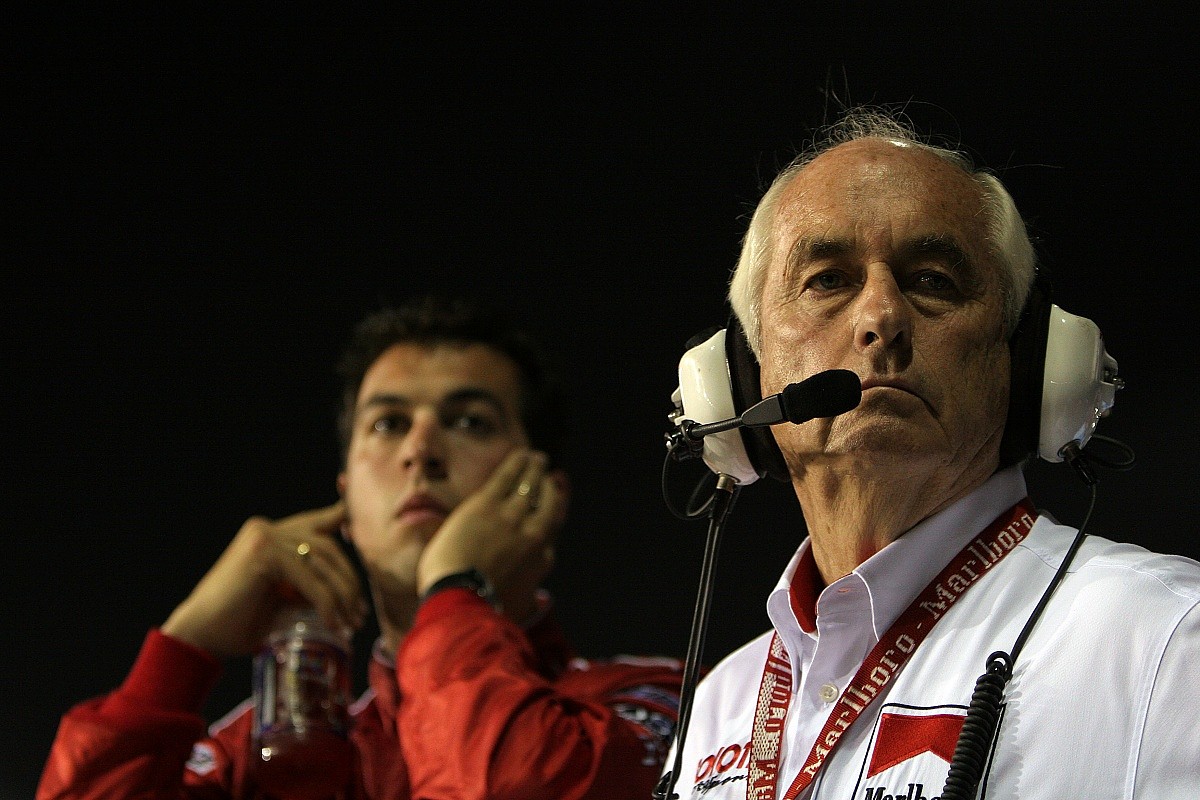 By anyone's standards, 39 years is an extraordinarily long time to stay at one team, and Howell says he could never have foreseen establishing such roots when he signed up.

"I knew some guys who'd gone to work for RP," he says, "and everyone told me he was a great guy to work for, it was a good environment and so on. But that's all I had. I mean, there are no guarantees in this business, are there?

"I like the security, and in this business working for Roger is about as close as you can get to a secure job" Clive Howell

"But once I was in, I didn't want to be one of those people who bounced around from team to team. Some people do that and maybe earn a little more money but they also go into the off-season wondering where the next paycheque is coming from because they're looking for their next job.

"That wasn't for me. I like the security, and in this business working for Roger is about as close as you can get to a secure job."

Unsurprisingly, Howell doesn't like the way IndyCar has become spec in all but engine and shocks/dampers. For him, job satisfaction came from two directions. One was "doing the oddball stuff when we felt as an engineering team we could really make a difference.

"Running that pushrod 209ci Mercedes for Indy in 1994 [pictured below] was great fun, but it felt like Anderstorp '78 with the Brabham fan car - we do the job, we win, and the authorities ban it right away!"

The second aspect he misses is the innovation and problem-solving from engineers working directly with the drivers.

He explains: "When I first came over, you could find big chunks of time through engineering. You'd have Bobby Unser dreaming up something, we'd be fabricating new underwings in the garage at midnight, and you'd be looking at it saying, 'Yeah, that looks about right, let's try that!' 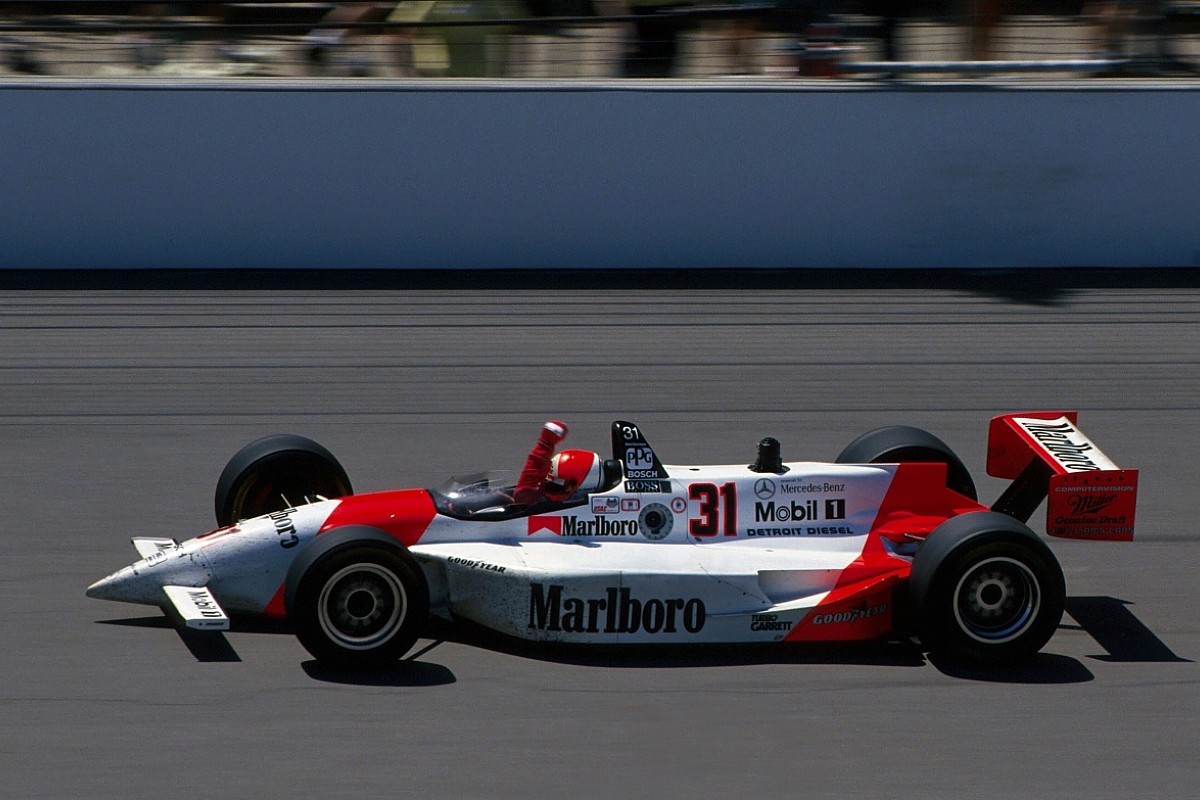 "The only proof you'd have was when it was on the racetrack, and Bobby or Rick [Mears] would set a time and come in and tell you how it felt.

"Compare that to now, where your hands are almost completely tied because it's all so spec. All you're allowed to do is change the shocks and change the wicker: that's not going to keep engineers happy.

"I mean, the guys running CFD [computational fluid dynamics] to get a read on the aero mapping probably gain satisfaction from that, but from what I've seen CFD is far too dependent on ideal-world scenarios, which rarely arise in the real world."

The fact that doing things 'The Penske Way' has less influence on engineering an IndyCar these days reduced Howell's love of racing, but it was a heartbreaking personal loss that brought his retirement forward a few years.

"Five years ago Mary died of cancer and that changed my outlook," he says. "I decided that as soon as I was in a position to retire, I'd start doing the other stuff that I wanted to while I still can. I love touring on my motorbikes, and although I'd ridden up and down the east coast, I'd never done anything out west.

"I bought a toy-hauler - like a camper but with 10 foot of garage space out back for storing a bike - so I can drive out west of the Mississippi River, and even on to Texas, and then go touring on the bike.

"So that's what you'll find me doing a lot of the time now - making a trip or planning one." 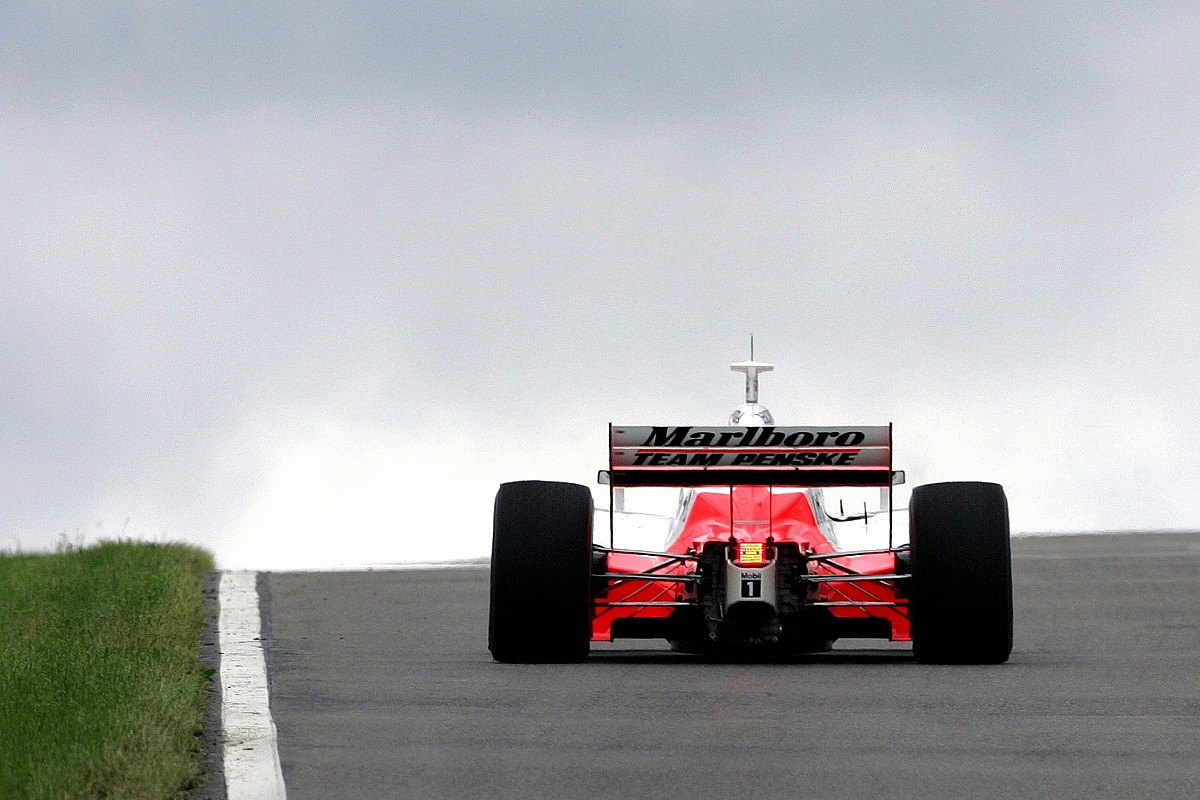 Clive Howell, as an enthusiastic 22-year-old Brabham employee, was standing at the pitwall at Kyalami for the 1977 South African Grand Prix when Renzo Zorzi's Shadow expired on the other side of the track, smoke wisping gently from its engine. A few feet away from Howell, two young marshals responded by running from the pitwall across the track.

The one carrying the fire extinguisher, Frikkie Jansen van Vuuren, never made it. They were just beyond the brow of a hill and suddenly four cars appeared at 170mph; one was Zorzi's team-mate, Tom Pryce, who struck van Vuuren and the extinguisher, the impact killing both driver and marshal.

"Drivers go in and out of your life according to contracts or death, so I've never wanted to get close with them. The only driver I've ever regarded as a friend is Rick Mears" Clive Howell

This was one incident that would have persuaded Howell never to get too close to drivers. The one that convinced him he was right came in 1999 when cheery and talented Gonzalo Rodriguez was killed in a Penske at Laguna Seca.

"Hanging out with them away from the track isn't my idea of fun because drivers at this level are generally selfish bastards. I'm sure that's what makes them fierce competitors, but it doesn't make them congenial company.

"I liked calling the races for Paul Tracy at the start of his career, although he could be brutal. I liked spotting for Helio [Castroneves] - him and Gil de Ferran made a good team - and I liked working with Will [Power] because he was young and eager to learn 'The Penske Way', so if you told him to jump, he'd ask how high. But they're working relationships, and that's far as it needs to go.

"When [Juan Pablo] Montoya came to the team [in 2014], he was the epitome of your typical racecar driver. Tim Cindric had asked me to call the races for Juan and I said, 'OK, if you can't find anyone else.' Well that lasted until Detroit [round six]. Juan ripped into us about something or other, and I think it's important to maintain self-respect so I told him to go f**k himself."

Brabham F1 drivers from the first stage of his career didn't impress Howell much either.

"They all seemed a bit aloof from where I was standing, but that may have just been because I was new on the scene," he says. "John Watson was a decent and polite guy but I can't say I really knew him.

"The only driver who I've regarded as a friend is Rick Mears [pictured below with Penske]. We can hang out and talk about racing but also motorbikes, boats, remote control planes and so on. Maybe it's because he's the only top driver I've worked with who didn't come across as a headcase in some way or other!"

This feature was first published in the Autosport Engineering supplement, which appears within the magazine every other month. Click here to see the full list of previously published Engineering articles 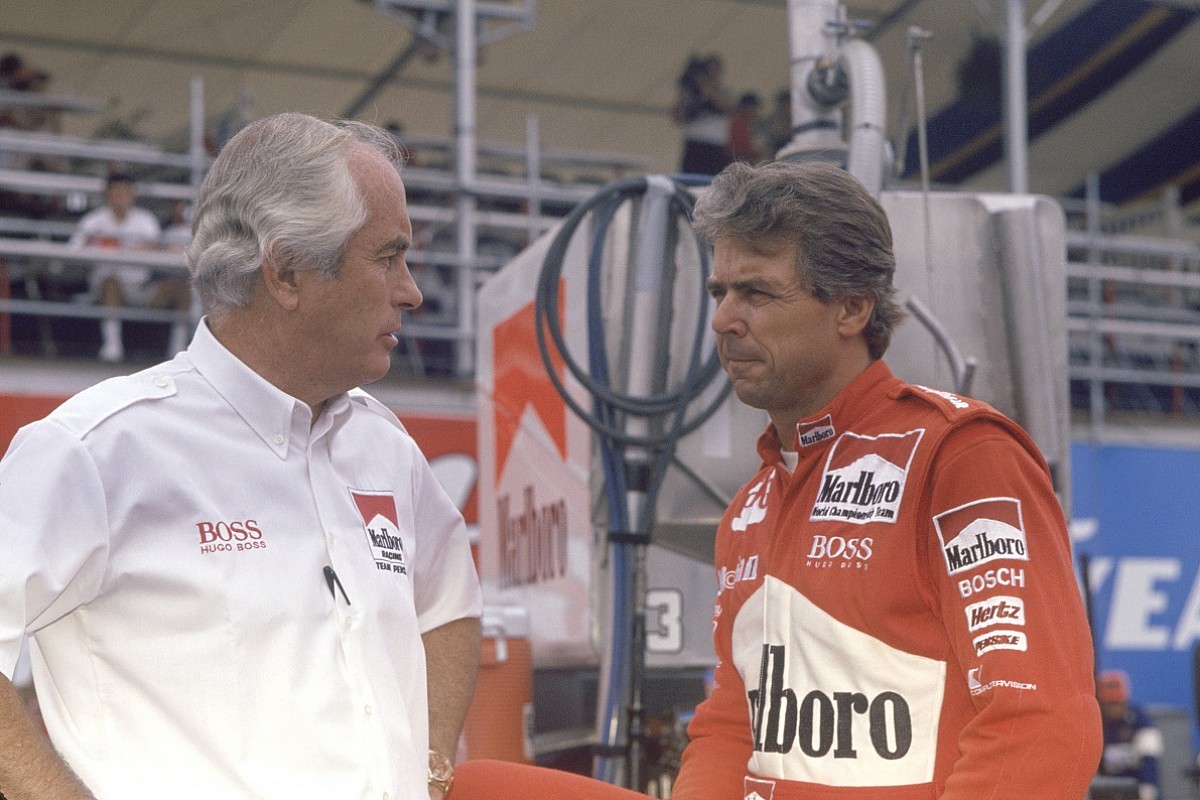