DTM points leader Sheldon van der Linde pipped his brother Kelvin to pole in qualifying at the Nurburgring in a repeat of their finishing order from race one.

After qualifying for Saturday’s first race was cancelled due to fog, which caused the race to be delayed by several hours, conditions on Sunday morning were much improved and dipped under the pace-setting practice times set on Friday by SSR Porsche driver Dennis Olsen.

The Norwegian would end up third behind the on-form South African brothers, while Lucas Auer tumbled to 10th in the final classification after heading the times into the closing minutes.

Confirming that his pace on Friday had been no fluke, Olsen set the early running and led team-mate Laurens Vanthoor at the halfway point in the quick-fire 20-minute session.

Auer, who had elected to stay in his garage during the early exchanges, then emerged to make the most of the free track and pumped in two laps good enough to usurp Olsen before the remainder of the field re-entered the fray.

But the Winward Mercedes’ spell atop the leaderboard was short-lived as Sheldon van der Linde whisked his Schubert BMW to the top of the times on a 1m25.945s.

Thomas Preining’s Bernhard Porsche also ducked under Auer’s 1m26.126s to go second, before Olsen deposed both of them on a 1m25.973s.

That time was then matched by Mirko Bortolotti, despite the addition of 20kg to his Grasser Lamborghini in the latest Balance of Performance tweak, although the Italian will take a five-place grid penalty for his contact in race one with Felipe Fraga and start ninth as a result.

But both Olsen and Bortolotti demoted by a last-gasp effort from Kelvin van der Linde, who had been 18th prior to setting a time just 0.010s slower than his younger brother. 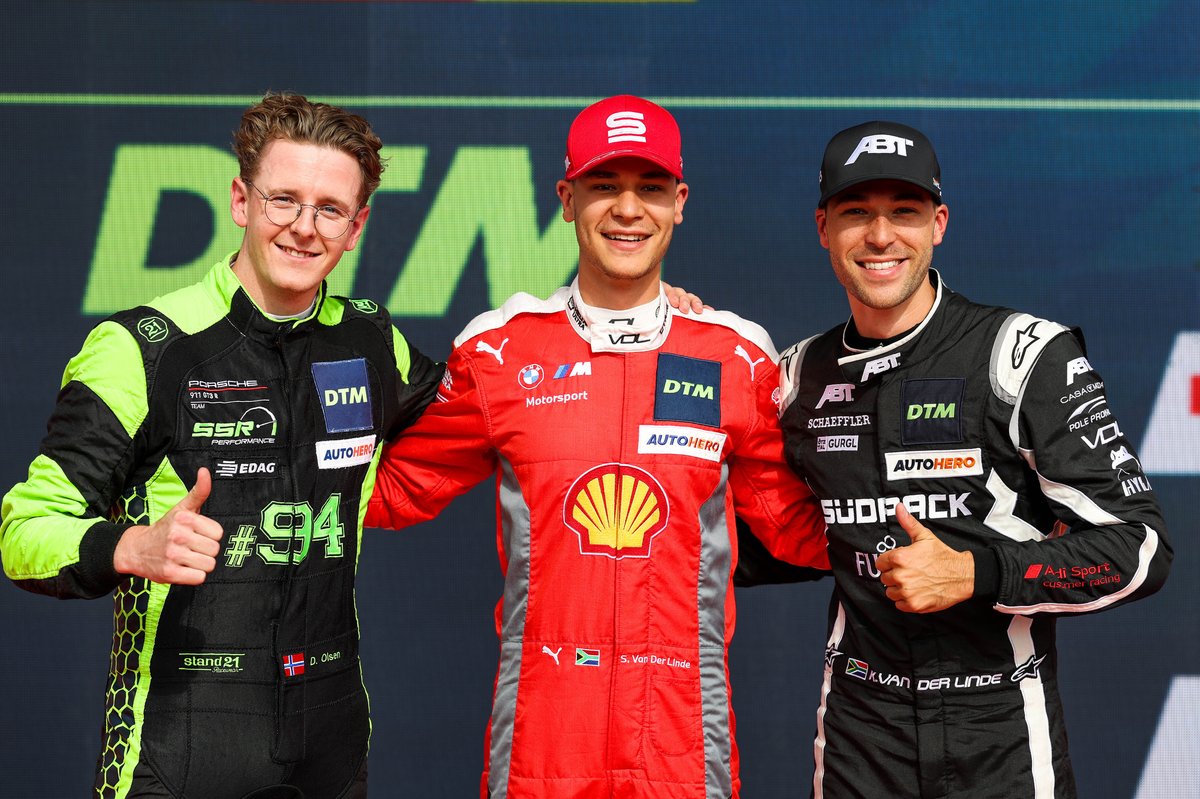 The Abt Audi man’s effort was all the more impressive as team-mates Rene Rast and Ricardo Feller both struggled to 17th and 23rd fastest respectively.

Preining is elevated to fourth by Bortolotti’s penalty, ahead of Philipp Eng (Schubert BMW), and defending champion Max Gotz, Auer’s team-mate the leading Mercedes in sixth.

Luca Stolz, who was turned around on the opening lap of Saturday’s race, will start seventh in the Haupt Racing Team Mercedes ahead of Vanthoor, Bortolotti and Auer.

After his race one disappointment, Fraga could only qualify 16th with 15kg added to his Red Bull Ferrari in BoP weight.