The nine-time World Rally champion lost his brakes in the first two miles of the short 19-mile opening stage near Piscop and dropped 5m37s to leader Nasser Al-Attiyah's Toyota.

"It was terrible for me because I lost the brakes completely after three kilometres, and I did 28 kilometres without brakes at all," said Loeb, who has called this year's Dakar his "last chance" to win as Peugeot will withdraw from cross-country rallying afterwards.

"I had to go very slow because it was quite tricky over the crests of the dunes: you couldn't see the downhill and it was easy to make a mistake.

"It was important not to take any risks in this situation, so I just finished the stage, this is what I wanted after the problem.

"I think it's just a brake problem so in the service it shouldn't be a problem [to fix]."

Loeb's issues came as all four of Peugeot's factory 3008DKR Maxis began the Dakar outside the top 10. 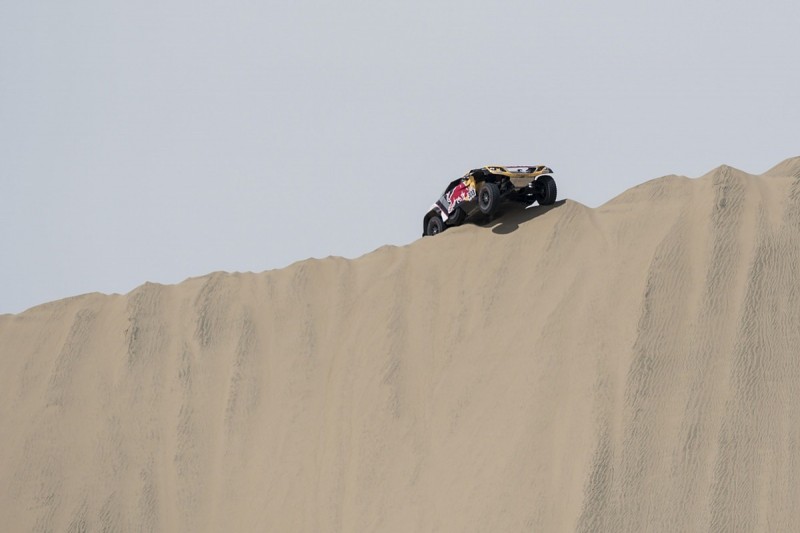 Defending winner Stephane Peterhansel opened the road but was only 11th-quickest, losing 2m15s to Al-Attiyah, while Cyril Despres and Carlos Sainz ended up down in 15th and 16th places.

Peterhansel said the high sun meant the dunes were hard to navigate properly, and he therefore opted to take the opening stage easy.

"I was not really confident in the dunes today," he said. "The sun was really high, so there was no shadow at the top of the dunes which made them difficult to read.

"I decided to take these 30 kilometres at the speed of a tractor. With the light and these type of dunes, I went on the defensive.

"Proportionally we lost a lot of time to Nasser. Two minutes in 30 kilometres is a lot, but we have to ease into the race and recover the good feeling."