After Saturday's 19-mile opener, the second timed stage - a 166-mile loop that started and concluded near small Peruvian town Pisco - was the first proper marathon run of the event and largely comprised off-road sections.

None of the Peugeots had cracked the top 10 on stage one, but the manufacturer was ahead at every waypoint this time.

That vaulted Despres from his overnight 15th place to the overall lead, 27s ahead of Peterhansel.

Toyota driver Giniel de Villiers was best of the rest behind the three leading Peugeots on stage pace, trailing Despres by 7m26s as he moved into third overall.

His team-mate Nasser Al-Attiyah, opening the road after he had topped Saturday's stage, lost almost double that, finishing the run in eighth place.

Al-Attiyah said part of the time loss was down to his co-driver Matthieu Baumel being unwell.

Loeb is sat fourth overall, between de Villiers and Al-Attiyah, after his brake trouble-induced time losses on Saturday. 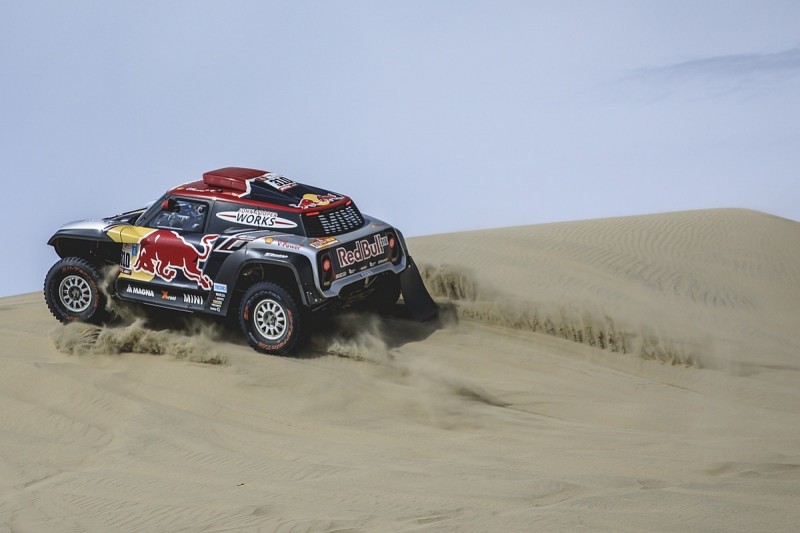 The stage was a particularly bruising one for the X-raid Mini outfit, with two of its three all-new buggies sustaining damage and dropping out of contention.

Rookie Bryce Menzies, who was fourth after the short opener, rolled just over a mile into Sunday's timed section and was unable to carry on, his Red Bull-liveried two-wheel-drive challenger reduced to a torn-up wreck.

The American was unhurt but will not continue in the rally, and his co-driver Peter Mortensen is understood to have suffered a broken ankle.

Fellow buggy driver Yazeed Al-Rajhi got further into the stage before colliding with the X-raid Mini John Cooper Works Rally car of Boris Garafulic, with both crews stranded as a result of the incident.

Orlando Terranova, driving a regular Mini four-wheel-drive car, finished as the top X-raid representative on the stage, placing between de Villiers and Sainz in fifth.