Al-Attiyah completed the timed section of the stage in 21m51s in his four-wheel-drive Toyota Hilux car, and will therefore have to open the road during the first proper marathon run of the event on Sunday.

Their trouble-free start to the event was in stark contrast to Loeb's, the nine-time World Rally champion ending up almost six minutes slower after his Peugeot 3008DKR Maxi developed a brake issue in the opening miles.

The Saturday stage, first of the five that comprise the Peruvian leg of the rally, was made up of a 150-mile road section between the ceremonial start in the capital and Pisco, and a 19-mile timed special traversing sand dunes around the latter. 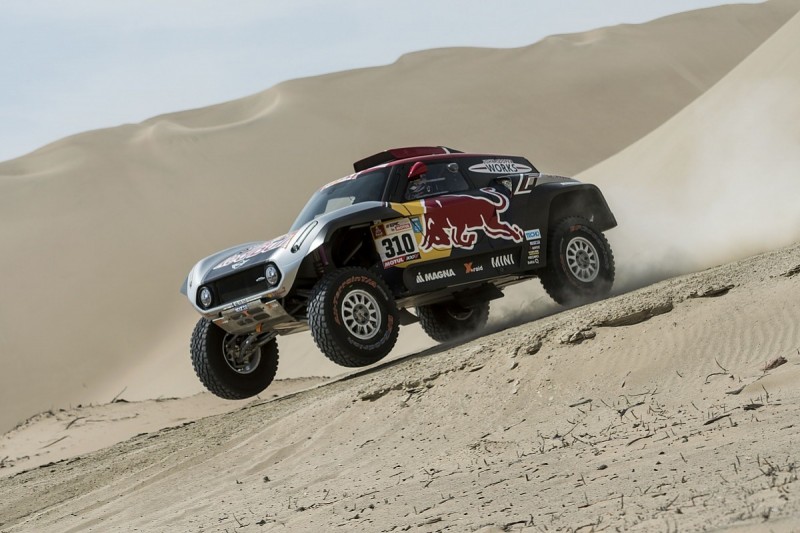 The two other Mini buggies in the field finished eighth and 13th, in the hands of Mikko Hirvonen and Yazeed Al-Rajhi respectively.

Back with X-raid after a single Dakar with Toyota, 2014 winner Nani Roma was the best of Mini's four-wheel-drive John Cooper Works Rally cars in fifth.

He was only a second quicker than Toyota's Giniel de Villiers, both slotting in within a minute of stage leader Al-Attiyah.

Loeb's issue aside, Peugeot had a muted showing on the opening stage, as all four of its factory entrants missed the top 10.

Last year's winner Stephane Peterhansel, having opened the road, was the leading Peugeot, finishing two minutes behind Al-Attiyah in 11th and just a few seconds up on squadmates Cyril Despres and Carlos Sainz.