Carlos Sainz says the Peruvian leg that opened the 2018 Dakar Rally has been "too much" for amateur drivers, amid a host of early retirements from the gruelling event

Following another day of high attrition through the dunes, the three remaining works Peugeots have pulled well clear of the opposition.

The fourth 3008DKR of Cyril Despres suffered suspension damage on Tuesday, Toyota's lead drivers Nasser Al-Attiyah and Giniel de Villiers have dropped an hour away from the front and Mini drivers Bryce Menzies and Nani Roma both fell victim to early crashes.

With even the factory crews struggling, Sainz - who currently sits third behind team-mates Stephane Peterhansel and Sebastien Loeb - says the route is too challenging for the amateur contingent making up the field.

"The stage has been very difficult, the hardest at the moment," he said at the end of Tuesday's stage.

"It's a mixture of very complicated dunes; soft, very broken, and with falls. And areas of stones too.

"The start was extremely hard. I think for amateurs it has been too much, because today I do not know how many cars will finish the stage." 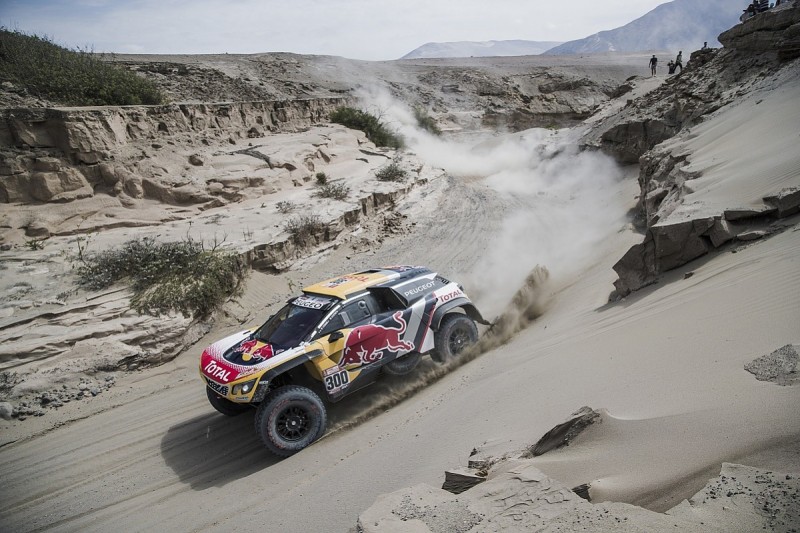 Leader Peterhansel agreed with his team-mate.

"For us it's OK because we are the factory cars, we have the best co-drivers and we are good drivers," he said.

There were 43 retirements across all classes from the first three stages, while only 49 of the 73 competitors in the Car class that started the fourth stage made it to the end within six hours of stage winner Loeb.