Sebastien Loeb held off Peugeot team-mate Carlos Sainz to win his first stage of the 2018 Dakar Rally, as Stephane Peterhansel held on to lead overall after the fourth stage

Nine-time World Rally champion Loeb was fourth heading into Tuesday and had admitted he lacked experience with the type of terrain prevalent in the opening Peruvian leg of this year's Dakar.

But Loeb then topped the 205-mile timed special - the longest test of the rally so far - around Peru's San Juan de Marcona, as he recorded his 10th career Dakar stage win.

Loeb led for most of the stage, briefly dropping behind last year's winner Peterhansel, only to reclaim first place on the stage.

He ended the day 1m35s quicker than nearest rival Sainz, with Peterhansel making up an all-Peugeot top three as he finished three minutes off the pace.

This was enough for the 13-time Dakar winner to end Tuesday seven and 13 minutes ahead of Loeb and Sainz respectively in the general classification. 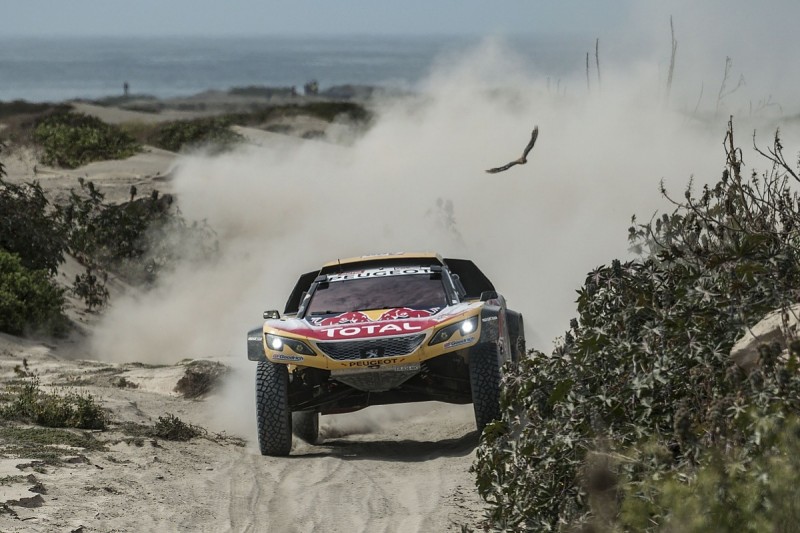 Having escaped any major dramas, the trio have had their Dakar 2018 hopes boosted significantly by another day of high attrition.

Fellow Peugeot driver Cyril Despres, who was second heading into the day, was the big name to drop out of contention during stage four.

Despres, a five-time Dakar winner in the bike class, was halted by suspension damage on his 3008DKR Maxi and was left waiting for assistance just over the halfway point of the test.

Al-Attiyah soon resumed the rally in his Toyota Hilux but struggled to maintain pace and went on to complete the test 54 minutes down on Loeb.

He is now almost an hour down on rally leader Peterhansel in the overall classification.

The other Dakar winner in Toyota's roster - 2009 champion Giniel de Villiers - had his hopes of toppling the Peugeots dealt a heavy blow, as he was one hour and 13 minutes off Loeb's pace through the stage.