Guerrieri spent the majority of the final 10 minutes of the second half-hour session in third, but he set a personal best time in the first sector and was fastest of all in the second and jumped to the head of the pile as the chequered flag fell.

That best lap compared to the 1m22.234s Norbert Michelisz set in his TC1 Honda Civic in the second World Touring Car Championship practice session at the same venue a year earlier, which was held in dry conditions.

Ehrlacher, the nephew of four-time WTCC champion Yvan Muller, was a quarter of a second clear of third place man Thed Bjork, who had set the earlier set the pace in the damper first practice in his Hyundai i30 N.

Bjork looked as though he might have grabbed top spot again with his final lap in FP2, but a slow middle sector negated the fastest times of all he managed over the rest of the lap and limited him to third.

The similar BRC Racing Hyundai of Gabriele Tarquini was fourth, ahead of the leading Cupra of Pepe Oriola and TCR International Series champion Jean-Karl Vernay.

Three-time British Touring Car champion Gordon Shedden was 24th in the first session, but improved to 10th in FP2 in his first practice sessions as a World Touring Car driver. 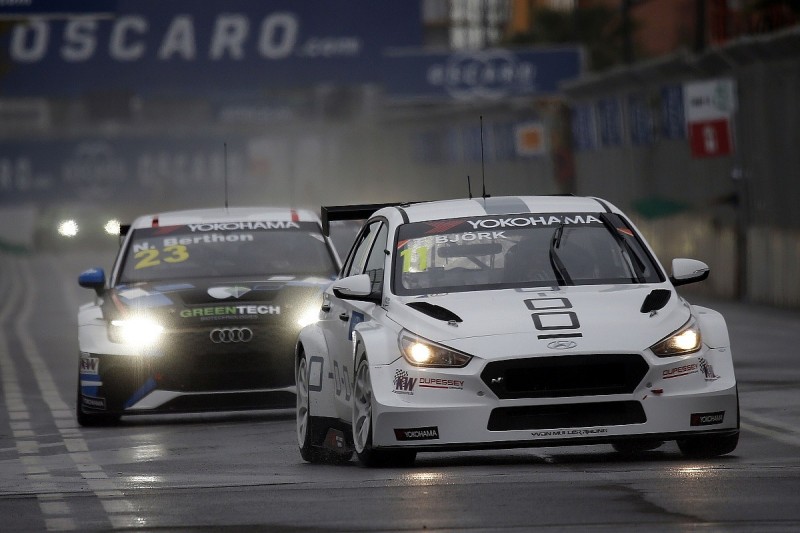 Last year's WTCC champion Bjork recorded a 1m32.821s in first practice, which left him with a 0.041s advantage over team-mate Muller.

Huff was third fastest in that session, seven hundredths off the pace, while Oriola and Vernay completed the top five ahead of the third and fourth Hyundais of BRC drivers Norbert Michelisz and Tarquini.

Michelisz brought out the only red flag in either session when he stopped his i30 N on the run to the final two corners, and was the only runner not to set a competitive time in FP2.

A number of drivers were caught out at the Turn 4/5 chicane and the Turn 7 stop at the end of the back straight in both sessions, including Zengo Motorsport's Zsolt David Szabo - who damaged his suspension on his final lap before hitting the Turn 7 barrier at the end of the first session.

The Honda change that could revive its WTCR title hopes