Argentinian Guerrieri managed a haul of 69 points over the weekend with a pair of pole positions and wins in the first and third races, and a seventh place in the reversed-grid race two, to rise from fifth to second in the standings.

He is now 22 points behind Lynk & Co driver Ehrlacher with two WTCR rounds left to run.

Guerreri was chased all the way by Ehrlacher for his first win on Sunday morning, on a dry day at the Hungaroring following persistent rain throughout practice and qualifying on Saturday.

Ehrlacher and his uncle Yvan Muller both passed front-row starter Mikel Azcona in his Zengo Motorsport Cupra into Turn 1.

But Guerrieri's team-mate Nestor Girolami repaid his Munnich Motorsport mechanics for their hard work in building up a new Civic Type R TCR for him, following his heavy crash at the Slovakia Ring a week ago, as he passed Muller on lap two to claim third place.

Hungarian Bence Boldizs started from pole for the reversed-grid race in his Zengo Motorsport Cupra, but quickly fell away to finish sixth, as Muller and Ehrlacher controlled the pace from the front.

Four-time World Touring Car champion Muller allowed his nephew to pass him on the first lap to aid his title cause, then rode shotgun to complete a Lynk & Co 1-2. 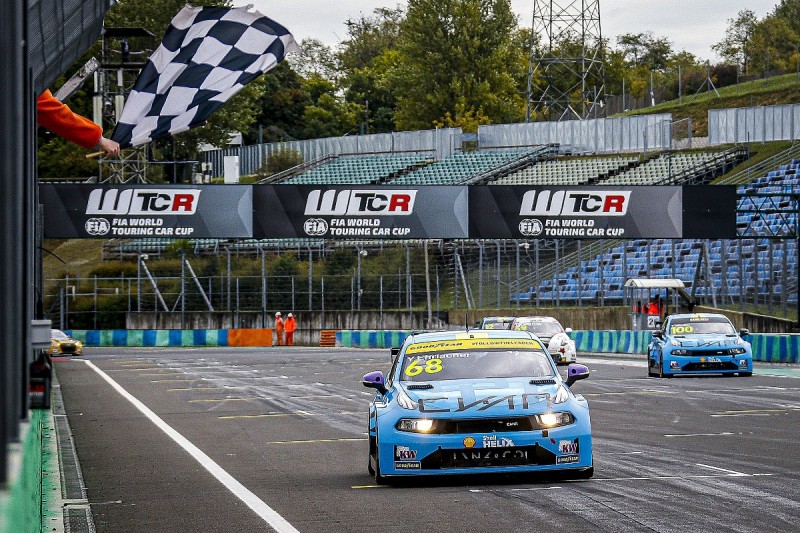 But Guerrieri had a chance to slash Ehrlacher's points lead in the finale, and took it, as the four Hondas locked out the first two rows of the grid.

Tiago Monteiro and Girolami protected Guerrieri, who was slowed by a loose wheel arch liner and front splitter from damage sustained during race two.

"Thank you to my team-mates and friends for this big help," said Guerrieri of Monteiro and Girolami.

"It was really difficult to brake, I had no acceleration and obviously the aero balance was completely disturbed, so it was hard.

"The car was a little bit all over the place but they supported me so well, I could push as hard as I could while not having to defend."

Girolami's second podium finish of the weekend followed contact with Azcona in race two, which gave his mechanics another race against time to repair his badly deranged rear suspension.

The Spaniard's Cupra was also damaged in the incident, but he fought back in race three to beat Vernay to fourth place.

Ehrlacher played it safe to bank points and finished where he started, in eighth position.