The 48-year-old won the reverse-grid race two in his Comtoyou Racing Audi RS 3 LMS, after his team-mate Nathanael Berthon claimed race one from pole position. Engstler Hyundai driver Nicky Catsburg completed the hat-trick of maiden wins in the third race of the day.

Berthon lost the lead at the start of race one, which took place on a drying track after a morning shower. Most drivers chose slick Goodyear tyres for the front and wet-weather rubber for the rear, but the Frenchman still struggled for grip because he was starting on the wetter left-hand side of the track.

Fellow front row starter Catsburg took the lead, but soon began to struggle for pace with a car set up for dry conditions. Berthon passed him on lap three, as the Dutchman slipped back to 17th by the end of the race.

Gabriele Tarquini made a fast start from fifth on the grid to finish second for Hyundai, as the South Korean manufacturer returned to the WTCR after missing the previous round at the Nurburgring over a Balance of Performance row.

Behind the veteran, Jean-Karl Vernay scored his first podium finish for Team Mulsanne in his Alfa Romeo Giulietta.

Title challenger Nestor Girolami, who started the weekend second in the standings, was on pole position for the reverse-grid race 2 and hoped to make up ground on WTCR points leader Yann Ehrlacher, whose Cyan Racing Lynk & Co was uncompetitive in Slovakia, largely thanks to the success compensation weight the Chinese cars were forced to run with. 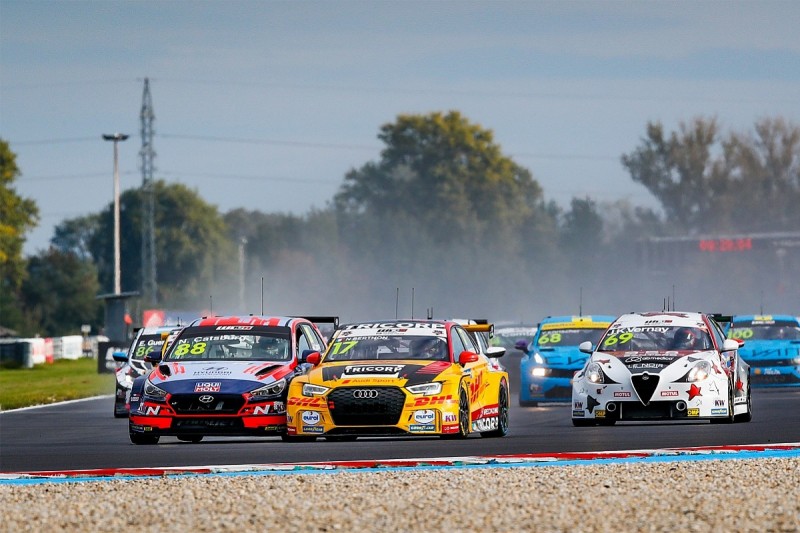 But Girolami had a poor start and first corner, slipping to fourth, as Munnich Motorsport's Esteban Guerrieri and Coronel shot to the front, from fifth and seventh on the grid respectively.

The safety car was called following first-lap contact between Attila Tassi's Honda and Tarquini, which left both beached in a gravel trap. Once racing resumed on lap five, Guerrieri struggled to build a gap to the train of cars running close behind him.

Coronel made his move at the long right-hand final corner on lap eight, as Guerrieri left a gap. Rookie Comtoyou team-mate Gilles Magnus also passed the Honda at the first turn on the next lap to complete a team one-two.

"I knew I had a chance, we have always been fast here," said an emotional Coronel. "Finally!

"I saw the gap and boom! It is what we are always fighting for."

Girolami's raced ended in a big accident on the last lap when Vernay inadvertently tapped him into a steel barrier.

The Argentine was lucky to escape without injury, but his Honda was destroyed in the impact, which looks to have spelled the end of his title challenge.

In race three, Berthon again started from pole position, but failed once more to establish a lead.

This time reigning champion Norbert Michelisz, starting alongside him on the front row, got the jump, as did Catsburg from third on the grid.

The two Hyundais ran side by side through Turns 1 and 2, as Tarquini was again tapped into the barriers. Then Vernay nudged Michelisz into a half-spin, claiming the champion had braked in a corner that is usually taken flat.

The incident gave Catsburg a lead he would not lose and he headed Vernay to the flag to break his WTCR duck.

Berthon was third for his second podium finish of the weekend.

Ehrlacher went into damage limitation mode in Slovakia to protect his points lead, coming away with a ninth, an eighth and an 11th from the three races.

He now leads Coronel by 20 points, with Vernay rising to third, three points further back. Girolami has dropped to eighth in the standings.