Muller started race two from pole position in his Cyan Racing Lynk & Co, but Vernay had the inside line into the fast chicane at Turns 1 and 2 to take a lead he would not lose.

A last-lap safety car intervention for a dislodged tyre stack gave Vernay a late headache, the stewards adding two laps to ensure the race ended under green flag conditions. But he survived what became a one-lap shoot out to claim his first win since the opening weekend of the season at the Nurburgring.

“The start was the key, we said it yesterday,” said Vernay. “I did a much better job than Yvan. I really wanted this one. Yesterday I was annoyed after Q3 not to have pole position. But after the start it was just a case of managing the tyres in case of a safety car which arrived with a surprise for the last lap.”

Norbert Michelisz ran third in the early stages, but reported a vibration as his pace slowed, the Hungarian triggering a late flurry of action around the tight, picturesque 1.88-mile circuit.

Santiago Urrutia hit him twice on successive laps, receiving a stewards’ warning, as the following pack closed up behind them. As the action tightened up, race one winner Frederic Vervisch made an opportunistic move to demote Esteban Guerrieri for fifth, the pair making contact and the Munnich Motorsport Honda driver losing another crucial place to points leader and title rival Yann Ehrlacher.

Urrutia and Vervisch both passed the struggling Michelisz on lap 18 of what was supposed to be a 20-lap race. Then on lap 19, as Ehrlacher found himself held up by the Hyundai, Guerreri made his move on the reigning champion at the back chicane. The Honda hit a tyre stack on the way in and forced Ehrlacher to cut inside the second on the way out, with Michelisz remaining ahead of both. 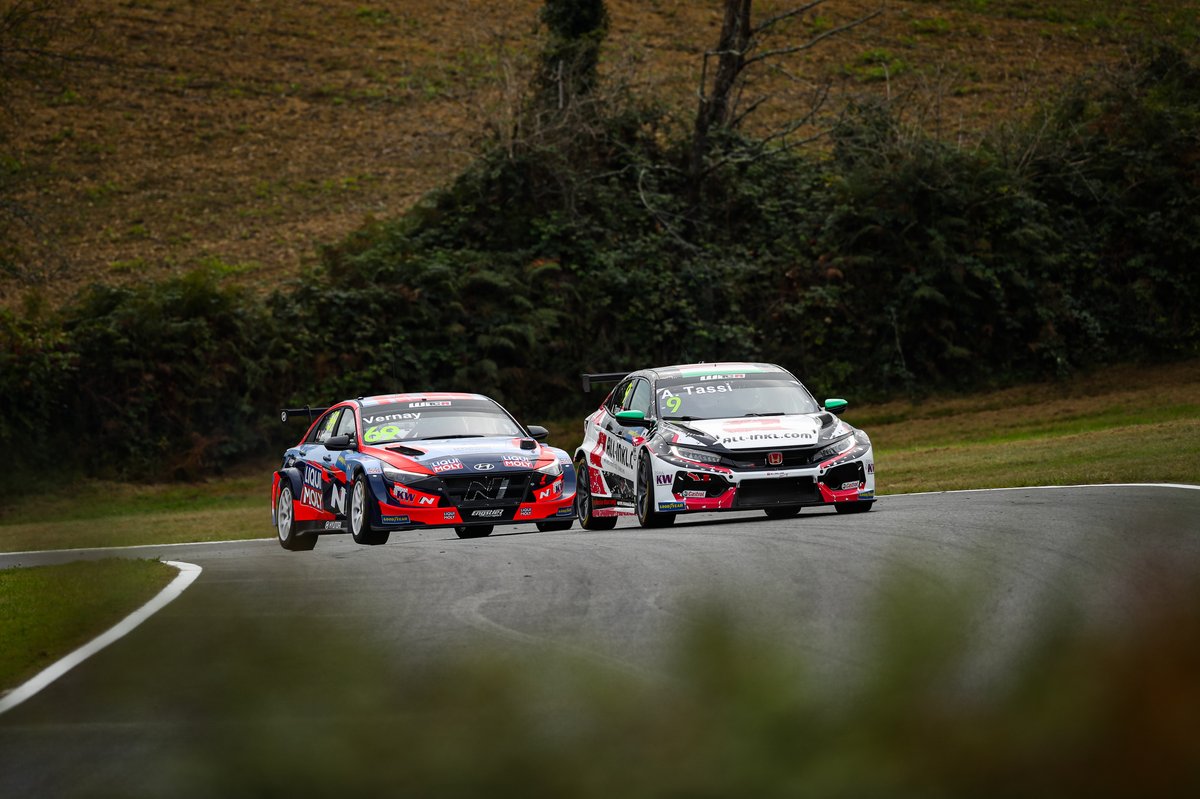 The safety car was called on as the errant tyre stack was moved back into position. When racing resumed thanks to added laps, Ehrlacher demoted Michelisz on the run to the finish line to claim fifth behind Vervisch, with Guerrieri finishing seventh.

The result leaves Ehrlacher with a diminished lead in the points standing. Vernay has now jumped up to second place, 16 points down on the Frenchman, with Guerrieri having dropped to third, 22 points behind the leader. Vervisch has risen up the rankings to fourth.

Earlier in the day Vervisch became the first two-time winner of the 2021 WTCR season with a lights to flag victory from the reversed-grid pole position in race one.

The Belgian’s Comtoyou Audi RS3 just held off fellow front row starter Thed Bjork into the fast chicane that makes up Turns 1 and 2, but there was trouble behind him when Ehrlacher inadvertently tagged Tiago Monteiro’s Honda, the ex-Formula 1 driver hitting the barriers with force at Turn 3.

Following a safety car intervention, Vervisch got the drop on Bjork when racing action resumed on lap seven and he was in the clear. “It was a bit tight at the start,” said the Belgian. “Björk got a better start than us and contact was very light, but the key was to stay in front at the start. I had a mega restart after the safety car and I’m very happy. Thanks to the team, they deserve this because we’ve had a hard time this season.”

Gabriele Tarquini started and finished third in his Hyundai, with Guerrieri fourth ahead of his Munnich Motorsport Honda team-mate Nestor Girolami. Most race two winner Michelisz gifted sixth to fellow Hyundai driver Vernay to aid the Frenchman’s reviving WTCR title ambitions, with Ehrlacher only eighth from sixth on the grid.

“It was a difficult start for us,” he said. “We had a small issue at the start which made us bog down and I lost two positions.”

The WTCR will head to Adria in Italy on 6-7 November for the penultimate meeting of its season, ahead of the finale at Sochi in Russia on 27-28 November.