Frenchman Vernay struck first in race one on Sunday morning as he swept into the lead from third on the grid, as reigning WTCR champion Norbert Michelisz made a poor start from pole position. The Hyundai driver blocked Gilles Magnus' Audi on the left, giving Vernay's Team Mulsanne Alfa Romeo a clear run on the outside line in the first turn.

Cyan Performance driver Santiago Urrutia made a great start from seventh to pass Magnus for second. "The Alfa was too quick on the straight, so I was not quite quick enough to win," said the Uruguayan, who is in his maiden WTCR season.

Spaniard Azcona, who finished fourth in race one, inherited the reversed-grid pole position for race two, following a spate of track limits violations in qualifying.

The Zengo Motorsport driver made the best of it by taking a lights-to-flag victory for what was the Hungarian team's first win in five years and the first in the WTCR for Cupra's new Leon.

Cyan's Yvan Muller climbed to second from fourth on the grid in his Lynk & Co, as Urrutia starred again to score another podium behind the four-time World Touring Car Champion.

Vernay had appeared to earn a birthday pole position on Saturday afternoon in the shootout Q3 session for race three, but was angered to be stripped of his time for violating track limits.

He would start fifth, leaving Magnus to claim the pole in his Comtoyou Audi.

The Belgian wrapped up the rookie of the year award in Aragon, but made a poor getaway, as Bjork's Lynk & Co took the lead from second on the grid. Magnus would drop to fifth by the finish as Urrutia again put in a scene-stealing performance.

Starting third this time, he made contact with Magnus in Turn 1 and, after a safety car intervention - to clear Nestor Girolami's Honda after Luca Engstler's Hyundai had piled into it at the end of the long back straight - he continued his attack on Magnus, passing the Audi for his third consecutive podium finish of the weekend. 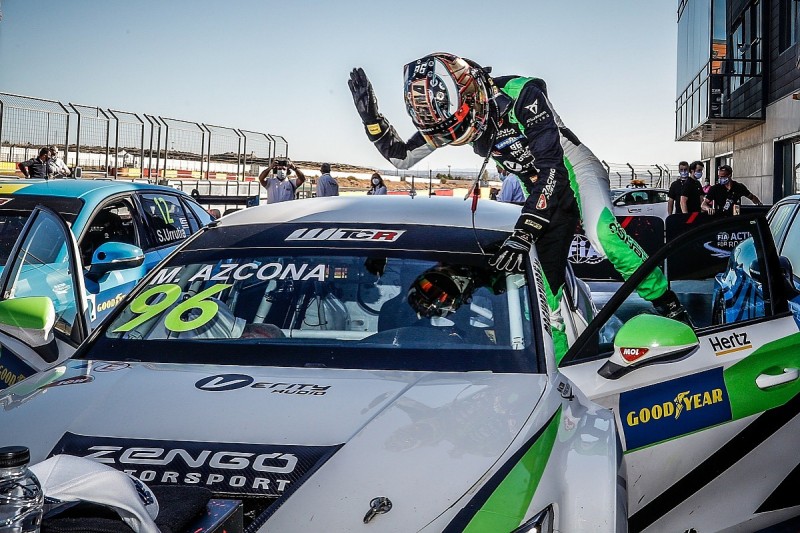 Urrutia closed up on Bjork and looked faster than the Swede, but chose to play the team game. "I wanted to win, that's why I pushed so hard," said Urrutia, "but Thed was good too and deserved it, so I just sat behind him at the end."

Former WTCR champion Gabriele Tarquini put in a storming drive to finish third, having passed Vernay, Nathanael Berthon's Audi and Magnus to claim the final step of the podium.

But it was a tougher day for Cyan Racing's Ehrlacher. The championship leader failed to make it through the Q1 qualifying session on Saturday, ensuring lowly grid slots for all three races.

He salvaged points in 11th place in race one and seventh in race two, then struggled to 12th in the final race with a turbo boost issue.

His consolation was that Munnich Motorsport's Guerreri, who started the weekend 22 points down on Ehrlacher, also failed to shine.

The Hondas were carrying maximum success ballast following Guerrieri's two victories at the Slovakia Ring and proved uncompetitive all weekend in Spain.

Like Ehrlacher, Guerrieri failed to make it out of Q1 on Saturday and dropped into salvage mode to gain what points he could. He was only 13th in race one, but managed 10th in the final two races to limit Ehrlacher's gains.

"All we could do was take few risks in the first laps and gain positions," said the Argentinian.

"We started the weekend 22 points behind and now the gap is 26, so I've only lost four points. It wasn't too negative."

The season finale, on 14-15 November, had been planned for the Adria circuit in Italy.

But track revisions have fallen behind schedule in the wake of the pandemic, so the teams will now return to Motorland Aragon for the final three races.