Tassi was quickest in every segment of qualifying and elected to go last in the top five shoot-out.

His time of 1m59.808s put him a fraction over a tenth of a second quicker than team-mate, and home favourite Monteiro, while the Cyan Racing Lynk & Co of Yann Ehrlacher was third.

Race one winner Norbert Michelisz had a disaster of a session and failed to make it into Q2, eventually ending up 16th on the grid for both of today's races.

Championship leader Esteban Guerrier and his Munnich Motorsport team-mate Nestor Girolami had held the top spots in their Honda Civic Type Rs but were quickly usurped in the closing minutes by Tassi, Monteiro and the Team Mulsanne Alfa Romeo of Kevin Ceccon.

With only the top 12 proceeding to Q2, Michelisz and BRC Racing Squadra Corse team-mate Gabriele Tarquini were at risk, with Mikel Azcona's late effort bumping Michelisz out of qualifying.

Thed Bjork was another to fall at the first hurdle in his Cyan Racing Lynk & Co, only managing 15th.

Q2 was red flagged early on as Ceccon crashed his Alfa at the fast Turn 4 corner, which had caught out Augusto Farfus in practice.

Ceccon went nose first into the barriers, taking the right rear wheel off and inducing heavy damage to both right-hand side corners of the car.

His lap-time was subsequently deleted as a result of bringing out the red flags. 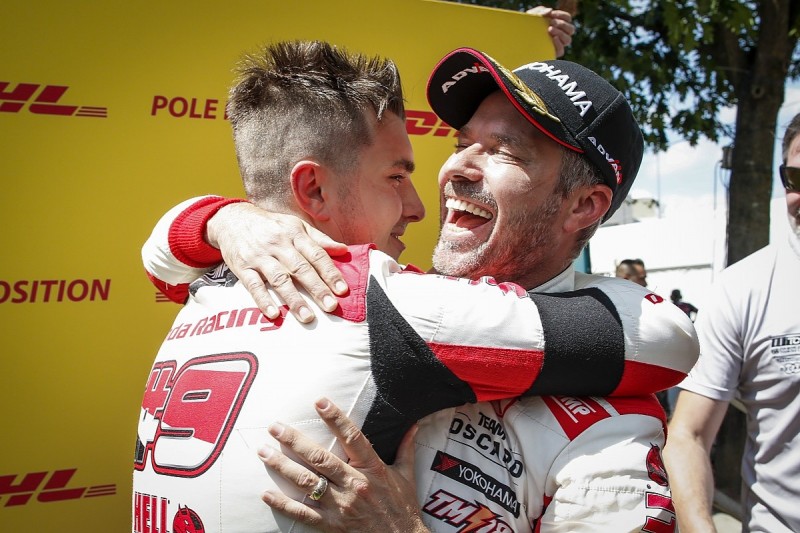 Once action resumed, it was Tassi and Monteiro who again set the pace, with Guerrieri and Girolami seemingly electing to concentrate on securing the best possible starting position for the reversed grid race two.

Girolami was ultimately the sacrificial lamb as he ended up only 11th, while Guerrieri was ninth fastest and therefore will line up second behind polesitter Ma Qing Hua's Alfa Romeo.

Azcona was eighth fastest behind the Hyundai i30 N TCR of Nicky Catsburg and the Audi RS3 LMS of Jean-Karl Vernay, meaning they will line up third, fourth and fifth respectively in race two.

Sebastien Loeb Racing's Rob Huff was the first to go out for the Q3 shoot-out, with the Brit setting a benchmark time of 2m00.424 in his Volkswagen Golf GTI.

This was easily beaten by Ehrlacher's Lynk & Co, with the Frenchman securing third with his time of 2m00.122, some three-tenths quicker.

Monteiro then went quickest, and was the only driver to not be beaten by the subsequent runner in the session as Yvan Muller wound up 0.337 in arrears.

But Tassi was in another world on his run and brushed the barriers en route to his first ever series pole.

The teenager, who turns 20 next week was fastest in every sector and ended up 0.141 seconds ahead of Monteiro, also claiming the five points on offer for pole position.