Michelisz's second victory of the season and a non-score for Guerrieri means that just 15 points now separate the pair, with Guerrieri having arrived in Portugal with a 45-point margin.

From pole, Michelisz got off the line well to lead comfortably into the first corner from BRC Racing Squadra Corse Hyundai team-mate Augusto Farfus and Cyan Racing's Yann Ehrlacher.

Farfus's defensive efforts allowed Michelisz to open up a four-second advantage, with the latter easily rejoining from the mandatory joker lap in the lead.

The tight confines of the 4.79-kilometre (2.98-mile) street circuit did not produce any repeats of last year's crashes as the field managed to get through the first laps unscathed.

Tarquini pitted soon after and retired, while Monteiro finished a lowly 23rd and just one place ahead of Guerrieri who suffered a nightmare race. 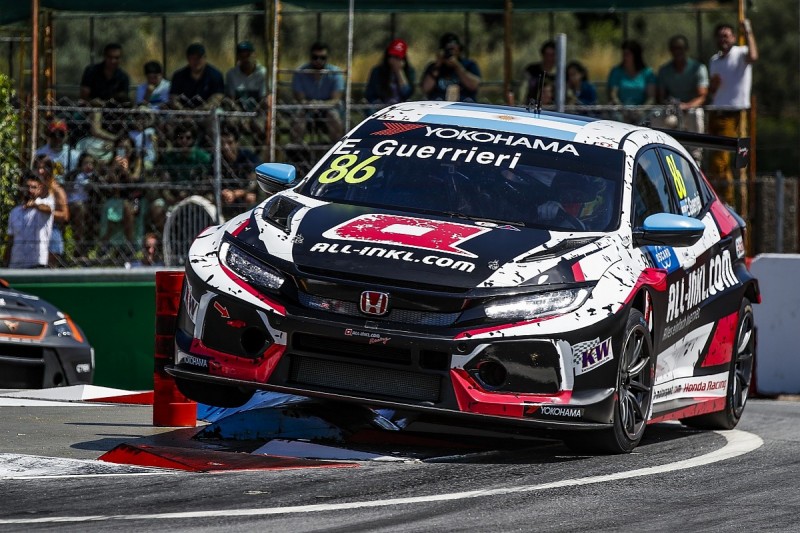 Guerrieri qualified 19th after struggling to find a clear track and made little progress up the field in the early laps.

He was running in the points in 13th before slowing round the back of the circuit, losing several places in the process.

The Honda driver made it to the finish but was left to rue a significantly reduced points lead.

Behind winner Michelisz, Ehrlacher leapfrogged Farfus after taking his joker a lap after the Hyundai driver to claim second.

Farfus just hung onto the final step of the podium from the Sebastien Loeb Racing Volkswagen Golf GTI of Rob Huff.

Huff's VW proved faster in the late stages of the race, meaning he finished ahead of the third BRC Hyundai of Nicky Catsburg and the Comtoyou Cupra of Aurelien Panis.

The Alfa Romeo driver was swallowed up as the lights went out, but showed plenty of pace at the end to claim two points.