Tanak led a clean sweep of the podium for the Japanese marque, with Kris Meeke coming home 20.8s in arrears, with Jari-Matti Latvala third.

Neuville salvaged finished behind Hyundai team-mate Dani Sordo in fifth on the Powerstage - which he won - after falling out of victory contention after changing a wheel at the end of Saturday's running.

He now moves ahead of six-time WRC champion Sebastien Ogier - who also had to change a wheel following a puncture - in the standings, 13 points clear of the Frenchman.

Autosport understands Sordo will check in late to hand Neuville fourth place, gifting the Belgian a further two points in his pursuit of Tanak.

Neuville had set the quickest time on the opening pass of Stein und Wein to briefly hold the lead and stayed in contention by the end of the second loop, reducing the deficit to just 2.8s overnight.

The gap then came down to 1.5s after Saturday's first stage at Freisen, but a mistake and subsequent stall for Neuville on the following stage Romerstrasse allowed Tanak to open up a five-second advantage.

Things then got worse for Neuville on the 6.6-mile Panzerplatte test, with the Hyundai driver dropping 1m26s - and five places to seventh - after having to stop and change a puncture following a puncture.

From then on, it was a case of damage limitation for Neuville, who claimed two stage wins on Sunday and benefited from team-mate Dani Sordo gifting him fourth after the Powerstage.

Sordo had been running fourth and ahead of Meeke by the end of Friday's stages, but dropped to ninth after encountering gearbox issues on the day's final test at Wadern-Weiskirchen. 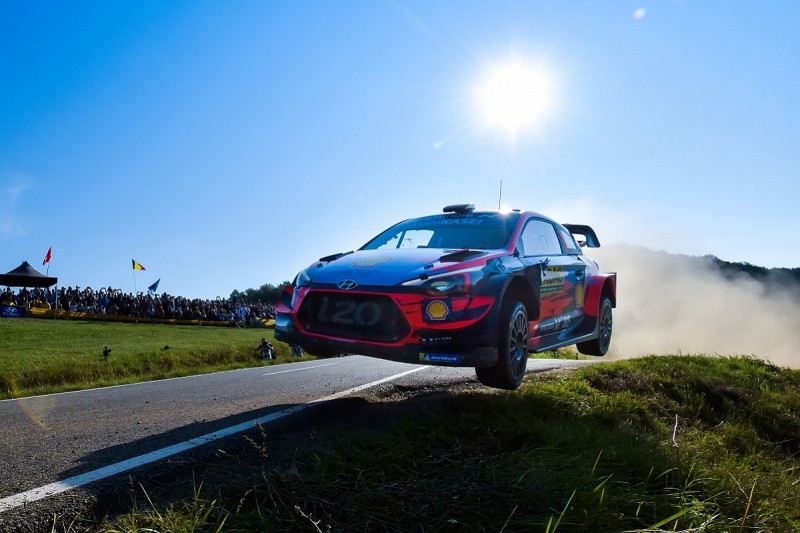 Esapekka Lappi finished as the best Citroen driver in sixth, but dropped to eighth as he handed team-mate Ogier seventh after the powerstage to give the championship contender more points, as Sordo had done for Neuville.

Lappi finished just four seconds ahead of Hyundai's Andreas Mikkelsen following a lively battle between the pair of Sunday morning, but Mikkelsen inherited sixth thanks to Lappi gifting Ogier a position.

Mikkelsen began the day almost six seconds in front but Lappi moved ahead following the opening passage of Grafschaft, with the positions swapping on the following two stages.

Lappi then beat Mikkelsen by nearly 1.6s to secure sixth on the Powerstage.

Ogier's struggles began on Friday morning as understeer hampered his progress in the C3 compared to Neuville and Tanak ahead of him.

He started Saturday morning a full 30 seconds adrift of the leaders and plummeted down the order when he and co-driver Julien Ingrassia were forced to change a wheel following a puncture on the final Panzerplatte stage.

Bemoaning a car he "cannot drive" on Sunday morning, a dejected Ogier finished 1m56.3 seconds behind winner Tanak, and is now 42 points adrift in the championship.

Gus Greensmith was the highest-placed M-Sport car in ninth in what was a tricky event for the Cumbrian team.

De facto team leader Teemu Suninen's rally barely got going before a fly-by-wire issue stopped the Finn's Ford Fiesta WRC at the beginning of Friday's opening stage, forcing him into retirement for the day. However he returned strong on Saturday and Sunday, scoring four points on the power stage.

Greensmith also slid wide and hit a tree on SS8, breaking the right-front steering arm in the process. The inexperienced WRC2 regular then survived a power steering scare late on Saturday, but brought the car home comfortably ahead of Toyota newcomer Takamoto Katsuta who finished 10th.

The first occurred on SS8 when the Finn nosed his car off the road and got stuck on a tree on the outside of a left-hander, requiring spectator assistance. He then compounded the error by going off again into a ditch on SS9.