Tanak maintained his overnight lead of 25.1 seconds over team-mate Kris Meeke after taking it easy on the passes through Grafschaft and Dhrontal on Sunday morning.

The third Toyota of Jari-Matti Latvala is a further 15.6s behind Meeke but is now just under 10 seconds ahead of the leading Hyundai of Dani Sordo, despite winning the first pass at Dhrontal (SS17).

Sordo began the final day almost half a minute adrift of Latvala but put in a storming run on the opening stage of the morning to reduce the deficit to just 16.1s.

Latvala later shipped another eight seconds on SS18, although Sordo is expected to hand his current fourth place to title contending team-mate Thierry Neuville on the Powerstage.

Having been ruled out of the fight for victory after stopping to change a punctured tyre on Saturday, Neuville set about limiting the damage in his Hyundai i20.

Neuville won both SS16 and SS18 to edge further away from Hyundai stablemate Andreas Mikkelsen, who found himself embroiled in an ebb and flow battle with the Citroen of Esapekka Lappi for sixth.

The pair were split by 5.8s in the Mikkelsen's favour coming into the morning's opening stage, but Lappi moved ahead after Mikkelsen suffered a minor off-road excursion.

Mikkelsen then turned a 4.8s deficit into a 1.0s advantage after Dhrontal before extending it marginally to 1.8s lead ahead of the final stage.

Lappi is also expected to cede his seventh place to Citroen team-mate Sebastien Ogier, who also suffered a puncture in Saturday's running.

Ogier complained that he "cannot drive this car" following a difficult SS17, despite finishing the stage fourth quickest. The six-time WRC champion lies eighth, some two minutes behind Tanak. 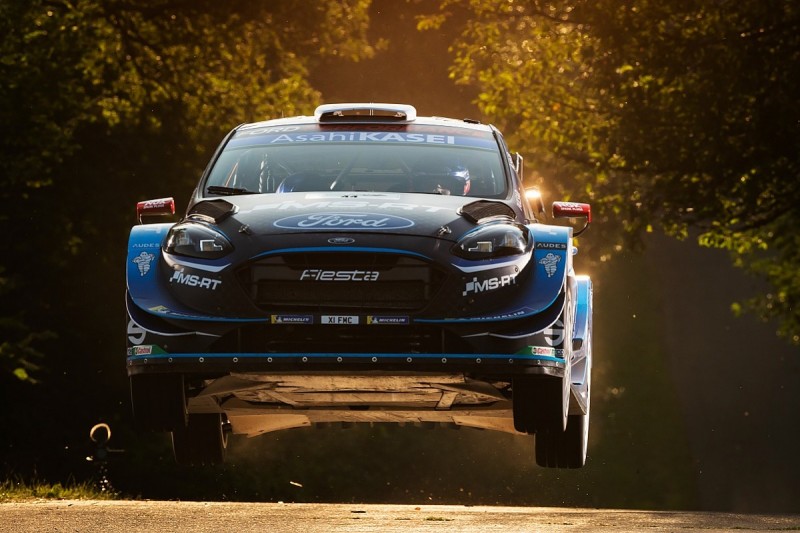 Gus Greensmith is the only M-Sport Ford Fiesta driver in the top 10 following team-mate Teemu Suninen's mechanical woes on Friday.

Rounding out the leading WRC runners is debutant Takamoto Katsuta, who recovered from a hairpin stall on SS16.