Second overnight, Bakkerud won his Q3 race to claim the quickest time, before surviving first corner contact with points leader Johan Kristoffersson in Q4 to win on track and place second to pace-setter Petter Solberg, who was over three seconds quicker than anyone else, leading his race from lights to flag.

The first corner contact with Kristoffersson almost made for a very different outcome for Bakkerud, who door-handled with the PSRX Volkswagen Sweden driver on the run to turn one, the pair started first and second on the grid.

Turning into the first corner, Bakkerud was sent sideways by a touch in the rear, allowing MJP Racing driver Kevin Eriksson an opportunity to get up the inside.

Bakkerud remained marginally ahead and held the inside line for turn two, but was rotated around the front of Kristoffersson and Eriksson, his Ford Focus heading in the opposite direction to that of the corner.

Bakkerud was able to get the car back under control and maintained the lead, while Kristoffersson, who had been fastest in Q3, suffered a left-rear puncture on the turn two kerbs. 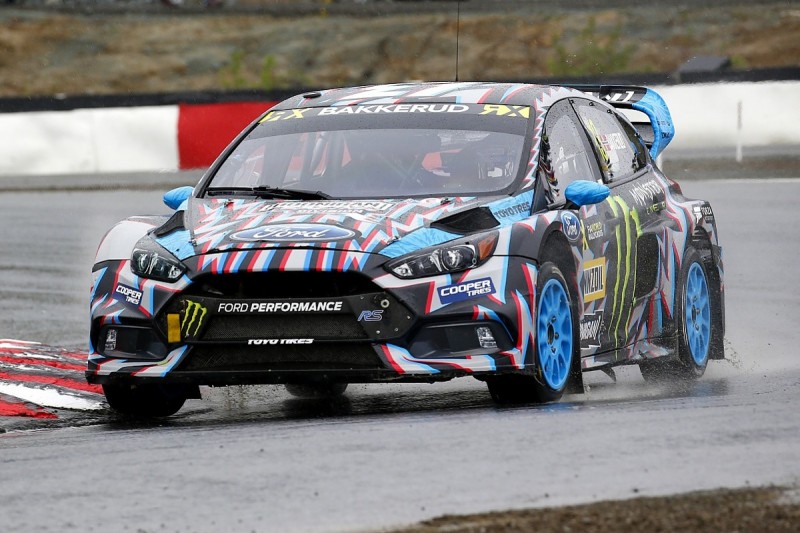 As the rest of the field passed the stricken Volkswagen Polo, Mattias Ekstrom, who had taken a lap one joker, lost time meaning that when Bakkerud took his joker on the final lap, he emerged with the lead to pip Ekstrom to top spot overall in the Intermediate standings.

Solberg's time elevated him to third, having dropped behind team mate Kristoffersson after Q3, despite a slow time in Q4 leaving him 21st, Kristoffersson maintained a top four position.

Solberg and Ekstrom had been involved in contact in Q3 at the circuit's hairpin, which claimed Timmy Hansen's Peugeot 208 after hitting the inside wall.

Hansen had been trying to make a move on the inside of Solberg at the exit of the corner, as Ekstrom ran wide, but the three touched in a concertina effect in a spilt second and Hansen was fired into the concrete wall, sending the car through a 360 degree spin and causing heavy damage.

Amazingly, the Team Peugeot-Hansen mechanics repaired the car in time for Q4, where running in clear air Hansen set seventh time and just scraped into the semi-finals in 12th, at the expense of Eriksson who just missed out.

Ken Block finished second to Solberg in their Q4 race to join team mate Bakkerud in the semi-finals, which will include all three EKS Audi S1s and a trio of Peugeot-Hansen Peugeot 208s, Reinis Nitiss and Toomas Heikkinen joining team leader Ekstrom and Kevin Hansen and Sebastien Loeb ahead of Timmy Hansen in the qualifying order.