For the first time in 2017, Ekstrom is top of the standings after qualifying two, after setting the best time in Q1 and finishing second to Andreas Bakkerud in Q2.

Ekstrom had initially set the pace in the event's second free practice session on Saturday morning, which took place in wet conditions at the hillside track.

The Swede led his Q1 race from lights to flag, taking the lead at turn one when Petter Solberg made contact with Guerlain Chicherit, sending the double champion's Volkswagen Polo sideways at the corner entry.

Solberg then set the fastest lap of the day until that point on the second tour, before taking his joker, but Ekstrom responded with a faster time before taking his own joker at the start of lap four to retain the lead.

The rain stopped before the start of Q2 and although the track dried throughout, times didn't improve as would be usually expected.

That meant Kevin Eriksson, who started in the first race of the second session due to a high-speed spin on the first lap of Q1, won his race and set a time that was not beaten until the fifth race.

In that final event, both Solberg and his team-mate Johan Kristoffersson made slow starts.

Ekstrom led into the first corner ahead of the Volkswagen pair as Bakkerud led Sebastien Loeb in taking the joker.

Solberg passed Kristoffersson at the end of the first tour before the Swede took his joker and dropped to the back of the field.

Solberg followed Ekstrom into the joker on lap four, with Bakkerud taking the lead and setting a time 2.3 seconds faster than Eriksson to stop the clock first, while Ekstrom and Solberg also ending up faster than the latter. 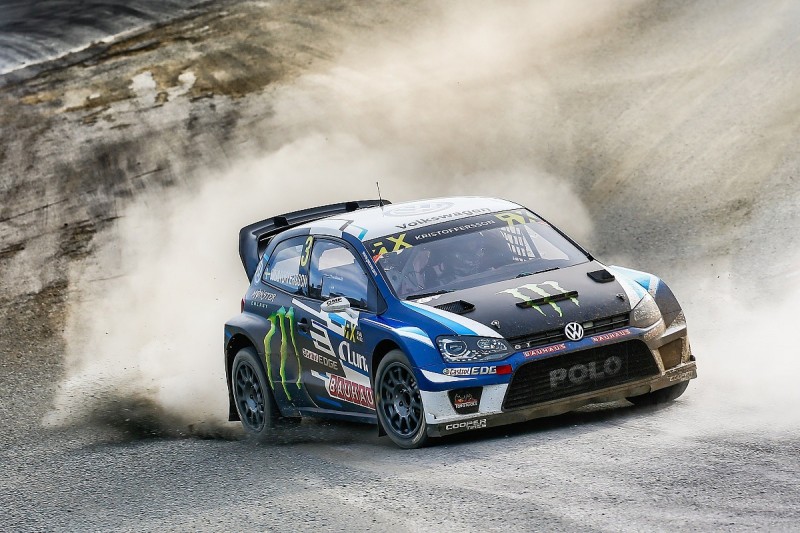 Championship leader Kristoffersson was quickest in Friday evening's practice session, but was involved in an incident where Loeb's car got pushed over the Swede's foot in the pre-grid area.

Although he did drive the car again in the session, Kristoffersson went to hospital to be checked over, but nothing was found to be broken.

Despite driving with pain in his foot, the PSRX Volkswagen Sweden driver is fourth at the end of day one.

Loeb's Peugeot 208 was fitted with a new engine for the event, but the Frenchman suffered a problem on his first run in practice on Saturday, which forced his team to change the unit.

Loeb got back out before the end of the 90-minute session to set the fastest time and wound up fifth on day one, ahead of team-mate Timmy Hansen, who passed Timo Scheider while taking a lap one joker in Q2 and then overtook his younger brother, Kevin, who ended the day 11th overall.

Ken Block rounded out the top 10.