Kristoffersson's nearest challenger for the crown, double DTM champion Mattias Ekstrom, topped the order in qualifying at the Barcelona Formula 1 venue while, for the first time this year, Kristoffersson didn't set a single fastest qualifying time and wound up fifth in the Intermediate order.

However, from third on the grid in the first semi-final Kristoffersson passed Kevin Hansen for second spot, then leap-frogged Ekstrom with an earlier joker lap to secure a front-row start for the final.

In a weekend of resurgence for 2019 title contender Andreas Bakkerud, the Norwegian beat the series frontrunners in Q3 to set the fastest time, then won semi-final one to secure pole for the final.

At the start of the main event, Ekstrom made a poor start from row two and dropped back, while Kristoffersson, like Bakkerud using a pair of new front tyres, made the best launch from the front row and eased his Volkswagen Polo ahead of Bakkerud's Renault Megane.

But, as the pack slowed for the tight left-hand first corner, Kristoffersson and Bakkerud made contact, Bakkerud's car forced into the tyre barrier on the inside and into a spin.

The heavy contact rotated Bakkerud's car into the following melee and, facing the wrong way, he was collected hard in the side by a fast-starting Robin Larsson's Audi S1.

Both drivers retired on the spot, but climbed out of their stricken cars unharmed. 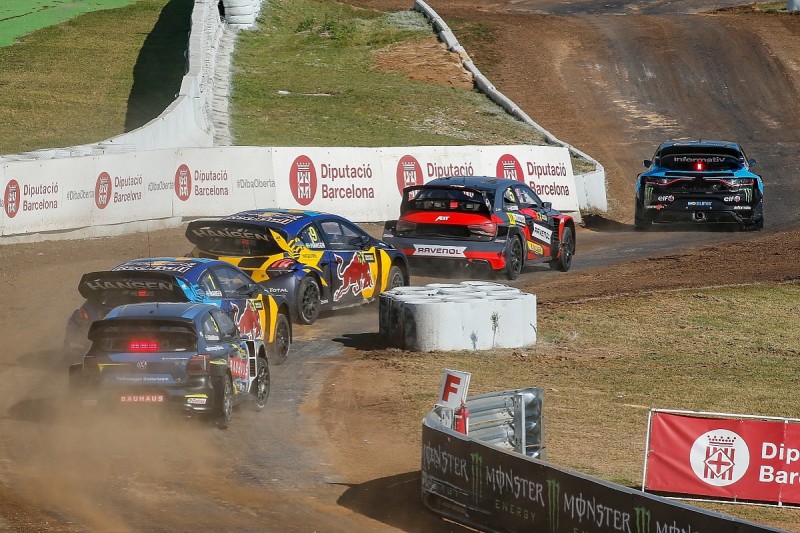 Ekstrom managed to avoid his KYB Team JC team-mate's stationary Audi at the opening corner and set off in pursuit of Kristoffersson, Timmy Hansen and Anton Marklund.

Ekstrom's former EKS team-mate Marklund took the joker at the first opportunity and dropped to fourth, while Kristoffersson took the compulsory extra route from the lead on the third tour, dropping behind Ekstrom.

Any thoughts Ekstrom may have had of slowing Kristoffersson behind and allowing Hansen to pull away out front, to help in his own bid in closing the gap on standings leader Kristoffersson, ended when Ekstrom slid sideways over the grass on the outside of the final corner on lap three, and lost track position to both Kristoffersson and Marklund.

Just as he had in round seven on Saturday, Hansen had saved four new tyres for the final in the second instalment of the Spanish double-header and, despite running in clear air out front for half the race, he didn't have the pace to fend off Kristoffersson.

When the reigning champion took the joker on the final tour, he dropped into second.

Marklund scored his first podium of the campaign in third, while Ekstrom recovered to complete the encounter, some 15 seconds behind Marklund, in fourth.

With two rounds of the series remaining, Kristoffersson leads Ekstrom by 27 points in the drivers' table, meaning the Swede could tie up his third World RX crown at the penultimate round at Spa next month.