RX Cartel Audi driver Bakkerud set the pace through the final two qualifying sessions on Sunday, and like Peugeot runner Hansen won his semi-final to start on the front row of the final.

With a pair of new tyres for the front axle of his S1, Bakkerud made the best launch and began closing the door on pole starter Hansen in the braking area into Turn 1, but without being a full car length ahead was forced wide into apex.

Hansen then bogged down on the inside of the corner and was given a further push in the rear by a fast-starting Timo Scheider from the third row.

Bakkerud took the lead into Turn 2 as Hansen recovered into second, and Anton Marklund ducked out of the traffic into the joker at the first opportunity.

Using the ultimate performance he displayed throughout the weekend, Marklund set the pace having used the joker to get into clean air in the opening laps.

But Hansen responded with a lap three joker to cover off the position and get his own clear road ahead.

He bettered Marklund's benchmark, setting the fastest lap of the day to close in on Bakkerud ahead.

With the gap decreasing, Bakkerud took his compulsory extra-route on the penultimate tour in a bid to retain his advantage, but carrying an issue with the handbrake that meant he couldn't use it to rotate the car he lost the lead, even with a close merge with Hansen over the finish line into the final lap.

Hansen remained at the front to the finish and claimed his second win of the campaign, moving into the points lead as a result. 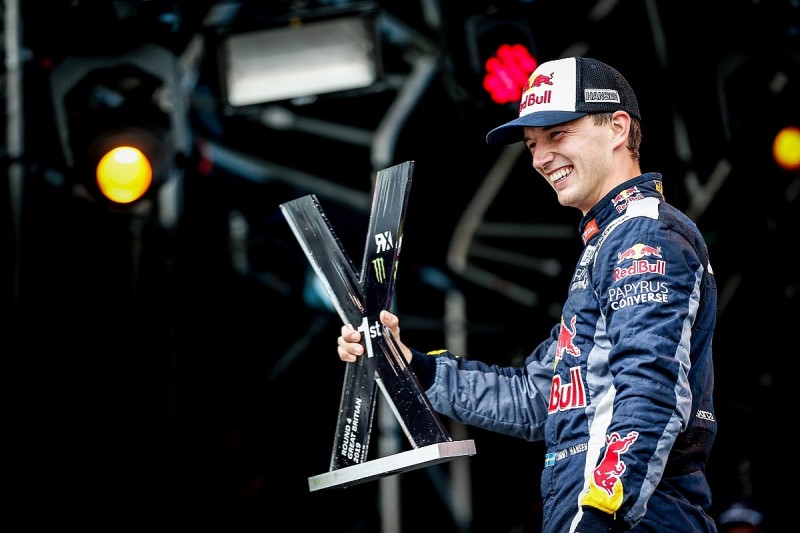 Bakkerud's second place maintained his record of finishing on the podium in every event he has finished this year, while Marklund made the podium for the GCK squad for the first time - his second World RX career rostrum finish.

Scheider wound up fourth, with Krisztian Szabo fifth and Liam Doran sixth, the British driver spinning on the final lap.

Kevin Hansen, the championship leader heading into the event, didn't make the final for the second round in a row.

He followed brother Timmy during semi-final one but spun in the joker lap on the last tour and finished sixth.

Standing in for the unwell Niclas Gronholm, GRX substitute and podium finisher from Spa Joni Wiman qualified on the front row for the semi-finals.

But he went out when he was squeezed into the tyre wall in the right-hander after the circuit's jump and his Hyundai i20 rolled onto its side.

Having missed both the Silverstone and Spa round two weeks earlier after splitting with the ES Motorsport team, reigning European Championship Super1600 champion Rokas Baciuska was announced in the paddock on Sunday afternoon as having signed a long-term deal with the GCK squad to drive a third Renault Megane.

He will race alongside Marklund and team owner Guerlain Chicherit in the Renaults starting from the next round in Norway in three weeks.