Lucas Luhr, Klaus Graf and Romain Dumas held a lap's advantage as the last-ever American Le Mans Series race neared the halfway mark, having inherited an early lead when Jani collided with an LMPC car in the first hour and lost time pitting for repairs, then serving a subsequent stop-go penalty.

But ignition issues dumped the Pickett car out of the lead and into retirement, handing the Rebellion Lola a comfortable cushion.

The Dyson Racing entry runs second in class, but is only seventh overall and nine laps down after a variety of problems for Chris McMurry, Chris Dyson and Tony Burgess.

Level 5 leads Extreme Speed in LMP2 after an entertaining dice between the former's trio of Guy Cosmo, Jonny Kane and Peter Dumbreck, and the latter's title-challenging #1 entry headed by championship protagonist Scott Sharp.

That dice looked to have swung the way of Extreme Speed when Sharp's team-mate David Brabham passed Peter Dumbreck just after the four-hour mark, but slick Level 5 pitwork meant they regained the initiative.

The second Level 5 car runs third, but is two laps down after minor dramas set its challenge back in the early stages and left Ryan Briscoe, Scott Tucker and Marino Franchitti playing catch-up. 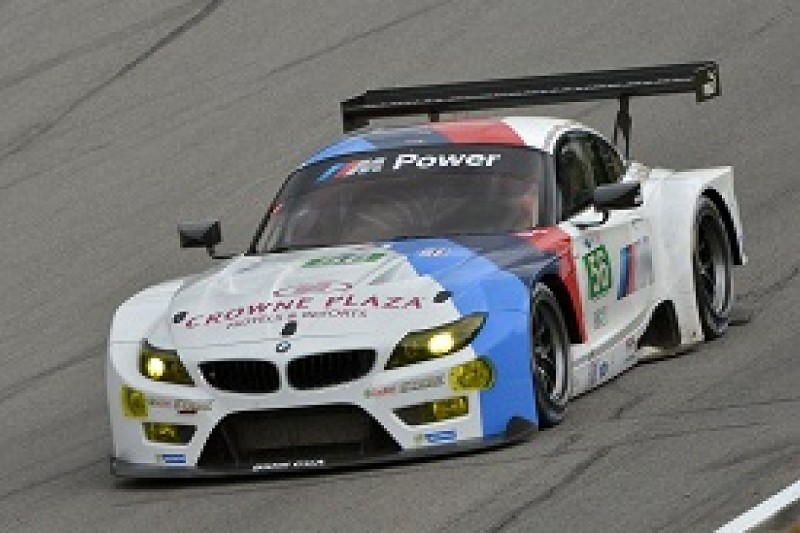 In GT, the #56 RLL BMW (pictured) leads the way by a slender margin over the Risi Ferrari. The latter had started from pole in the hands of Matteo Malucelli but had dropped back after a squabble with the #3 Corvette of Jan Magnussen had left it with slight damage to the right rear.

The early running had been made by Dominik Farnbacher in the SRT Viper and Oliver Gavin in the #4 Corvette, but the former's team-mate Ryan Dalziel clobbered a tyre wall shortly before mid-distance while myriad electrical problems hit the latter.