Having been in the hunt all day, the #9 Erebus Holden Commodore had to survive a number of late safety cars, a tricky switch to slick tyres and a fuel economy race to take an incredible victory.

The key was the penultimate restart of the day, on lap 145 of 161. Reynolds, sitting fourth in the queue behind Shane van Gisbergen, Garth Tander, and Nick Percat, watched the seas part for him even before the race had restarted.

With light rain falling in the pitlane, and the entire field having switched to slicks, leader van Gisbergen and Tander both ran wide at the last corner.

That gave Percat a surprise lead, with Reynolds hot on his heels in the tricky damp conditions. The pair staged a brief, but unforgiving, battle for the lead, Reynolds barging his way past and into the lead on the second lap after the restart.

He quickly extended his lead out to six seconds, before the likes of a recovering van Gisbergen started to make inroads.

But when van Gisbergen had a high-speed off at The Chase trying to pass Scott Pye for second place on lap 151, the #97 Red Bull Holden's day was done.

Another safety car, to recover Simona de Silvestro's crashed Nissan from the main straight, alleviated any fuel concerns for Reynolds but put Pye and Percat hot on his heels.

Reynolds wasn't going to be beaten, quickly building a gap after the lap 156 restart to secure a stunning win for the minnow Erebus squad.

"I've got nothing left to give, I am absolutely spent," said Reynolds. "Man it was just a perfect day, it's so good."

"It's taken a long time, but to do it with Dave, to do it with this team, unbelievable feeling," added Youlden, who won at his 18th Bathurst attempt. 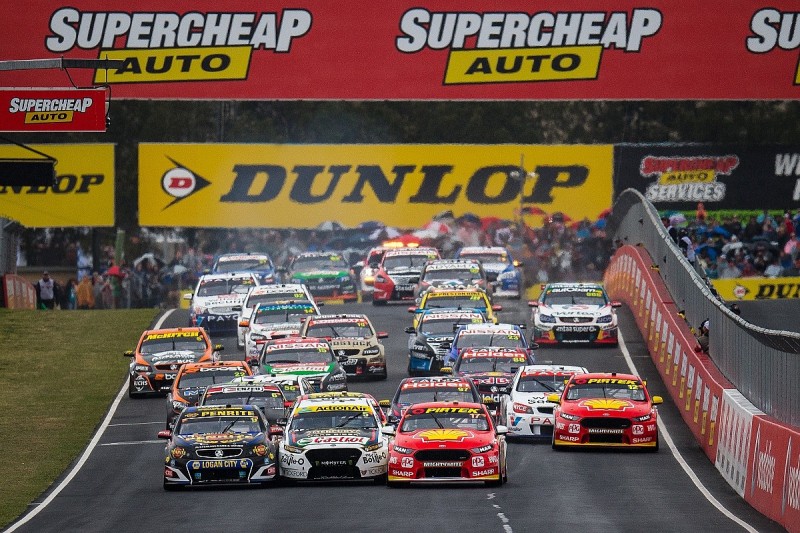 Scott Pye and Warren Luff came home second, the #02 HSV Commodore making up ground through the safety cars late in the race.

Having started way back in 20th, it was actually Luff's blinding first stint against the main drivers that put the car into contention, before a safe passage through the carnage secured a well-earned podium finish.

Fabian Coulthard and Tony D'Alberto finished third, having emerged as a contender thanks to having stopped twice under the lap 134 safety car to take on extra fuel.

It meant Coulthard could run hard to the finish, and he might have done even better had it not been for the additional two cautions at the end.

Dale Wood and Chris Pither capped off a remarkable day for Erebus with fourth place, while van Gisbergen recovered to fifth.

It looked like he was only going to make it to sixth, only for Mark Winterbottom, running fifth, to slam into the wall on the penultimate lap.

That rounded off a terrible race for Prodrive Racing, with Cam Waters and Chaz Mostert both caught up in the lap 145 restart problems.

It was particularly costly for Mostert, who was well and truly in contention for victory, and could have at least made huge strides in his title bid. He and Steve Owen finished back in 10th.

What could have been a game-changer of a day for the title fight was somewhat neutralised by engine dramas for Jamie Whincup in the final third of the race.

With Scott McLaughlin and Alex Premat already out thanks to their lap 84 retirement with an engine problem, Whincup was set to take over as the championship leader.

But that fell apart on lap 121 when Whincup was forced into the garage with a powerplant issue of his own.

He made a brief reappearance after going five laps down, but was quickly back in the pits.

He did return late in the race so he'd be classified, coming home 24th and 37 laps off the lead.

There was still a change in the lead, with Coulthard now on top with 2431 points.

Whincup is 91 points behind in second, six points clear of former leader McLaughlin.