Coulthard: "I broke the policy" in DJR Penske Supercars clash

The pair clashed on the way into the long Turn 5 left-hander as they squabbled over second place, Coulthard getting into the back of McLaughlin before both Mustangs ended up off the road.

Coulthard rejoined at the back of the field on the exit of the corner, while McLaughlin took a controversial shortcut across to Turn 8, slotted straight back into third, and went on to win the race.

While there was some heated in-race reaction from Coulthard, who suggested driving standards advisor Craig Baird should look at McLaughlin's rejoin over the radio, he later accepted responsibility.

"We operate with tenths of seconds," he said. "You make a decision at that particular time and what it is, it is, and if you can hit rewind you would.

"You never want to hit your team-mate, it's as simple as that and I'll apologise, put my hand up, obviously I've been penalised for it.

"We know our policy is to not hit each other and unfortunately today I broke the policy."

McLaughlin said he expected some contact but did not think it would be enough to send him off the road.

"It was probably something I didn't quite expect in some ways," he said. "I was prepared in some ways to cop a little bit of a bump, but I thought it was my corner so I just sort of turned in.

"Once I got hit I was just gone. Once you've got that much momentum going on, it was full-on.

"It's a bad situation for the team, but we'll sort it out. We're grown men, there's no hard feelings by anyone."

McLaughlin was not penalised for missing Turns 6 and 7, and called the shortcut a "split-second decision" in the interest of safety. 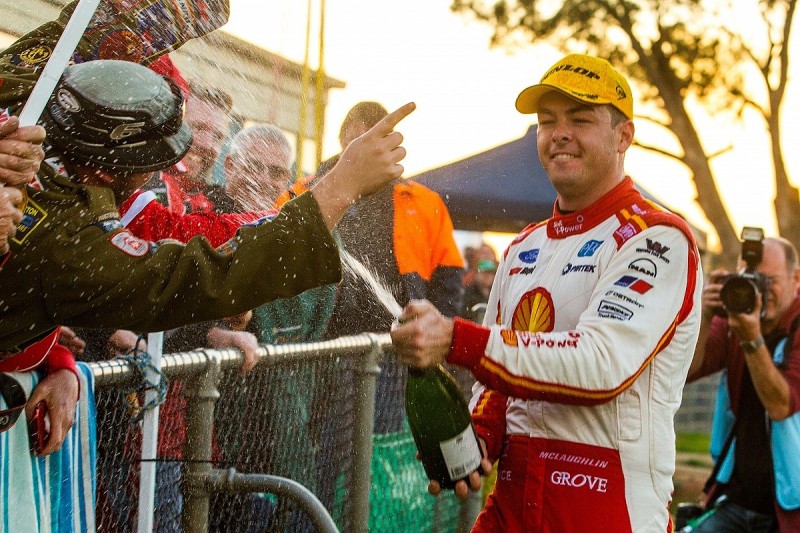 Asked if he felt it was fair to shortcut the circuit and still win the race, he replied: "It's a hard question.

"I felt like I had so much momentum going off and one thing for me - for next year, I don't know what they're going to do, and it's been there for ages - is the ditches. That was a big problem in this case.

"And then obviously wet grass, slick tyres, I was going off there at a rate of knots. By the time I had gathered it up, I half went left and next thing I know, [James] Courtney and a few others were turning the corner and I wasn't prepared to go the wrong way.

"So I just went straight through. For my own safety, for everyone else's safety.

"I basically said to myself, 'if I cop a penalty, whatever,' but it was just one of those things."

While he had accepted he may be penalised for the shortcut, McLaughlin said he did not actually expect the stewards to act given there is an understanding that drivers only have to rejoin before Turn 9.

"Whenever you go off like that and you rejoin it's always full on about it, there's always chatter and whatever. I just tried to clear my case over the radio and just explain."

He added his primary concern was damage to the car while bouncing through the infield.

"I was worried I was going to block up my brake ducts and stuff because I was locked up at points and I was trying to slow down," he said."

Team boss Ryan Story added that he did not anticipate any ongoing dramas between his drivers.

"It's already sorted, we had it sorted before the podium," he said during a post-race social media live broadcast.

"Our guys are good. They race hard together, today just didn't go the way it usually does, or certainly to any sort of plan we had pre-race, I can assure you of that.

"Unfortunately Fabs paid the price there. It's a bit unfair, 15s, I thought, was pretty tough for that. That's just the way the cookie crumbles sometimes.

"We're happy to come away with a win, we've still got first and second in the championship.

"When your bad days are as good as this one, you take them and you bank them."