The resistance Scott McLaughlin offered to fend off Shane van Gisbergen should have been the perfect way for the runaway Supercars leader to end his wait for a first Bathurst 1000 win. But doubt was almost immediately cast over his and co-driver Alexandre Premat's victory when DJR Team Penske was charged with a team orders breach.

McLaughlin was ultimately allowed to keep the win - though only after a hearing last weekend found Penske had contravened an 'obligation of fairness' rule from the FIA's sporting code. The violation earned the team a $250,000 suspended fine and cost it 300 Supercars' team points.

So how did the word 'debris' spark such a fierce furore at Mount Panorama? We attempt to answer that and other burning questions about the 2019 'Great Race' scandal.

Let's keep this brief - it's been covered enough.

At the very end of lap 134 of 161, Alex Rossi locked the rears of his Walkinshaw Holden and ended up beached in the sand at the last corner. As the safety car was called, the lead pack was approaching The Cutting. Jamie Whincup was first, Scott McLaughlin right on his bumper, and Fabian Coulthard just a couple of second back.

While one side of the DJR Team Penske garage told McLaughlin to push, the other instructed Coulthard to slow, under the mispronounced guise of "debris" on the circuit.

As Whincup and McLaughlin hammered back to the pits at full speed, Coulthard - with a weaving train of cars and frustrated drivers behind him - dropped more than 40 seconds back as he crawled over The Mountain and down Conrod Straight.

Why did it upset so many teams and drivers? 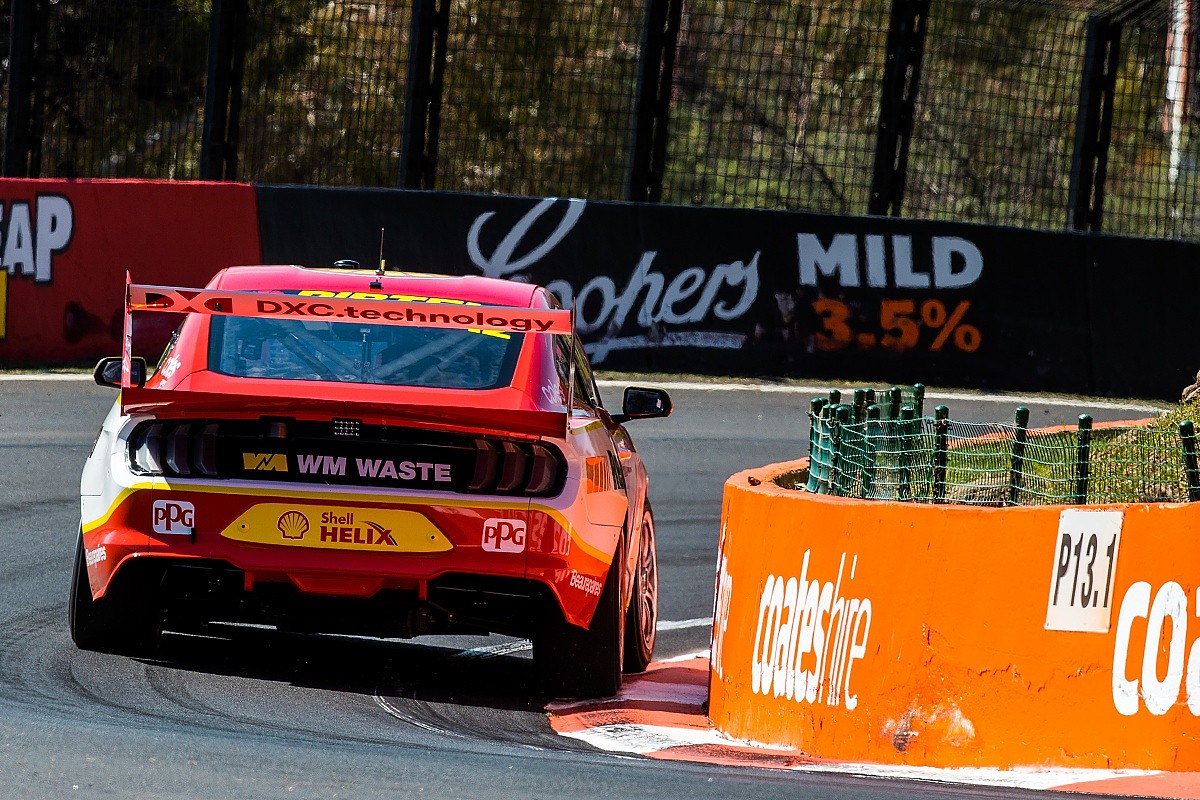 Given Coulthard would have been forced to wait behind McLaughlin in the pitlane under 'normal' circumstances, that this was a sneaky attempt to avoid double stacking was an easy assumption to make.

It's a common tactic, which may well explain why TV commentator Mark Skaife's first reaction was to use the term "gamesmanship" - which is relatively harmless.

But the reality is that this had nothing to do with double stacking, at least as far as the furious team bosses elsewhere in pitlane were concerned.

The issue can be traced back to the previous safety car caused by the lap 123-clash between Cam Waters and Chaz Mostert.

Lee Holdsworth had pitted right before that caution, while Shane van Gisbergen, Scott Pye, David Reynolds and James Courtney all stopped during it.

Whincup, McLaughlin and Coulthard, however, didn't make that additional stop - which meant they were facing a longer fill time. That put a number of those other cars right in the window to jump the leaders, while radio communication suggests that van Gisbergen would have probably stayed out.

Had it all played out to the number, Whincup and McLaughlin could feasibly have dropped outside the top five, rather that retaining the top two spots, which is what left a number of garages fuming over the go-slow order.

Did a strategic mistake put Whincup and McLaughlin at a potential disadvantage? 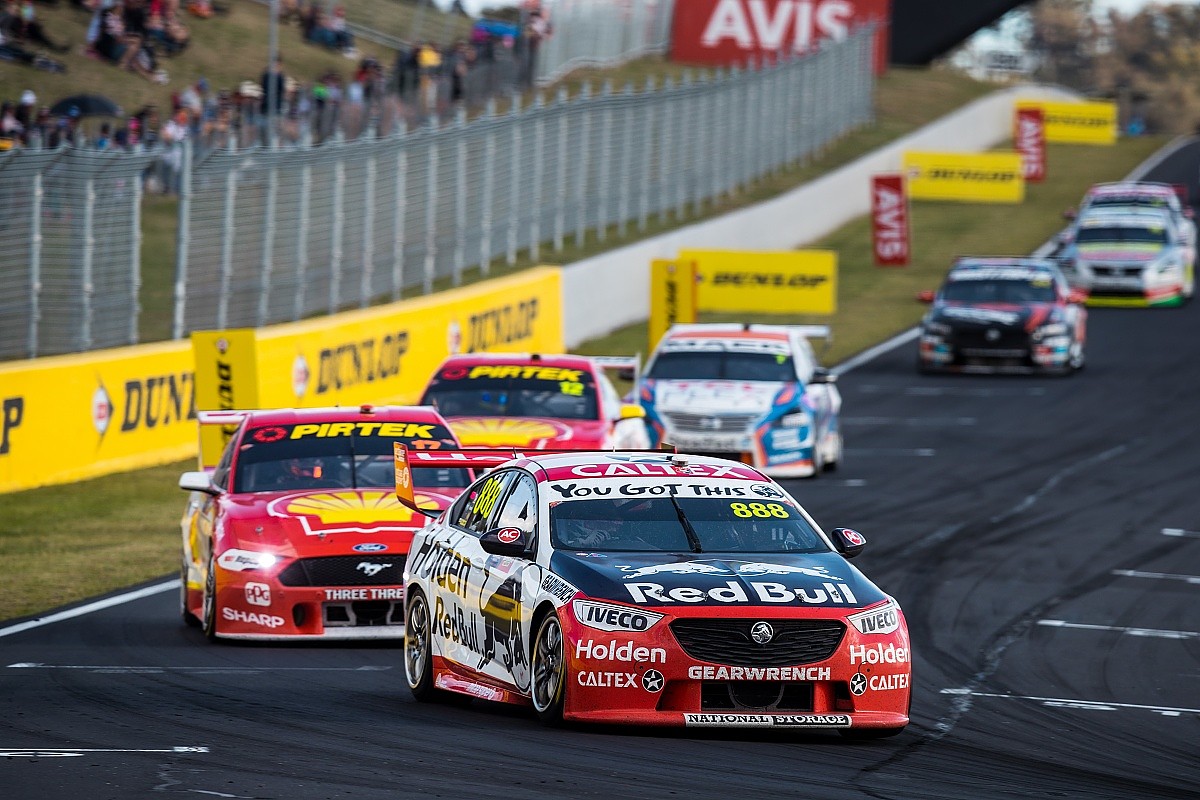 No, it was just a matter of timing. There's no way to skin the Bathurst 1000 cat without leaving yourself vulnerable at times, and that caution just happened to fall when those cars were vulnerable.

It's absolutely fair to say that, had McLaughlin been screwed by the timing of that safety car and dumped back in the pack, it would have been very unlucky - heartbreakingly so if it had ended up costing him the win.

There's little doubt that McLaughlin had a pace advantage all weekend - just look at his record-breaking qualifying shootout lap - while his and Premat's race pace was sublime as well. Exactly what you want to see from the race winners.

"If McLaughlin was back in the pack, could he have got through? You can't answer that" Garth Tander

But to suggest that pace alone would have seen him breeze past five or six cars, on track, ignores what was happening throughout Bathurst week.

From the word go, drivers were complaining about aero wash and what it would mean for passing. It wasn't just over the top of the hill either; Mostert's wild ride after popping out of Waters' wake at The Chase highlights the difficulty of following and then executing a pass. 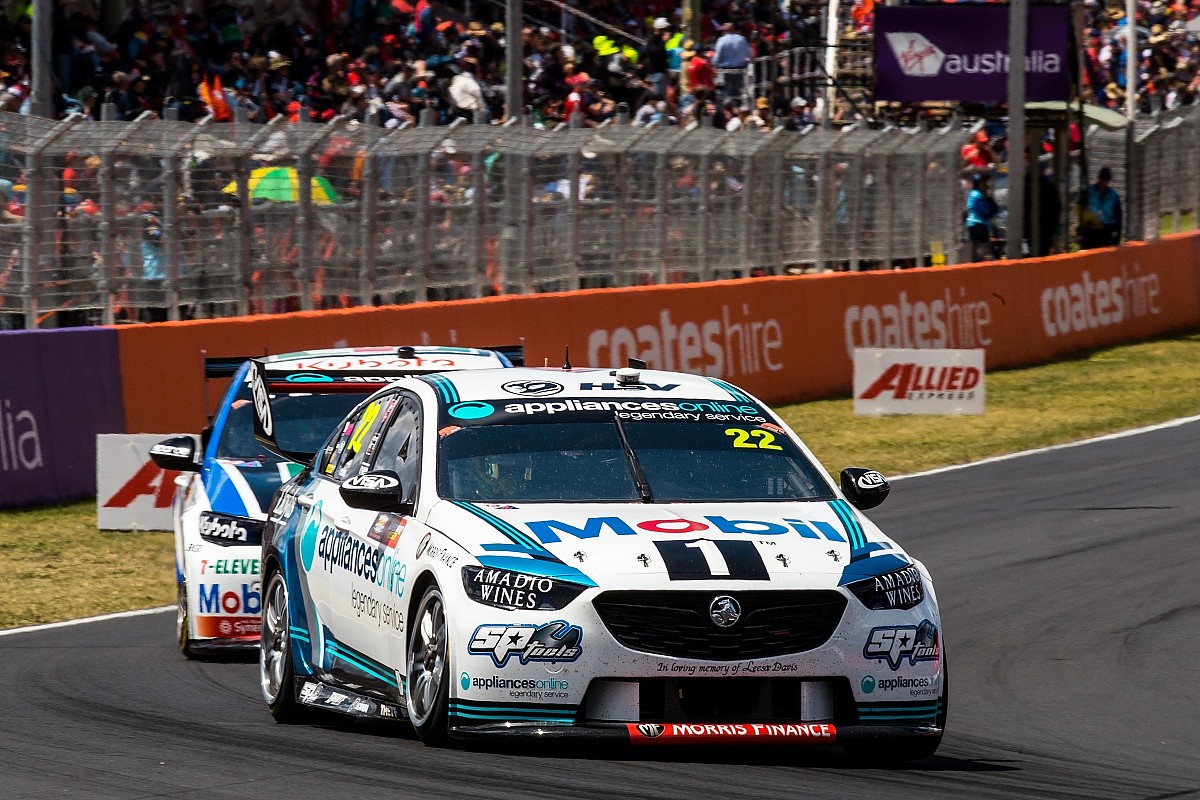 Garth Tander summed it up best on 'The Loud Pedal' podcast, highlighting how Whincup got bottled up behind Courtney (pictured above) at the end of the race - even after Courtney had generally struggled for pace, was carrying damage from tagging a wall, and was in serious fuel-saving mode.

"We saw that with Whincup," said Tander. "Everyone was saving fuel in that last phase of the race - he came in, put fuel in the car so he could run full fuel to the end... and he couldn't get past James Courtney to get back onto the podium.

"And I followed other cars that I was a second a lap faster than in the race and you couldn't pass them. So if [McLaughlin] was back in the pack, could he have got through? How do you answer that? You can't answer that.

"He clearly had a very fast car, but when he got back towards the pointy end, when he got stuck behind Reynolds, Courtney, van Gisbergen... they are hard heads that aren't going to open the door with 10 laps to go, regardless of who you are or what car you're driving."

None of this is to say that McLaughlin definitely wouldn't have won from fifth or sixth either. We're dabbling in some serious 'what if' territory here; maybe McLaughlin would have turned up the wick and just flat-out passed all those cars. Who knows what might have happened with safety cars?

But the argument that it was a fait accompli based purely on potential lap speed falls short.

What landed Penske in hot water? 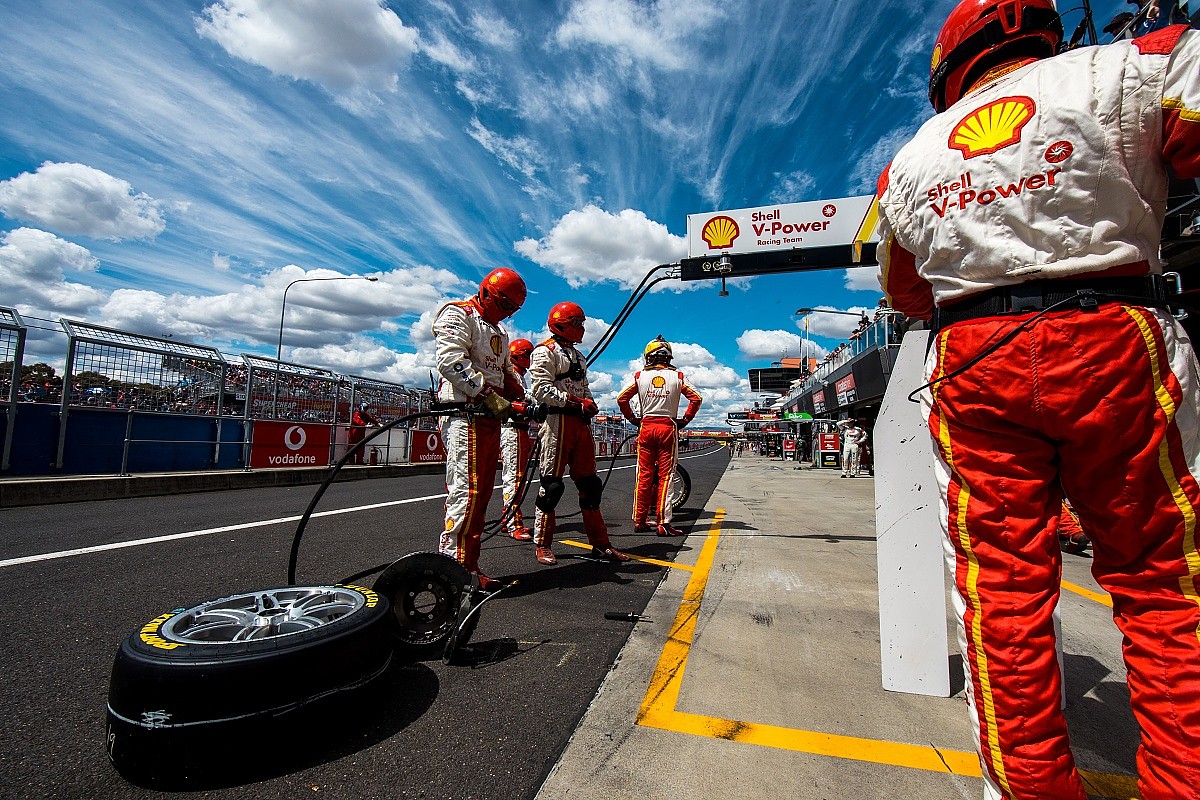 Trawling through the exhaustive post-hearing report, there's one phrase that stands out - 'speaking to a script'.

There was mixed messaging for the go-slow order from the outset. Penske boss Ryan Story initially explained it as a precaution for an overheating issue, while Coulthard's engineer enthusiastically warned of debris on the circuit - despite TV pictures showing the caution was for a relatively harmless off at the last corner.

Piquing the stewards' interest even further was the mispronunciation of the word debris.

"A peculiar feature of this matter is that in the team radio communication from car #12's engineer to the driver of car #12 [Coulthard], the engineer mispronounced "debris" as "debriss"," reads the report.

"The degree of emphasis and unwarranted repetition in the engineer's language, coupled with the mispronunciation of the word "debris", and the fact that the assertions made to the driver were a contrivance, has led us to conclude that the engineer was speaking to a "script"."

Penske countered that the exchange was an "innocent mistake" from the engineer, something that was rejected by stewards.

The report states: "We agreed with the deputy race director that the conduct of DJRTP demands a severe penalty, not just because it was intentionally engaged in to give the team an advantage but because it was done in a way that reflected a calculated attempt to conceal why it was being done."

Why wasn't McLaughlin stripped of the win? 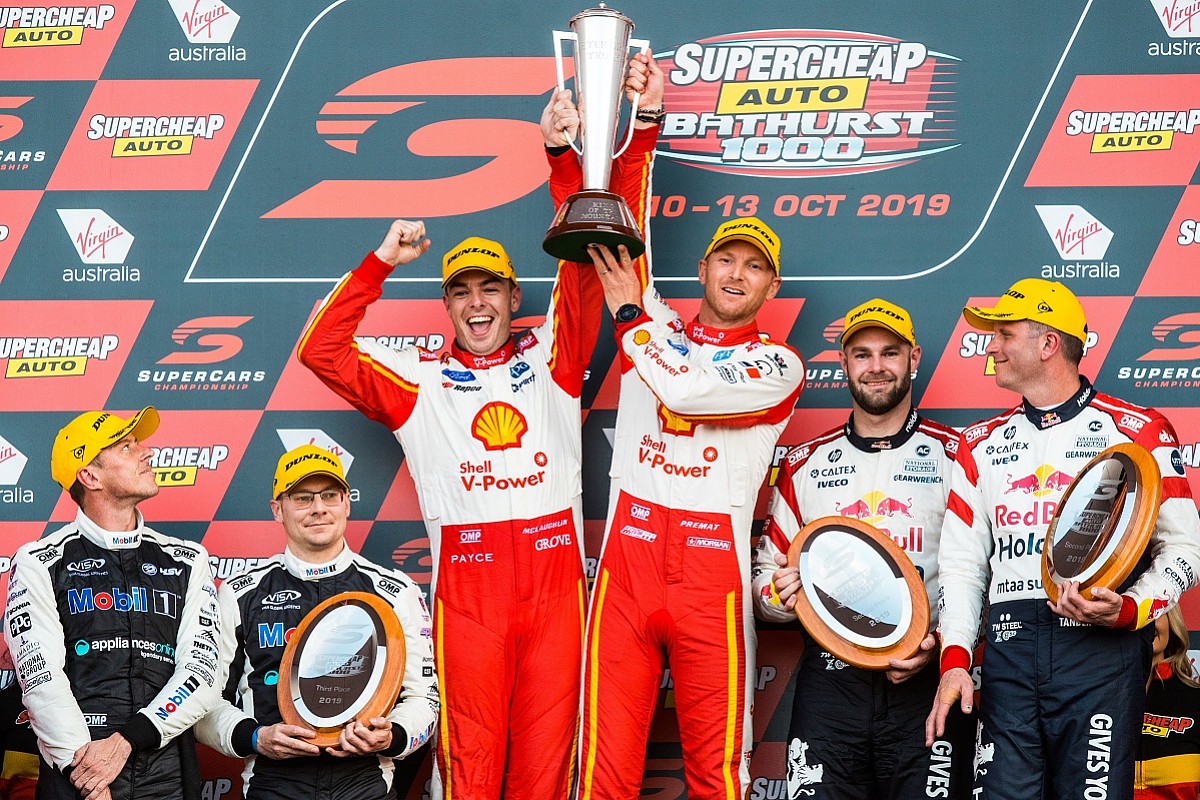 It's important to understand the context of the charges. Here is a passage from the findings that offers a window into the mindset of the sentencing:

"The authorised representative told us that because of the known overheating issues with car #12 there had been extensive discussion within the team as to how to deal with its next pitstop and the need to add water to the radiator.

"He explained that the sole concern for the team was that with a double stack car #12 would be sitting in pitlane for approximately 20 seconds and the engine temperature would rise to a potentially catastrophic level.

"He denied that there was any intention to advantage car #17.

"We are prepared to assume that there was no intention to advantage car #17, however, it defies belief that the engineer of car #12 just happened to have formed a mistaken belief that there was debris at some unknown location on the circuit and that just fortuitously resulted in the very problem anticipated with car #12 being resolved...

"We do not find that there was an attempt to influence the result of the race but it is difficult to avoid the conclusion that the result was affected to a degree, certainly for car #12 that would otherwise have rejoined the circuit after its pitstop in a much lower position."

From this you can deduce that the Penske successfully argued that there was no premeditated plan to use car #12 to benefit car #17. Had there been a clear-cut guilty charge on #12 being sacrificed to help #17 win the race, things may well look different right now.

But the report suggests that it was an attempt to advantage car #12 that has been prosecuted, and any advantage gained by the #17 was ultimately treated by stewards as incidental. 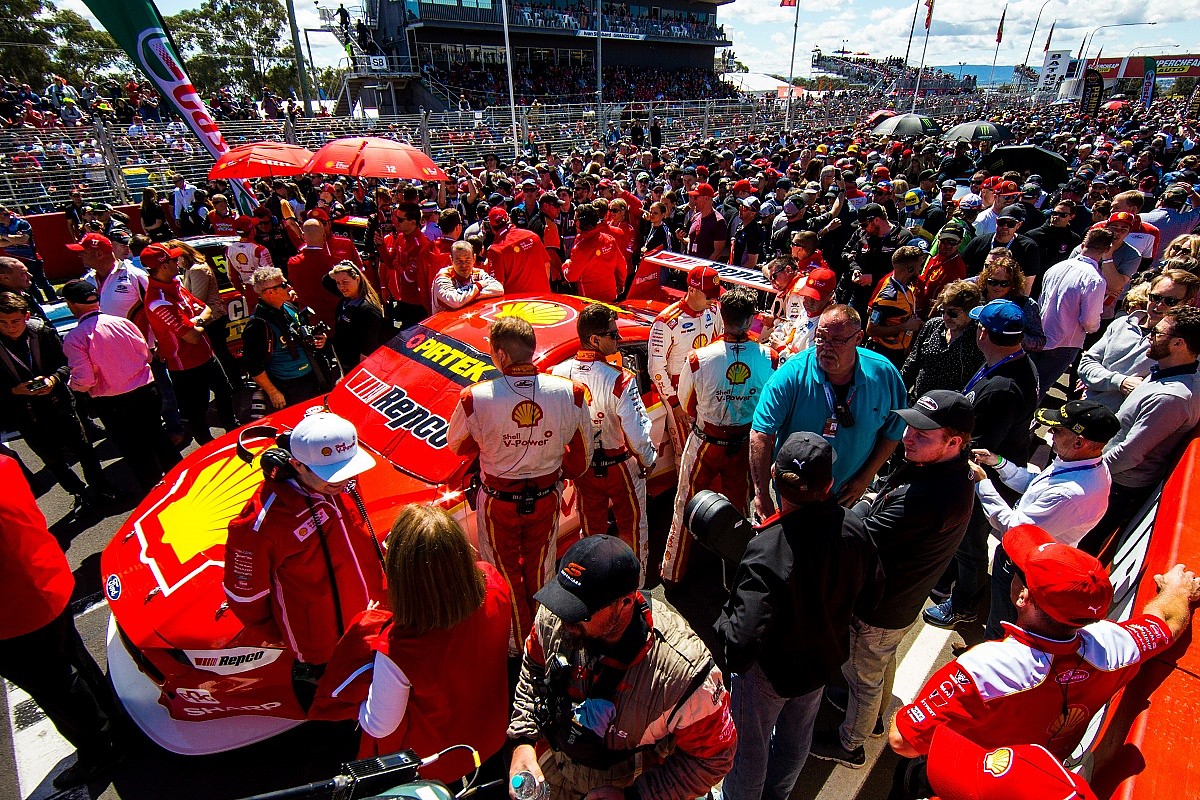