The beleaguered BK Racing NASCAR Cup series team could have its charter bought by Xfinity team GMS Racing, handing it a graduation into the top tier

NASCAR has run its equivalent of the American sporting franchise system with its charter since 2016, which guarantees a team the right to compete and fully-paid prize money in the Cup series in order to prevent the park and ride outfits that turned up only to collect payment for competing.

BK Racing, which was formerly the Red Bull NASCAR team, filed for bankruptcy on the eve of the 2018 season but has continued to compete in the series while its assets were listed on a North Carolina auction house.

The team previously sold one of its two charters to Front Row Motorsport to boost its finances.

A trustee, Matt Smith, was appointed to oversee the BK Racing bankruptcy case, and he criticised owner Ron Devine for his management of the team - declaring that cash flow was "exceptionally tight" ahead of its sale on August 20.

GMS Racing's team president Mike Beam confirmed to Autosport he was planning to bid for BK Racing's charter and select assets to assure a Cup series graduation, having previously made a bid of $1.8million ahead of its auction.

"The more and more I get into it, it's pretty complicated to be honest with you," Beam said of the process. "It seems like it is a good way to make attorneys money.

"I built that whole structure for GMS to go Cup racing, We were going to do it last year but Chevrolet was going through a model change [from the SS to the Camaro].

"We couldn't get support from Hendrick [Motorsports, which GMS Racing has an alliance with] because they knew their plate was going to be full.

"We talked with them about it and decided we would just wait another year."

Beam added that he believes rival bids are from current BK Racing team owner Devine and an effort from Front Row Motorsports, with all attempts needing to be approved by NASCAR. 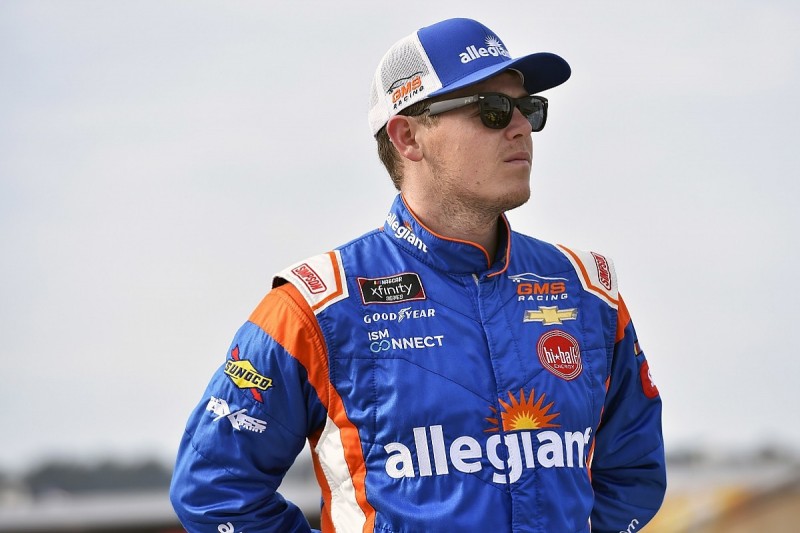 If Beam's GMS Racing deal is successful, he hopes to place Xfinity regular Spencer Gallagher (pictured above) in the #23 Toyota in the Cup series this year, just months after Gallagher was banned for violating NASCAR's drug policy.

"It's a process," Beam added. "We hope we can get it done and hopefully Spencer can race some this year and get some seat time.

The deadline to bid for BK Racing's assets closed on Monday, August 13, with the winning bid determined seven days later.

A NASCAR hearing to approve the sale would then take place a day after the winning bid is confirmed.

BK Racing has had a rotating door of drivers in 2018, continuing a theme from last season. JJ Yelley scored its best result, an 18th place finish at Daytona.