Harvick's machine will be joined by five other cars that were raced at Michigan for windtunnel testing this week, including the Penske-run Ford driven by Brad Keselowski.

The Joe Gibbs Racing cars of Kyle Busch and Denny Hamlin are the Toyotas to be tested in the windtunnel.

Harvick was informed not to celebrate with the customary burnout, which Dale Earnhardt Jr has previously suggested influences the legality of a car post-race, because the SHR machine had been selected to go to the windtunnel after the race.

NASCAR says the tests are being conducted for engine audits and to study data ahead of a potential rule change next year. 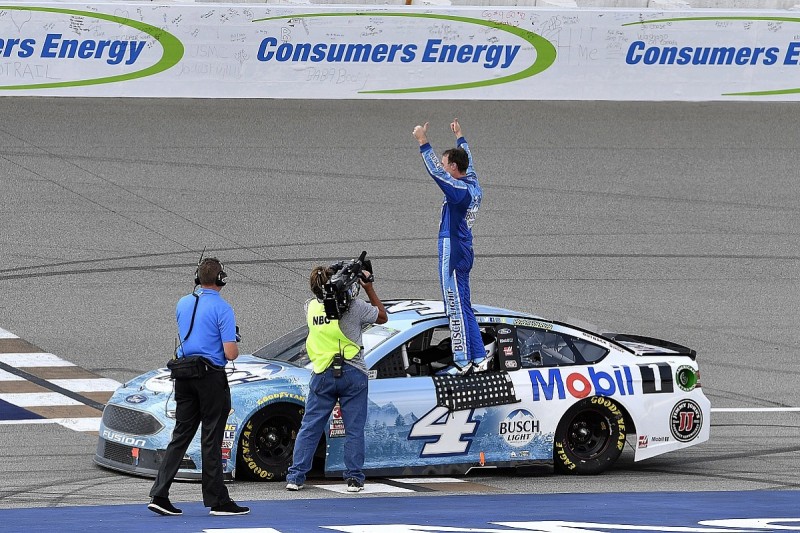 "We try to find a track where aerodynamics play a bigger role, so we took six cars - two from each OEM - and they'll be in the windtunnel," said NASCAR executive vice president and chief racing development officer Steve O'Donnell on SiriusXM Radio.

"Our process is to share [data] that with the OEMs and the race teams. "It's a good barometer for us for two things — to make sure we're still in that boxset for the current year and probably most importantly, we look to lock in 2019, that the baseline that we're using matches up with all the data that we have in the system.

NASCAR has previously inspected six cars in a windtunnel after the race at Texas Motor Speedway in April, with Elliott, Harvick and Busch previously handing their cars over for the test.

The other three were Jamie McMurray, Joey Logano and Erik Jones.