The Gibbs team has a technical partnership with Furniture Row, supplying it with a pitcrew to run Truex and team-mate Erik Jones's cars, but it had to be revised following a fight between the crews at Indianapolis's Brickyard 400.

Since then Jones has missed out on the playoffs, leaving Truex as the only Furniture Row car in contention, while Joe Gibbs has three of its four drivers in Hamlin, Kyle Busch, and Matt Kenseth still in the hunt.

Hamlin says that Furniture Row being able to focus on one driver is an advantage for Truex, who has already won two races in the post-season.

"There's something to be said about having a two-car team," said Hamlin.

"They can focus more on those specific cars, and especially just one car in the playoffs.

"I'm sure every resource and every overtime hour is worked on the #78 [Truex] car.

"Sometimes with a four-car team it gets spread out and it takes longer for updates to happen.

"They want to have it the same for everyone, and that takes time."

Truex won at Charlotte having started 17th on the grid with set-up problems, and Hamlin adds that Furniture Row's "phenomenal job" in preparing its cars using Gibbs's support makes a difference. 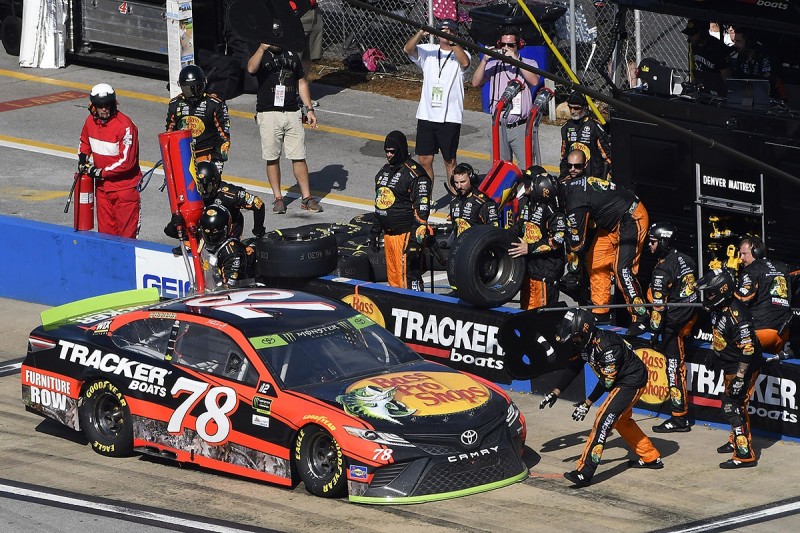 "Where I feel like the races we ran competitively with him, my balance has been superb, and then I hear in our debriefing that he hated his car.

"I think they've just got a little bit more speed in reserve, honestly.

"They build their own bodies and do their own thing out there. They just use our parts to put it all together. They do a phenomenal job."

Truex is the top playoff seed having taken 64 post-season points, winning 19 stages and leading 1,977 laps in total this year.

He is locked into the round of eight already, while Hamlin has two wins this season and is fifth in the series points and aiming to make it into the next stage of the post-season.

The playoff field will be cut from 12 to eight following next week's race at Kansas, with Truex and Hamlin yet to win their first NASCAR Cup title.

Furniture Row team founder Barney Visser said Truex's form has enabled him to sign bigger sponsor deals that will require less of the funding for next year to come from his own companies.

"You don't see me dancing in the aisles, but inside I am," Visser told Autosport.

"Martin has just delivered. We have to attribute [the sponsorship increase] to that.

"If we didn't have the performance, this wouldn't be happening."