Penske's Brad Keselowski says it felt like only eight cars completed NASCAR Cup's race at Talladega, with the race winner one of only four drivers in playoff contention to finish

The Ford driver won an attrition-filled race that had 11 cautions and three stoppages, with only 14 of 40 cars running to the flag.

Keselowski finished five places higher than the next classified playoff runner Denny Hamlin and said it was a "crazy" race.

"I feel like only eight cars finished the race," said Keselowski. "It was one of those crazy days.

"I think we've seen that at the plate tracks this year: a lot of attrition."

His win secured his passage into the next round of the playoffs.

"That takes some stress off of me for next week. I survived. What a special day. We were able to come here and get it done."

Keselowski's victory means he joins Truex in advancing to the round of eight.

Truex said his crash came from being aggressive as there was no pressure on him.

The points leader had moved to create space in a pack of cars and touched the rear of Harvick, collecting Kurt Busch and creating the pile-up that eliminated six playoff drivers and left 21 cars in the race.

"I tried to get into a hole that was closing up at the wrong time," said Truex.

"By the time I got on the brakes trying to get out of there, all hell broke loose.

"I was trying to get to the end and get some track position. Trying to get towards the front and I ended up causing a wreck, so I hate it for everybody.

"We definitively had nothing to lose today, but at the same time you don't want to be the person that causes others problems."

On-track attrition at Talladega claimed eight playoff drivers and has heavily impacted the standings ahead of the final race before the round of eight. 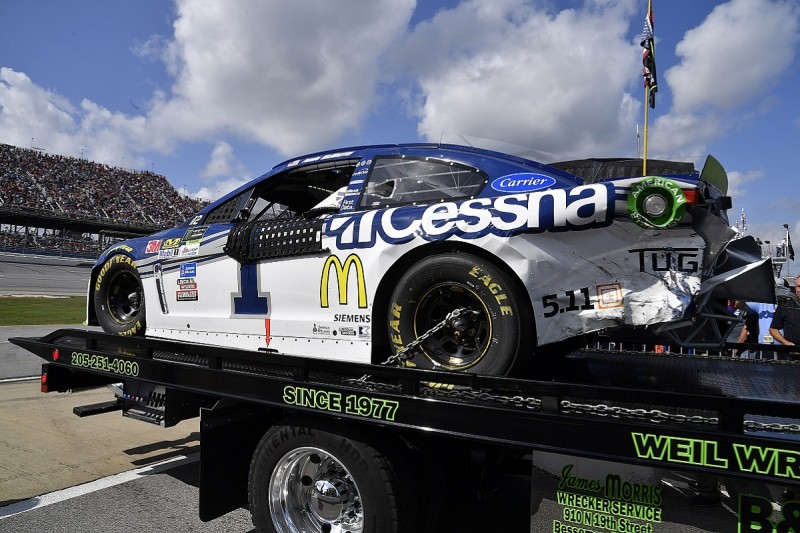 Jamie McMurray heads to Kansas needing to win to progress after falling to the bottom of the playoff cut following his self-inflicted crash with Erik Jones on lap 25.

Kyle Busch also fell down the order, with the Joe Gibbs Racing driver paying the price for two poor events after winning two of the first three playoff races.

Busch is one place above the cut-off, and will need to win or outscore Kenseth, Stenhouse, and McMurray to go through to the round of eight.