After Penske Ford driver Blaney collided with Johnson's Hendrick Chevrolet as they battled for a place in the top 10, Johnson confronted Blaney in the paddock.

He later gave a furious television interview in which he said he struggled to understand Blaney's defence because "his lips were quivering so bad he can't even speak", suggesting that he was "nervous, or scared, maybe both".

At this weekend's Michigan event, Johnson said he did not understand why his comments had been considered "a big deal" in the week between races.

"It was an observation, it was happening, I didn't hear a lot of details that I expected to hear," said Johnson.

"I could have gone into a much more intense line of thought and said a lot more that would have been a lot more damaging to him than saying his lip was quivering.

"I don't understand the sensitivity to that or why it's such a big deal.

"His lip was quivering and he didn't have a lot to say. It's one of the facts that took place in the conversation."

Johnson still feels Blaney was completely in the wrong for their clash.

"I was pissed off, I was crashed, I got drove through. Plain and simple," he said.

"I don't care how it looks or how it's perceived. I got dumped and I was upset.

"The way I was raised and the way I went racing was when something like that happens you go talk to the guy.

"I was taught not to use my car as a weapon, go out and try to crash a guy back.

"Fighting is really not my thing either unless I have to defend myself, so I went there and talked to the guy and hoped to hear a different side of the story than what I thought took place in the car.

"So that's the way I was raised in racing and the way I handled it."

With four races to go in the 'regular season', Johnson holds the last place in the title shootout as he sits 16th in the drivers' points.

He has not won a championship round since June 2017. 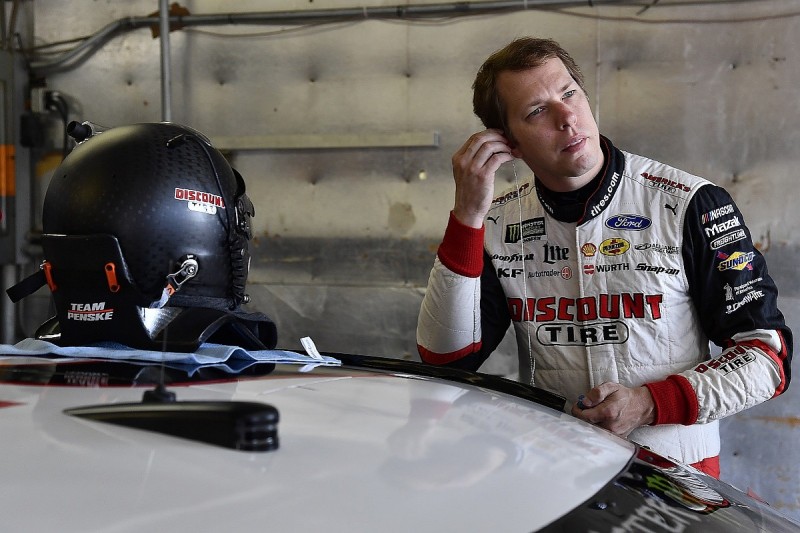 Blaney and Johnson qualified seventh and 10th at Michigan on Friday, as Brad Keselowski put Penske on pole ahead of Kevin Harvick.

Both Richard Childress Racing Chevrolets had their times disallowed.

Friday practice pacesetter Austin Dillon had originally been seventh on the grid and tema-mate Daniel Hemric 11th but they will now start in the last two spots in the 38-car field on Sunday.

NASCAR said both cars lacked fully functioning alternators and both teams have been assessed an L1 penalty. The parts were confiscated by NASCAR.

Both drivers will get a 10-point driver and owner penalty and their teams were fined $25,000.