Harvick was running in second behind Penske's Brad Keselowski in the opening stages, before he picked up a right-front puncture on his SHR Ford as he rounded Turn 3.

Diving into the pitlane for an early opening stop, Harvick eventually finished the stage in sixth having not dropped off of the lead lap, albeit now offset on strategy and largely anonymous through stage two as a result.

But Harvick returned to the front of the field in the final 50 laps, running in fifth place after the final restart in the final quarter of the 200 lap race.

Harvick managed to dive to the inside of Joey Logano at Turn 1 to seize the lead with 17 laps remaining and, critically, was comfortable with fuel mileage while his rivals immediately behind had to fuel save.

With the field having made their final scheduled pitstops with 50 laps to go, several drivers were short on fuel in the closing stages.

Logano, who won June's Michigan race, led for 52 laps in the final stage but was forced to pit with 4 laps to go - subsequently dropping out of second place to finish 17th.

His Penske team-mates also faced late race pitstops after having locked out the top three positions at the final restart.

Ryan Blaney was forced to pit from third on the penultimate lap, while Brad Keselowski was significantly under-filled at his final pitstop and returned to the pitlane with 12 laps remaining. 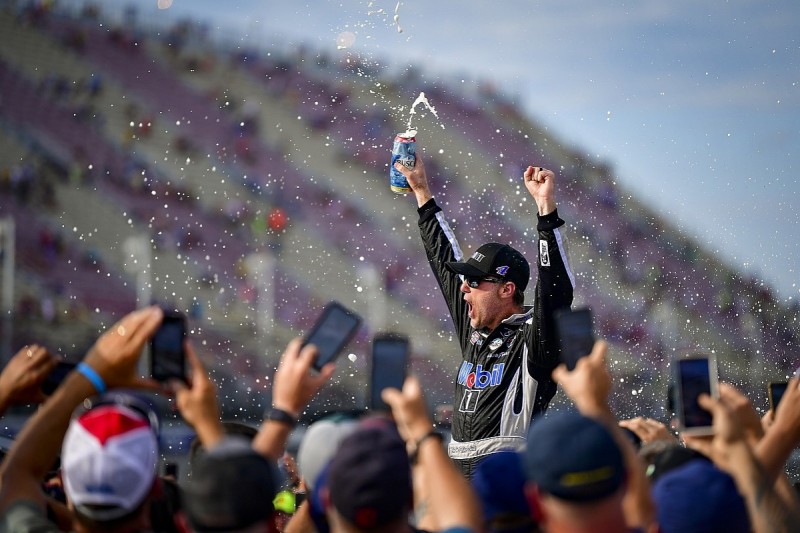 Blaney ended up in 24th while Keselowski finished 17th.

Truex had started at the rear of the field after failing pre-race technical inspection, but surged through the field to reach the top 10 within the first 20 laps.

He nearly won stage two but for a late caution with five laps to go, which negated the track position he had gained with his second fuel only pitstop of the race.

Truex ended up finishing the race in fourth, ahead of Daniel Suarez, Busch and Ryan Preece, who all climbed up into the top 10 in the closing stages as drivers struggled to reach the finish.

Ryan Newman extended his lead over his playoff rivals and is now 16 points clear of the cut-line after finishing 12th.

He entered the race level on points with Jimmie Johnson, who is now 12 points adrift of a playoff place - and leap-frogged in the standings by Suarez.

Johnson was four laps down in stage one after sliding into the wall on the exit of Turn 2 while battling fellow playoff hopeful Clint Bowyer.

Bowyer, who would later be pitched into the wall and retirement by Paul Menard, is now only six points clear of the playoff threshold in 16th place.