Leading on the final lap, Almirola dived to the outside line to see off a challenge from his rivals only to be tipped into a spin by Dillon and sent into the wall.

Childress driver Dillon took what proved to be the only green flag pitstop of the race for the leading pack on lap 156 of 200 and got himself into the top 10 for the final stage, running ninth.

Dillon had not looked a contender in the final few laps of the race, with Penske's Ryan Blaney having dominated the majority of the race by leading 114 laps.

After stage one winner Kurt Busch had jumped his SHR pitbox while leading, forcing him into another tour before trying his stop again, Blaney began a lengthy run out front that included winning stage two.

Hendrick Motorsports driver Chase Elliott had proved aggressive in his passes all race and a failed move during the second stage on leader Elliott left him vulnerable to Penske's Brad Keselowski in third.

Once Keselowski nudged Elliott, it created a chain of events that took out the pair along with Jimmie Johnson and SHR's Kevin Harvick, as well as ending Danica Patrick's final NASCAR race. 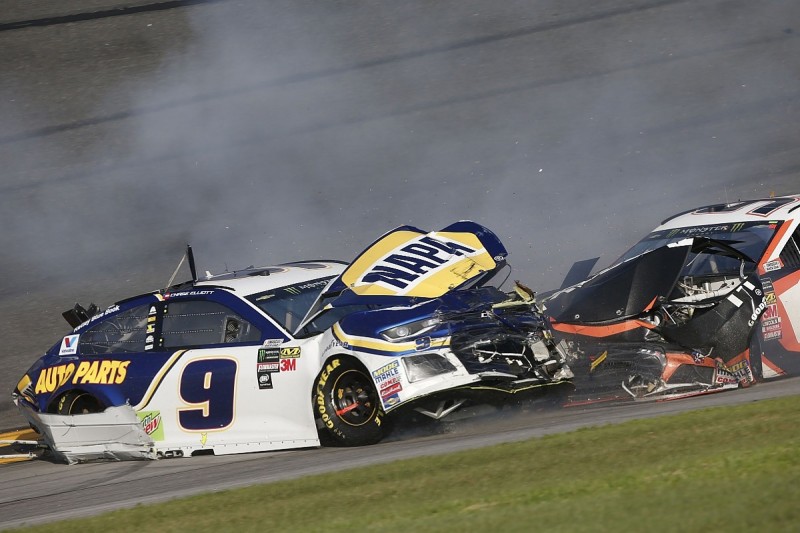 With the pre-race favourites out, reigning NASCAR Cup champion Martin Truex Jr assumed the mantle of challenger having recovered from a low starting point of 24th by prioritising track position and pitting later than his rivals in the first stage, in order to work his way into the top 10 in the final stage.

Blaney had stayed on left-side tyres for almost 90 laps more than Truex, meaning he was vulnerable to the Toyota driver.

But Blaney's chances of a win ended after Hendrick's William Byron's early race damage finally took its toll, causing a puncture and spearing him into the wall at Turn 4 with 10 laps to go to bring out a caution.

Truex's poor restart with 20 laps remaining allowed Hamlin to leap into second, having recovered from a one-lap penalty for refuelling outside his pitbox after leading early in the race.

Having sat out the final two practice sessions, believing he had a superior set-up, Hamlin and the similarly rapid Kurt Busch became Blaney's challengers.

Hamlin surged into the lead with two laps to go, allowing Busch to demote Blaney to third. But the Penske driver's response pushed Busch into the outside wall and took the pair out along with 11 other drivers as well as sending the race into overtime.

With just eight cars left on the lead lap, Dillon was in prime position for the last lap overtime showdown that handed him a first Daytona 500 win ahead of Wallace and Hamlin.