Stewart-Haas Ford driver Almirola held off a fast-approaching Christopher Bell (Joe Gibbs Racing Toyota) to secure third on the grid in the first race, while 2018 Daytona 500 winner Dillon (Richard Childress Chevrolet) passed Bubba Wallace's 23XI Toyota on the final lap of the second race to secure fourth on the grid.

Exiting Turn 4 on the final lap of overtime, Dillon got a big push from Kevin Harvick (Stewart-Haas) and cut to the inside of Wallace, nudged him briefly and cleared him in time to take the chequered flag.

"I knew Bubba was going to try to block it, but I just whipped the wheel and it worked out well," said Dillon.

With David Ragan (Front Row Motorsports Ford) the top finishing non-charter team in the race, the final spot for open teams in the Daytona 500 starting line-up went to Kaz Grala (Kaulig Racing Chevrolet) based on his qualifying speed from Wednesday night.

Hendrick drivers Alex Bowman and William Byron had already secured their place on the front row of the grid from qualifying, but Bowman dropped out of the running in the first race with suspected engine issues.

Byron ran well in the second race, but was eliminated with significant rear damage in a multi-car accident resulting from contact between Garrett Smithley and Brad Keselowski, which also collected Ross Chastain and Noah Gragson. 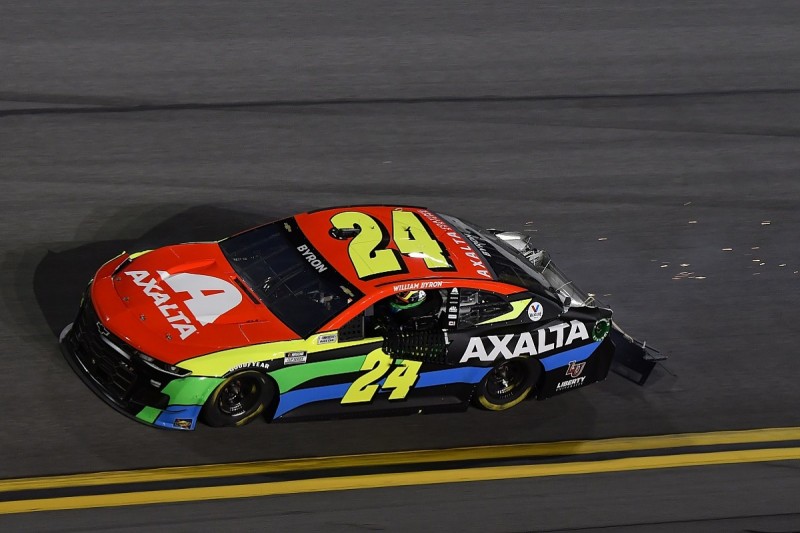 Almirola led 52 of the caution-free 60-lap opening race and was a comfortable winner.

"All these guys on the team built me an incredible Ford Mustang," Almirola said.

"It's a great way to start Speedweeks. This thing is really fast. I can't wait until Sunday. Proud of everybody back at Stewart-Haas Racing.

"It's been a long time since I've got to do an interview at the start/finish line. Things are going great for Tampa Bay!"

Reigning Xfinity Series champion Austin Cindric claimed the second 500 starting position among open teams based on his qualifying speed, after a pit speeding penalty dropped him from contention.