Daytona 500 victor Austin Dillon's race-winning move that forced Aric Almirola to crash on the last lap was a fair move, according to the "devastated" Stewart-Haas Racing driver

Almirola had worked his way into the top 10 going into the final stage and when Penske's Ryan Blaney trigged a pile-up with Kurt Busch, he was elevated into the top four.

With two laps to go on the restart, Almirola took the lead ahead of Joe Gibbs Racing's Denny Hamlin and Dillon.

But when Almirola, who has replaced Danica Patrick at SHR this year, moved to the outside lane to block Dillon's advances, the Richard Childress Racing driver nudged him into a spin and ended his chances of victory.

Almirola said that Dillon's move was fair but admitted he was "devastated".

"He's not driving too aggressively, he's trying to win the Daytona 500 just like I was," Almirola said.

"I saw him come with the momentum and I pulled up to block and did exactly what I needed to do to try to win the Daytona 500.

"I really thought we were going to start this relationship off with Stewart-Haas Racing in victory lane.

"But I'm really proud of everybody. That was a back-up car and we were a half a lap away from winning the Daytona 500." 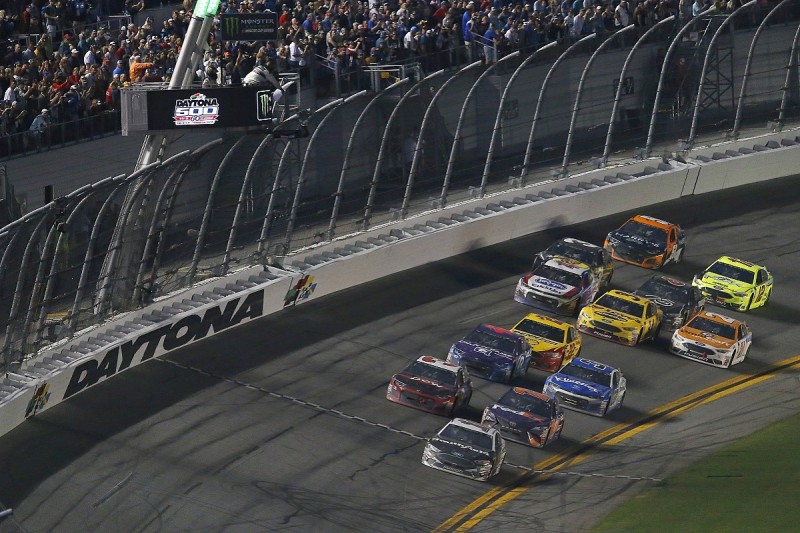 Dillon said he had no other option than to push Almirola.

"I guess I could have lifted and given it to him," he said. "I guess that was my other option, give up a Daytona 500 ring that I'm wearing.

"I'm glad he's not mad. If he needs to do it to me at Talladega for everybody to feel good, I've got a Daytona 500 championship trophy, ring, whatever.

"I don't care. I've got the #3 back in victory lane at Daytona [20 years after Dale Earnhardt's victory with the same number]. It feels pretty good."

The RCR driver also said he has little recollection of the collision beyond the nudge making him vulnerable to eventual second and third place finishers Darrell Wallace Jr and Hamlin.

"I just remember knowing that I wasn't going to lift is the biggest thing," Dillon said.

"It just happened and worked out, and we won the race.

"I remember catching the wheel after it hit him and just kind of wiggling a little bit, but heck, I thought we were just going to race back and they were going to have a shot at catching me, so I was looking in the mirror the whole time back."