Keselowski went into Phoenix with a 19-point cushion over Denny Hamlin in their fight for the fourth spot in the Homestead showdown against Martin Truex Jr, Kyle Busch and Kevin Harvick.

But Keselowski could not get out of the midfield in Sunday's race while Hamlin was a victory contender.

Hamlin crashing out after a tussle with Chase Elliott threw Keselowski a lifeline, and when Matt Kenseth beat Elliott - who could have snatched the fourth title shootout place by winning - to the race victory, Keselowski's championship bid was secured.

"We overcame a lot of obstacles and jumped a lot of hurdles," Keselowski said.

"I am glad I don't have to relive this day. I am just looking forward to going to Homestead.

"This feels a little bit like Christmas. Sometimes you need a little luck on your side. We had that.

"We tried to run the smartest race we could and survive and it ended up paying off in the end."

Keselowski's crew chief Paul Wolfe said it had been nerve-wracking watching Hamlin and Elliott's chances rise and then fall.

"You are doing all you can and then some cautions fall and you start to play strategy games and hope that maybe you catch a break," said Wolfe. 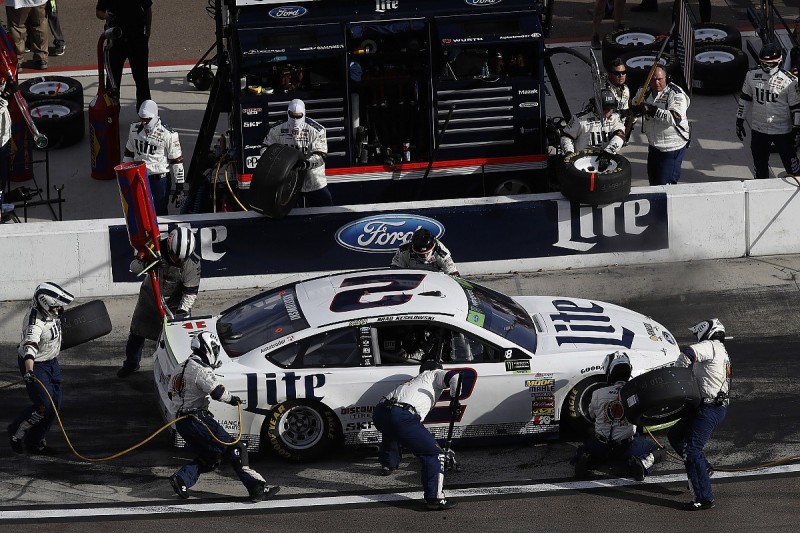 "Then when the #11 [Hamlin] had his issues, obviously there was some hope again.

"It was just kind of staying calm at that point and trying to stay on the lead lap with our points cushion.

"Then the #24 [Elliott] took the lead and at that point you are getting all you can and there was still a way to go.

"It seemed like [Elliott] pushed so hard once he got the lead that the #20 [Kenseth] was able to get back to him.

"It was a frustrating day. A lot of emotions.

"I am proud of my team and the guys and what we have done all season that put us in position to ultimately be off [the pace at Phoenix] but still have enough points to be able to advance to Homestead."

Keselowski insisted his poor run on Sunday had not dented his championship hopes because Phoenix is "a lot different" to Homestead.

"Hopefully we can find what we need to run up front there and catch some breaks and win it. I am very hopeful for that," he said.

"Certainly it would be a stretch by any means by how we ran [at Phoenix] to say we're the favourite, but we are glad to be there, and you never know how those races are going to shake out."