Ducati's satellite outfit decided a shootout across the second half of the season was the best way to decide which of its two riders would get the single 2017 Ducati it has been granted by the factory.

Both of Pramac's bikes in the 2016 season were year-old GP15s, but Petrucci will jump to the newest-possible bike next year, with Redding getting this year's machine as raced by Dovizioso and Andrea Iannone.

The Pramac pair started a mini-championship at Brno, and Petrucci emerged on top by 46 points to 28, with Redding awarded the points for ninth from when they clashed at Aragon.

"I'm happy about this, but I need to work on myself," Petrucci said.

"I need to work with more details, because now I've got the same bike as the top riders and I think I'm missing something to be with them.

Petrucci will miss this week's post-season test at Valencia for "family reasons", with Ducati test rider Michele Pirro filling in.

Redding essentially needed to finish on the podium at Valencia and for Petrucci to fail to finish to get his hands on the 2017 Ducati. 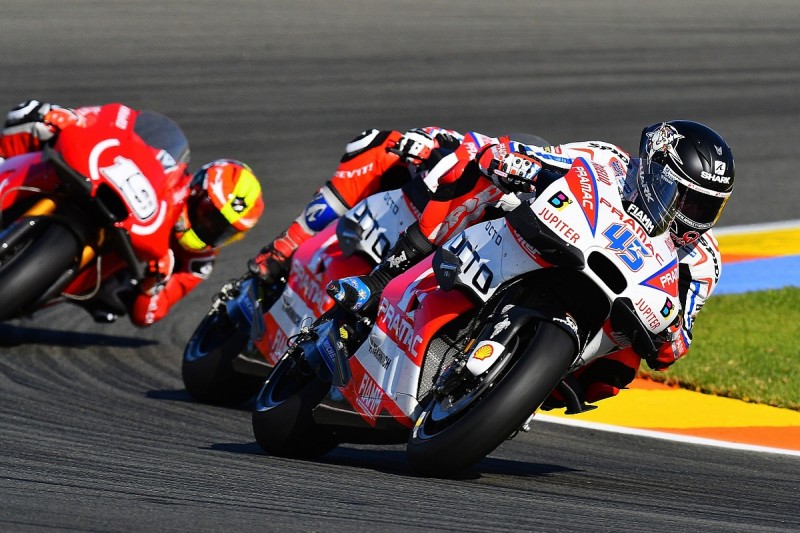 Petrucci and Redding ultimately finished the season finale where they started, in 12th and 14th.

The Briton battled a lack of front-end grip in left-hand corners all weekend, eventually traced to tyre pressure building too much during a run, then lost rear grip in the race.

"I started to get myself in a situation locking the front so then I had to take a little step back in the braking which was OK," Redding said.

"But then rear tyre grip on the left side started to drop like hell and I could hold that pace for a bit but then in one moment it took another step.

"When Danilo passed me, it was like he was on fucking different tyres.

"Even on the right side where I felt good, he had an advantage. On the left side when I had a fucking nightmare, it was no chance.

"Exiting the corner, the first initial touch [of throttle] was OK, open it a little more and it just sort of goes sideways.

"It doesn't go driving forward. I just slide on the spot, I could hear the traction control cut the engine, then it comes back then I go. It was almost a joke.

"I was playing with all the maps to try to help but in the end the tyre dropped off so much in the rear there was nothing I could do, it was out of my control."