The first feeling the likes of Jorge Lorenzo and Maverick Vinales have on their new MotoGP bikes on Tuesday will be "very important", Ducati's Andrea Dovizioso says

After the 2016 season finale concluded on Sunday, teams will test on Tuesday and Wednesday at Valencia, signalling the start of work for '17.

Lorenzo will make his Ducati debut and Vinales will replace him at Yamaha, with Andrea Iannone at Suzuki, Bradley Smith and Pol Espargaro at KTM and four rookies graduating from Moto2 also in the spotlight.

Dovizioso has ridden for three different manufacturers in MotoGP, Ducati following stints with the factory Honda outfit and Tech3 Yamaha, and believes Tuesday morning will be telling.

"I don't think there is one best way to approach the this, and everything is different, every year is different," he said.

"It's quite hard to change, [switching manufacturer is] a very big change, it's very important how you approach the change.

"You have your way to ride with a different brand and you have to adapt. 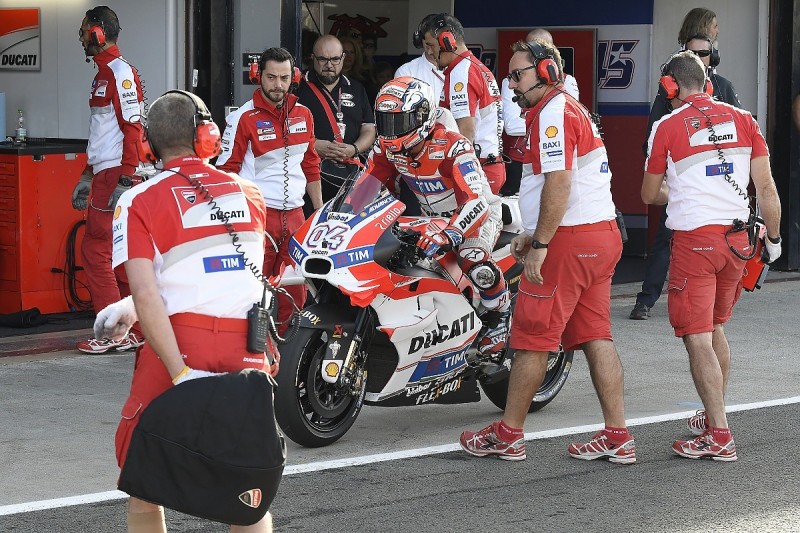 "It doesn't mean that the speed you have in the first test is the reality, but the first feeling is real."

This week's running will be Lorenzo's only laps with Ducati before the first pre-season test at Sepang starting on January 30.

The three-time world champion is not expected to be able to discuss Ducati, or his Valencia test, until after his Yamaha contract expires on December 31.

From Valencia, most teams will head to Jerez late-next week for an additional test before the winter testing ban starts on November 30, with Yamaha instead electing to head to Sepang.