Leist's team-mate Tony Kanaan had led the way for most of the session on a street course considered unrepresentative due to lack of running and cooler temperatures.

But as more drivers lapped and the track rubbered in, Leist climbed inside the top 10 in the final 15 minutes.

He then set his fastest lap, a 1m01.7231s, in the final two minutes of the first practice.

Dale Coyne Racing's Sebastien Bourdais (pictured below), who won the race last year, put in a last minute lap to go second and was 0.0488 seconds slower than Leist. 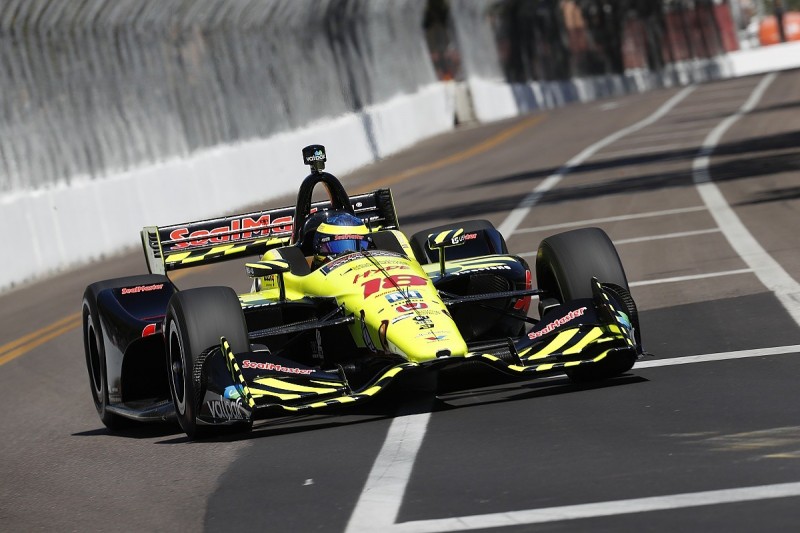 Bourdais' time sent the two Andretti cars of Ryan Hunter-Reay and Alexander Rossi into third and fourth after the pair had battled for the top spot in the final 10 minutes.

Hunter-Reay and Rossi were among several drivers from the top three teams of Penske, Andretti and Chip Ganassi Racing who waited for the track to rubber in somewhat before joining.

Ganassi's Scott Dixon was another to take that approach and progressively improved his time through the running to go fifth fastest late on.

Former DTM driver Robert Wickens completed his first session as a full-time IndyCar driver for Schmidt Peterson Motorsports in sixth and completed 20 laps, tied for the second most tours.

Penske's Simon Pagenaud was the team's quickest driver, running as high as third before falling to seventh.

Team-mate Will Power was eighth ahead of Kanaan, who caused the only red flag by spinning at the sharp-right Turn 4 following his early leaderboard-topping time.