Scott Dixon claimed 2017 Indianapolis 500 pole with the fastest qualifying speed since Arie Luyendyk's 1996 record, while Fernando Alonso earned fifth on the grid for his IndyCar debut

"Conditions were a bit better today, and we took a bit of a gamble trimming out," said Dixon.

"It feels damn good. Chris [Simmons, race engineer] trimmed the car, and even before we went out there I said 'Man, I think we've trimmed the car too much' and I did have to lift a little bit.

"But that first lap was huge. I can't thank the team enough.

"The emotions that you get at Indianapolis are just crazy. Obviously this isn't job one. The real deal comes up in a week's time. The pole is its own race, its own deal, its own weekend.

"The significance of winning the pole is big, but obviously we're here to win the race.

"In 2008 we won from the pole, so hopefully we can replicate that year."

Dixon's average was precisely 0.5mph faster than two-times Indy polesitter Ed Carpenter, who claimed second and pushed the defending Indy 500 champion Alexander Rossi into the outside of the front row.

Rossi's Andretti team-mate Takuma Sato brushed the wall twice on his way to fourth, the only driver other than Dixon and Carpenter to grab a lap of 232mph.

Alonso was told to hold the gearbox in fifth on his second lap, having also used sixth on his opening lap. Afterwards he reported that it was also too loose.

JR Hildebrand made it two Ed Carpenter Racing Dallara-Chevrolets in the top six, with Tony Kanaan and Marco Andretti in seventh and eighth.

Will Power, as the only Team Penske driver in the Fast Nine, didn't appear to have the straightline speed to feature. 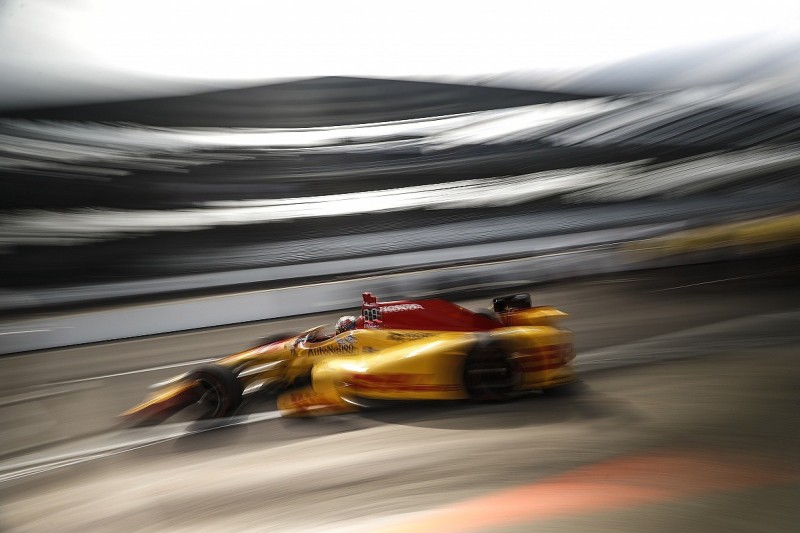 Ryan Hunter-Reay, the 2014 Indy 500 winner, had earlier topped the qualifying session for those outside the Fast Nine so will start 10th.

He was the only driver in that group to breach the 231mph barrier, and achieved it with all four of his laps.

Hunter-Reay was around 0.9mph faster than Dale Coyne Racing's rookie Ed Jones, who was the only other driver to achieve 230mph with all four of his laps and confirmed the speed his team-mate Sebastien Bourdais had showed on Saturday before the huge crash that prematurely ended his 2017 season.

Oriol Servia will be on the outside of the fourth row in the additional Rahal Letterman Lanigan Racing Dallara-Honda, ahead of Mikhail Aleshin, Graham Rahal, Max Chilton and Charlie Kimball, who brushed the wall.

Last year's polesitter James Hinchcliffe will roll off from 17th - a lowly starting spot yet ahead of four Penske entries.

Jack Harvey thumped the wall on Turn 2 on his second lap, while Zach Veach ran race downforce, but said the AJ Foyt team is still struggling to diagnose the issue tit has had since he shunted on Friday.