Alexander Rossi felt the main reason for his Indianapolis 500 defeat was a Honda straightline-speed deficit, and he was also fuming over pitstop delays and backmarker Oriol Servia's driving

Rossi charged into contention in the second half of the race, and was achieving better fuel mileage in his Honda-powered Andretti Autosport car than eventual winner Simon Pagenaud was getting in his Penske Dallara-Chevrolet.

But a late red flag for a multi-car crash neutralised that advantage, and Rossi ended up beaten by 0.2 seconds in the duel to the flag.

"There's not much to say," said Rossi. "I think you all saw it. We just didn't have the straightline speed.

"There's not much we can do about that from my side, inside the car. Obviously the #22 guys [Pagenaud's crew] fully deserve it. They were on pole, led probably 70% of the laps.

"But that last yellow really hurt us because we were doing a lot better on fuel mileage than he was, so that was the first kind of nail in the proverbial coffin, and the second one was we didn't have the speed out front.

Rossi was also furious that having got himself into lead contention, he suffered an extended pitstop caused by the fuel hose not locking onto the buckeye.

He said his anger was due to this being the third time in his four Indy 500s that he had been struck by refuelling issues.

"When you come here four times and three of the times you can't get fuel in the car, I think you can understand why I was upset," he said.

"It wasn't a human error, it was a mechanical problem, but still, it's not something that we can have here.

"It's the biggest race in the world, and 75% of the time we can't get fuel in the racecar. We need to address that for sure."

Pagenaud moved across the track on the final lap to try to break the tow to Rossi, but the American dismissed any thought of protesting the move, saying: "He was moving in reaction for sure, but the last lap of the Indy 500, they're not going to do anything about it. It's kind of irrelevant." 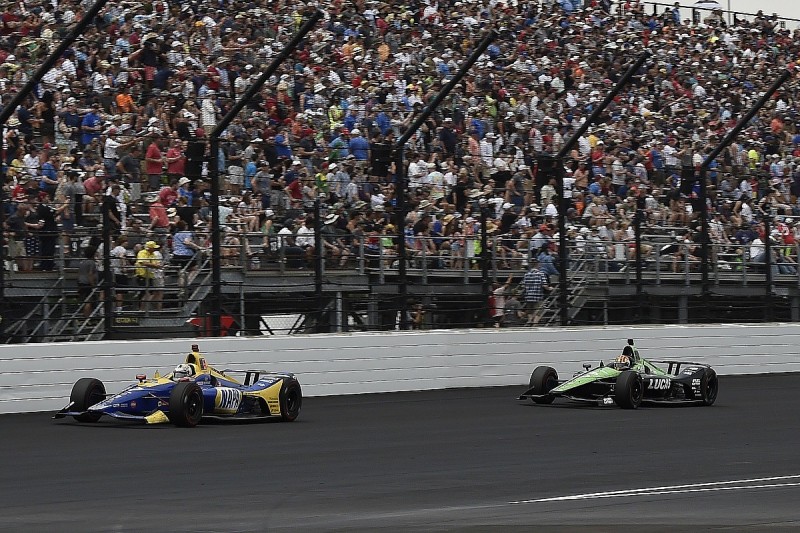 But he did slam Servia for being obstructive as he attempted to lap the veteran following his pit delay.

"I think it was one of the most disrespectful things I've ever seen in a racecar, to be honest," said Rossi.

Although he was disappointed by Honda's power deficit, Rossi defended the firm's efforts.

"Things ebb and flow," he shrugged. "We've been a strong team for a couple of years, and it goes in cycles.

"Honda is doing a great job, and working their butts off to continue pushing this engine that's been around for the better part of a decade to continually bring updates.

"I think the step that they took this year compared to last year was good. It got us a lot closer.

"Ultimately it wasn't enough, but they're doing everything they can, and until there's a change in the regulations, everyone is kind of at their maximum.

"We are definitely stronger on some tracks, they [Chevrolet] are stronger on others, and that parity is kind of what makes this series what it is.

"You're never going to have it completely go your way as much as you'd like to. But I don't think there's any fix necessary.

"They're working hard every day to try and make it happen."