Pagenaud won the IndyCar title in his second year with Penske in 2016, but went winless last season - leading to speculation that he might be dropped for his Indy 500 sparring partner Alexander Rossi next year.

But Pagenaud has emphatically rebounded this month, starting with victory in the wet in the Indianapolis road course race and then winning the 500 from pole.

"I don't think that I said anything to the media about Simon," said Penske.

Asked to confirm that meant the 35-year-old would definitely be remaining with the team for 2020, Penske replied: "What do you think? Do you want to answer that question for me? Absolutely."

Pagenaud hailed the set-up team manager Kyle Moyer - his strategist - and his race engineer Ben Bretzman had given him, and the tips on oval racing from his Penske team-mates over the years for being able to win the battle with Rossi. 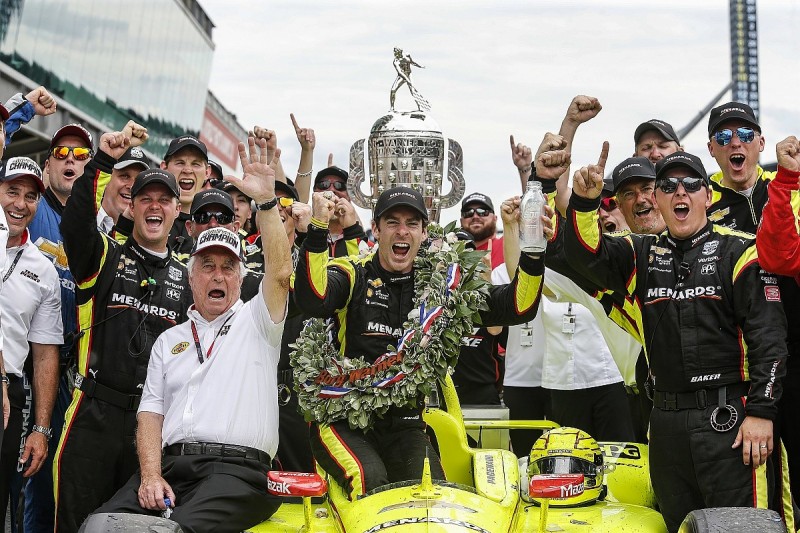 "We had the perfect amount of downforce on the car, all the right decisions were made," said Pagenaud.

"The car was just fantastic, and I realised that I could run second as long as I wanted and pass people when I wanted.

"Rossi I knew was going to be the biggest threat for a while because he looked really strong. He came back from the back and he's always really strong in these races, so he was a bit of a concern.

"I let him by to save fuel again just before the yellow came out, so that was a bit of a bummer. But we were able to get him back.

"Quite frankly I wasn't really worried about getting back, I was just worried about the rhythm, when to get him back to finish first.

Pagenaud described the Indy 500 win as "the biggest dream of my life come true" and said he had decided from the outset that his race tactics would be "about attacking".

The win in the double points event puts him into the championship lead by one point over team-mate Newgarden, who finished fourth.