Poleman Pagenaud had controlled most of the first half of the race, but Andretti Autosport driver Rossi's car came on stronger after the third round of pitstops and began to rapidly advance towards the front.

In the closing stages Rossi took the lead moments before a collision between frontrunners Sebastien Bourdais and Graham Rahal that led to a chain reaction multi-car crash and brought out the red flags.

The race restarted with 13 laps to go, and Pagenaud immediately reclaimed the lead with a successful attack on Rossi.

The pair swapped places twice more in quick succession before a spell of Pagenaud leading and successfully rebuffing all of Rossi's attempts.

Rossi managed to get around the outside of Pagenaud into Turn 1 as they began the 198th of the 200 laps, but Pagenaud returned the favour one lap later and held on to win by 0.2086 seconds.

The result meant Pagenaud repeated Penske team-mate Will Power's 2018 feat of winning both the Indianapois road course race and the 500 in the same year. 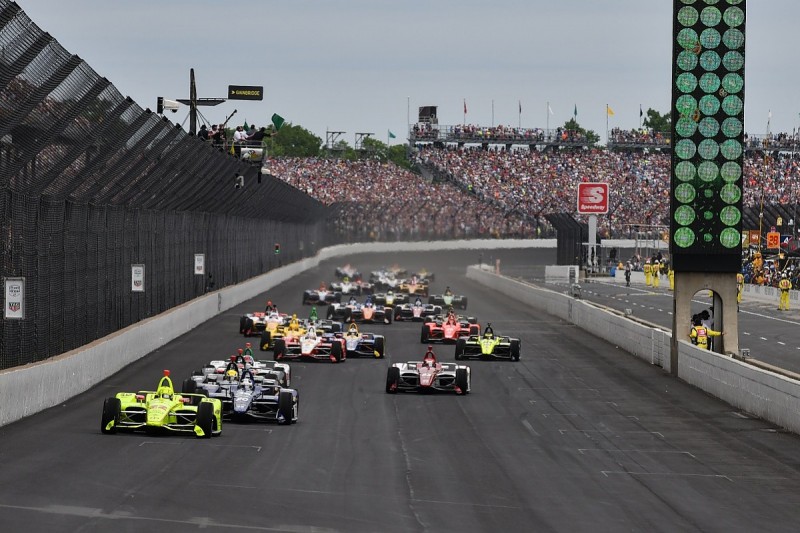 Takuma Sato charged back from falling to the rear of the field with an additional pitstop for a loose wheel to shadow Pagenaud and Rossi's lead fight and finish third.

Josef Newgarden was also right in contention at the finish and took fourth, having led for a spell in the middle of the race.

Penske had three cars in the top five, with Will Power also on a recovery charge to take fifth.

He had run second to Pagenaud for a spell early on but was penalised for running over an air hose when he came into a pitstop too fast.

Front row starter Ed Carpenter and team-mate Spencer Pigot were Penske's main threats initially but ended up back in sixth and 14th.

Veteran Tony Kanaan got AJ Foyt Racing in the top 10 in ninth, followed by Andretti Autosport's guest driver Conor Daly - a frontrunner for much of the day - and back row starter James Hinchcliffe.

Ganassi had a disappointing day. Both Scott Dixon and Felix Rosenqvist gained ground with long stints after qualifying down the field, but Dixon could only finish 17th following a late extra stop for floor attention and Rosenqvist was among the cars caught up in the Bourdais/Rahal crash.

Three-time Indy 500 winner Helio Castroneves, making one of his regular IndyCar returns for the Indianapolis month, was only 18th in the fourth Penske entry following a pitlane clash with James Davison.

Marcus Ericsson and Jordan King finished back in 23rd and 24th after further pit incidents, in Ericsson's case a wild spin and in King's an unnerving moment when he clipped a tyre that struck one of his crew mwmbers.

Colton Herta, Honda's top qualifier, ended up as the race's first retirement with a very early problem he believed to be a gearbox failure.

Qualifying hero Kyle Kaiser, who had bumped Fernando Alonso and McLaren out of the field, crashed out.

The tech changes that should improve the Indy 500