Newgarden won in only his third start with Penske at Barber, but fell from third to sixth in the standings with poor results from the Indy road course race and 500 in May.

Winning in Toronto on a day when championship leaders Scott Dixon and Helio Castroneves could only finish 10th and eighth brought him back to within 23 points of Dixon's tally with five races to go.

"It's a good day with where Scott finished. I'm excited about that," said Newgarden.

"The big thing for us is we can't get into any more incidents like we have the first half of the year.

"I think the month of May is really what killed us in the points championship.

"We had a bad GP [road course race] with a pitlane speed limiter issue, and a bad Indy 500 wrecking out with 20 laps to go, getting caught up in something.

"We've had some races that we've had to pick up from a deficit, and I think if those weren't there, we'd probably be leading the championship.

"We have to prioritise having solid finishes from here to the end.

"I think if we're the most consistent, we absolutely can win the championship."

Newgarden had been fourth in the opening stint in Toronto, but pitted just before a yellow was called due to Tony Kanaan crashing.

That meant he cycled to the front as others stopped and was able to control the rest of the race. 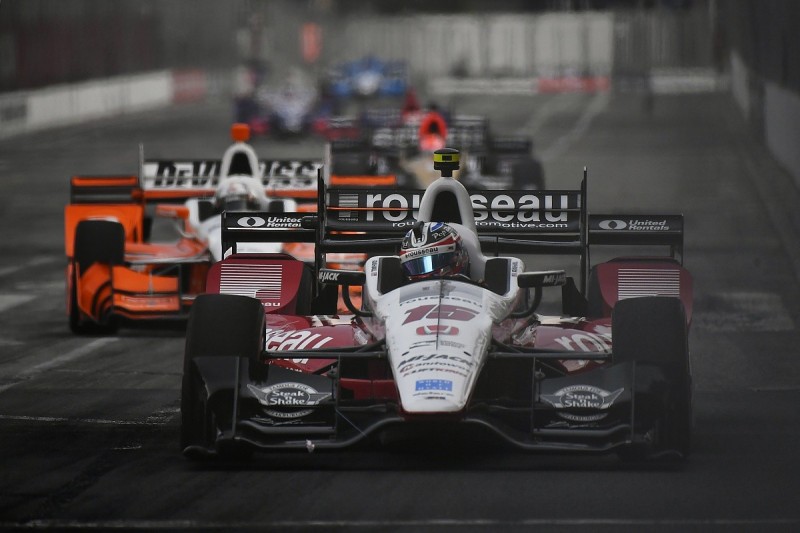 Though Newgarden felt he "could still have potentially come out victorious" without the yellow as "we still had a plan", Graham Rahal argued that the caution timing had robbed the race's pacesetters.

Rahal had been running third behind Newgarden's team-mates Helio Castroneves and Simon Pagenaud when the incident happened.

"I got the call after we passed pit-in," said Rahal, who finished ninth.

"Newgarden was just lucky because he was falling off the train of the three of us.

"He was 2.5 seconds behind us, or just enough to get the call. When they said to me 'pit, pit' I was turning into Turn 9.

"We played it right but got unlucky. The three best cars didn't win the race or finish 1-2-3. "There was nobody that was a match for the three of us all day.

"Congrats to Josef, he still brought it home but you could see in the first stint that Simon, Helio and myself were taking off and I felt that was a pretty easy pace for us to maintain.

"Unfortunately the way the officials have decided to close the pits these days, luck plays a huge factor and today it bit us."

Alexander Rossi, James Hinchcliffe and Marco Andretti completed the top four on a similar strategy to Newgarden, with Pagenaud the best-placed of the early leaders as he got back to fifth.