Hunter-Reay's 1m05.1950s in the afternoon session on the 'red' soft-compound tyres was only one second off Will Power's 2017 pole time with the high-downforce manufacturer aerokits.

It was also good enough to beat Power into second place on Friday by 0.1421 seconds.

Power had an eventful day that included involvement in an incident that brought morning practice to an early conclusion.

He spun in the closing minute of first practice as he had to swerve off line to avoid his Penske team-mate Simon Pagenaud - who was driving very slowly at Turn 9, the blind-crested right-hander.

Power let his broadside and stalled car roll backwards to get as far off the racing line as possible, but AJ Foyt driver Tony Kanaan was rammed off course by an unsighted Charlie Kimball in the confusion.

Kimball was parked for 15 minutes of practice two as a penalty for the incident, which caused the session to be red-flagged a minute early. 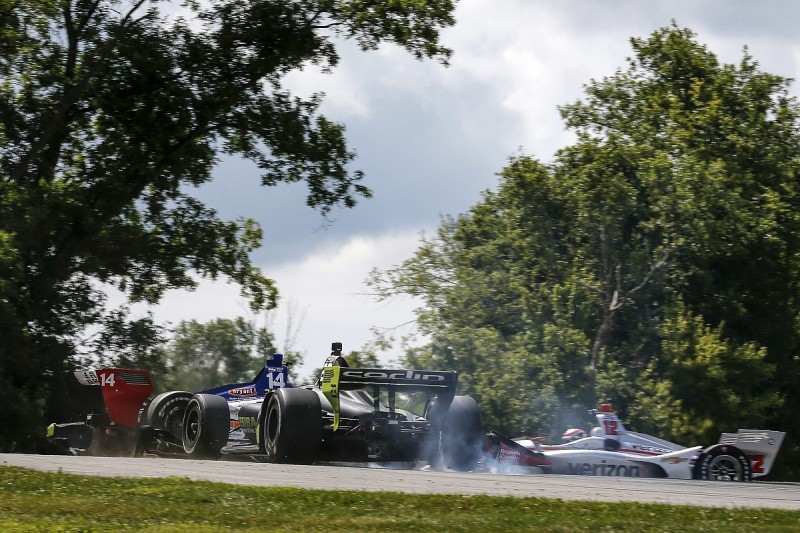 In practice two, Power had a wild off-course excursion at Turn 4 as he came to the end of his run on the primary compound tyres, but the car was unharmed and on reds he swiftly bounced to the top of the times before being deposed by Hunter-Reay.

Local hero and 2015 winner Graham Rahal was third in afternoon, a mere 0.077s behind Power and only 0.0171s in front of Spencer Pigot, who again impressed for Ed Carpenter Racing.

Alexander Rossi and Marco Andretti made it three Andretti cars in the top 10, but the fourth car was less fortunate.

Zach Veach had an early spin at Turn 5, and although he kept the engine running he couldn't make it over the crest in the grass and his car beached itself.

He still ended the session 12th and top rookie using the softer tyres.

Chip Ganassi Racing's Scott Dixon and Ed Jones were seventh and eighth, while Josef Newgarden was another Penske driver who spun off the track without making contact with anything other than kerbing and grass. He finished the session in ninth.

Arguably the most impressive performance came from Jack Harvey, who finished 10th. The part-timer in the Michael Shank Racing entry wound up ahead of his Schmidt Peterson Motorsports team-mates.

Pietro Fittipaldi made his IndyCar return on Friday after his leg-breaking crash at Spa during the World Endurance Championship opener at the start of May.

He was 17th in the morning, 1.5s off his pacesetting Dale Coyne Racing team-mate Sebastien Bourdais, and then had his brake master-cylinder changed for practice two to make the brake pedal more sensitive and ease his recovering left leg.

Bourdais had been quickest by 0.3383s over Newgarden in the opening session, with Dixon, Takuma Sato and Pigot completing the top five.

Other incidents in that session included Robert Wickens stopping with an engine failure having completed just six laps and a red flag for Matheus Leist running off course.

How an unloved device created 'the greatest motor race'