Juncos Racing expects to expand to become a two-car team in IndyCar next season, although it expects to again have a rotating cast of drivers to help financially

The team last ran two cars in the 2017 Indianapolis 500 after a strong pedigree in IndyCar's feeder categories.

It then stepped up to the top-tier in 2018 and has taken part in 11 of the 15 rounds to date with Indy Lights champion Kyle Kaiser, single-seater journeyman Rene Binder and former Force India Formula 1 reserve driver Alfonso Celis Jr, who will drive at Portland this weekend.

Team owner Ricardo Juncos - who confirmed the team would not contest the 2018 season finale at Sonoma - said a lack of drivers with budget means he will have to rotate drivers again next year, but that an expanded operation made "much more sense".

"Having two cars is the right way to go, definitely, because we want to improve our performance always, and it's very tough on rookies - or even quite experienced drivers - if they have no one to share data with over a race weekend," Juncos told Autosport.

"[Running one car] doesn't help the team, either, because if you're missing half a second, the engineer will think, 'Is it because of us? Is it the driver? Where do we find this time?

"So running a second car can help take away those doubts.

"We currently have a racecar and a spare that are ready right now, but we have also taken delivery of a third chassis and that should be ready two-to-three weeks after Portland. We won't be entering Sonoma." 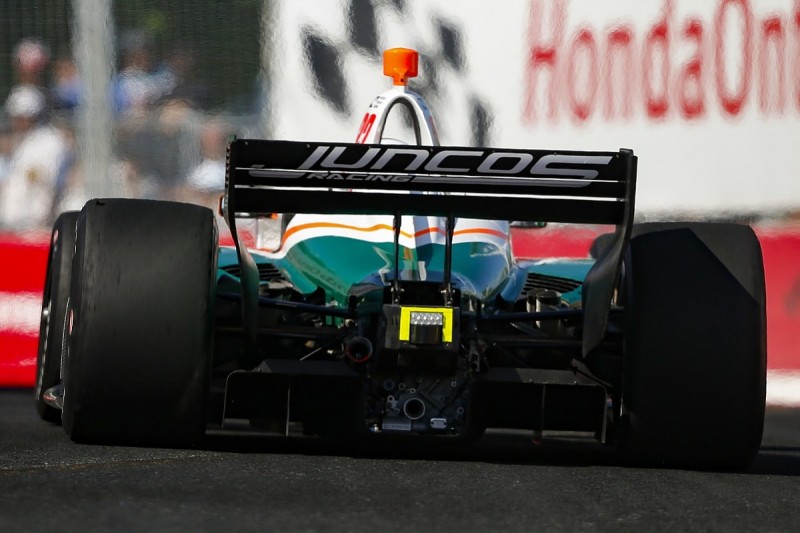 Juncos added he was aware of the "economic reality" regarding drivers.

"Unfortunately we are without team sponsors at the moment, so the economic reality is that we have to run drivers who bring money, but we are working very hard to find team sponsors," he said.

"That's part of my job as an owner.

"There are no drivers out there with a complete budget for a whole season, so I think next year will be somewhat like this year where we run a few drivers.

"But with two cars, we are at least giving them and ourselves the maximum chance to show what they can do."

Juncos is also entering the IMSA SportsCar Championship in 2019, joining the top-tier category with a Cadillac DPi-V.R.

The team remains non-committal on the future of its Indy Lights and Pro Mazda squads, amid Mazda's withdrawal as the feeder series backer.