Ed Carpenter seized pole position for the 2018 Indianapolis 500 as the only driver to hit the 230mph mark in qualifying, denying Penske a front row lockout

ECR and Penske locked out seven of the 'Fast Nine' places, with Helio Castroneves and Carpenter having gone head-to-head on Saturday.

But in qualifying proper, no Penske driver could match Carpenter - whose first three laps on his four-lap run proved to be faster than any of second-placed qualifier Simon Pagenaud's.

Pagenaud headed his team-mates Will Power and Josef Newgarden.

Third-placed Power believed he added too much downforce to his car, having been consistently the fastest driver without a tow in the build-up to qualifying.

Sebastien Bourdais put his Dale Coyne Racing-run car fifth and the highest-placed Honda runner despite a costly lift into Turn 1.

ECR's Spencer Pigot was sixth ahead of team-mate Danica Patrick, who also made a slight error through Turn 1, while fourth Penske driver Helio Castroneves could only average 227.859mph after feeling his car was loose throughout his run.

That put him comfortably behind Patrick in eighth and ahead of Chip Ganassi Racing's Scott Dixon. 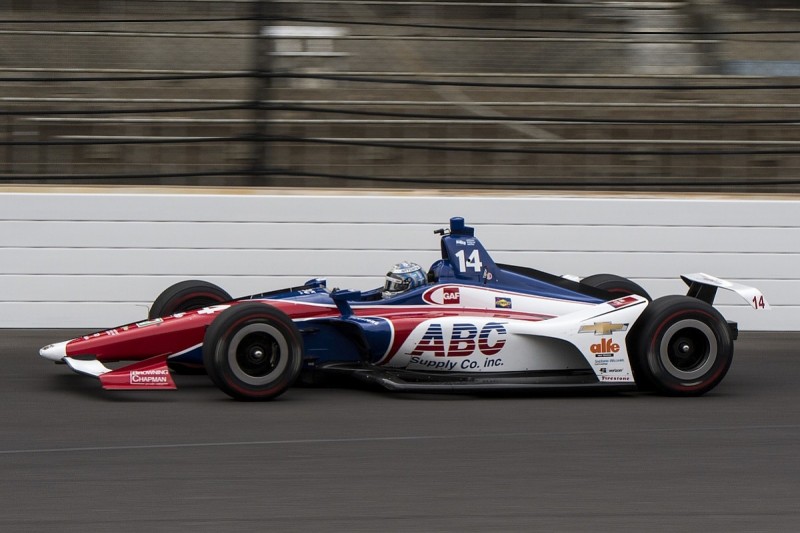 AJ Foyt Racing locked out two spots on the fourth row, with Tony Kanaan beating impressive rookie team-mate Matheus Leist to 10th in the earlier qualifying session. The team had been the fastest without a tow in the morning's practice session.

Honda outfit Andretti had looked close to the Chevrolet-powered Foyt outfit, with Marco Andretti qualifying 12th, but its six cars experienced varying fortunes in the session.

Alexander Rossi had been a match for team-mate Andretti after his first two laps, but a 2mph drop off on his last lap dropped him down to 32nd - just a day after he narrowly missed out on a Fast Nine spot.

That meant one-time Indy 500 winner Ryan Hunter-Reay was the second-best Andretti qualifier in 14th after an overly aggressive final lap cost him.

Ganassi's Ed Jones almost crashed on his qualifying run, as balance struggles meant he was loose in corner entry and understeering on exit, and was limited to 29th.

Defending Indy 500 winner Takuma Sato was 16th, but Rahal Letterman Lanigan Racing still struggled across its three cars as Graham Rahal - running exactly the same set-up as his team-mate - was only 30th and confused about why he was so much slower.

Schmidt Peterson Motorsports's Robert Wickens was baffled by a 2mph loss of pace between practice and qualifying as he secured 18th for the race.

Carlin's first Indy 500 will start with both cars in the top 20 as Charlie Kimball secured 15th and Max Chilton took 20th.