Schmidt Peterson Motorsports has not ruled out James Hinchcliffe driving in another car after failing to qualify for the Indianapolis 500, although Hinchcliffe currently believes he "won't start the race"

Hinchcliffe failed to qualify for the race after a late second run was aborted by an estimated $20 tyre pressure sensor failure, with no time to make a third run.

His #5 car is the only SPM-affiliated entry not to have made the race, with full-season team-mate Robert Wickens starting alongside one-off entrant Jay Howard and part-season runner Jack Harvey, who is competing through a partnership with Michael Shank Racing.

As the car qualifies for the Indianapolis 500, rather than the driver, there had been speculation that SPM could bring Hinchcliffe into the race by buying him a drive elsewhere on the grid.

SPM told Autosport it was "still working things out internally" and would not deny speculation that Hinchcliffe could drive elsewhere.

Hinchcliffe spoke on IndyCar's Indianapolis Motor Speedway Radio Network to say he was pessimistic about racing.

"It's [being bumped out] slowly setting in," he said. "To not make the big show is devastating.

"Yesterday wasn't my worst day at IMS [referencing his life-threatening practice crash in 2015]. And I made it back from that.

"Honestly, you know as much as I do [about an alternative drive]. I know there have been conversations but certainly nothing concrete.

"We didn't get the job done when we had to. At this point, I believe I won't [start the race]."

Hinchcliffe is a Honda ambassador and one of IndyCar's most popular drivers, and there was speculation that the manufacturer and the series would look into securing him a seat.

He is also currently fifth in the 2018 standings, with the Indy 500 a double-points race. But IndyCar told Autosport that "any such decision would be made by the race team".

A Honda spokesperson added that "Honda is not taking any kind of lead role in any discussions that may be taking place between individual teams".

Hinchcliffe's options for the Indy 500 are likely to be limited. While there are 17 Honda-powered entries left in the field, 10 are full-time drivers.

It has been suggested that Hinchcliffe could replace team-mate Howard, but he has has publicly ruled out stepping aside.

A buy out of a Dale Coyne Racing seat has also been suggested, although Zachary Claman de Melo took to Twitter to rule out his drive being taken.

His team-mate Conor Daly was also quick to deny that he would step aside for Hinchcliffe.

Even if Hinchcliffe had secured a replacement drive in time, he would not have been able to take part in Sunday's qualifying under IndyCar rules.

A car must be qualified by the same competitor both days, and a replacement driver would then be mandated to start at the back of the field for the Indy 500. 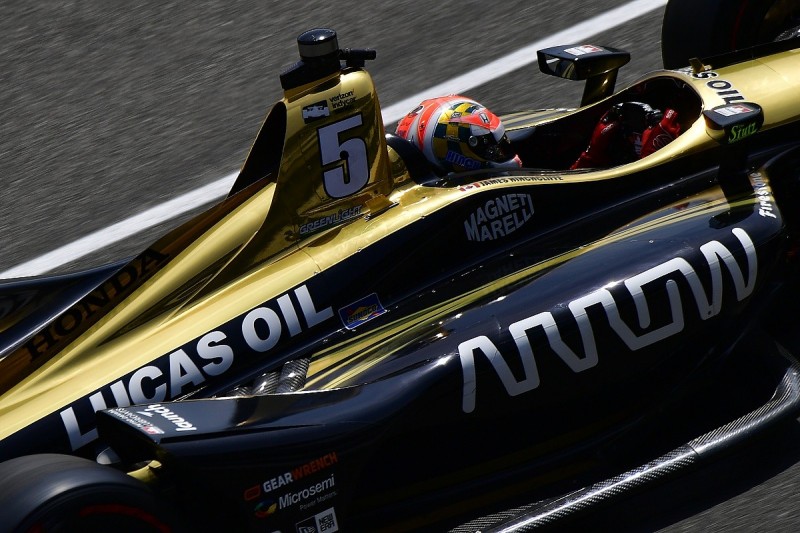 The return of bumping to the Indianapolis 500 provided exactly the drama it should when Hinchcliffe failed to qualify, evoking memories of then-defending CART series champion Bobby Rahal missing out on the 1993 race.

IndyCar is between a rock and a hard place. The loss of Hinchcliffe is dramatic but, as a Honda ambassador and with a strong presence from his primary sponsor Arrow Electronics, there has been talk that an exception should be made.

But IndyCar allowing Hinchcliffe in would not only hurt tradition but sets a dangerous precedent that full-time drivers should be protected over one-off and part-time entrants.

Having just succeeded in bringing back bumping thanks to IndyCar's new direction, few things would hurt future bumper Indy 500 grids than making an exception for Hinchcliffe. Hinchcliffe, to his credit, has played the situation perfectly.

Firstly by defending Pippa Mann from criticism after she beat him on track and stopped him attempting a late third run to qualify, and secondly with his honesty and openness since Saturday evening.

The fact Hinchcliffe and SPM can still get him into the race by agreeing a deal with another entry is a different matter, and as long as that avenue is open, that's as close enough to full-time driver protection as needed.