Ed Carpenter Racing driver Hildebrand had moved out to pass Aleshin's Schmidt Peterson car for 11th going into Turn 1 for the final time when the pair rubbed wheels.

The thrashing steering wheel damaged Hildebrand's hand, and IndyCar medical director Dr Geoffrey Bellows wants to re-evaluate the American before clearing him for the next round at Barber Motorsports Park in a fortnight.

"I was making a move on Mikhail Aleshin and I could tell he was struggling," said Hildebrand.

"I was out of push-to-pass so I was trying to make a proper, full-out pass down the front straightaway.

"He had been starting to move over, not a major blocking manoeuvre but enough to assert his line.

"He hit the brake a lot earlier than I was expecting and I ended up running into the back of him.

"In doing so, it ripped the steering wheel from my hand and I ended up tweaking it." 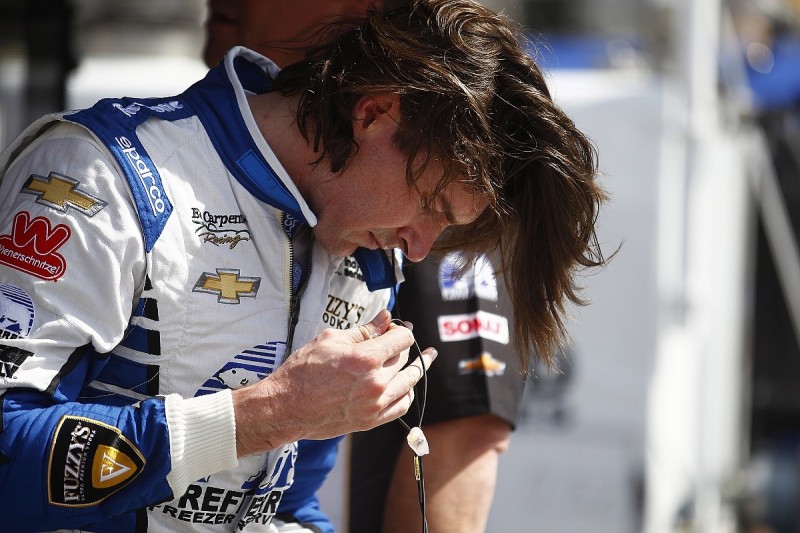 IndyCar race control ruled that Aleshin had blocked Hildebrand, and reversed their initial finishing order to give the American 11th place.

Aleshin felt he was blameless in the incident.

"Hildebrand crashed into my rear and destroyed my chance to make the top 10," said Aleshin, who had been struggling for pace after sustaining front wing damage in a clash with Tony Kanaan.

Long Beach was the second event of Hildebrand's full-time IndyCar return with ECR, having not contested a complete season since 2012.

"At the end of the day, to come home with an 11th place finish isn't terrible," he said.

"It is a bummer though as we were certainly on our way to finishing in the top 10 and now we are in a bit of a jam going forward.

"Hopefully I can get back to it before the next race."