Have A Go Hero: When a sportscar ace got an unexpected IndyCar chance

The 2013 Sonoma IndyCar race is best remembered for Scott Dixon connecting with a wheel carried by a member of Will Power’s pit crew, who was tossed skywards. But for a German sportscar all-rounder, it’s also significant as their only US open-wheel start in a career that counts multiple titles in the American Le Mans Series and victory in the Spa 24 Hours

It’s not often that a seasoned sportscar veteran gets a shot at a professional single-seater gig in their mid-30s. But although his IndyCar career lasted just one race, which was ended by an engine failure, Lucas Luhr can claim to be part of that select club after his 2013 cameo at Sonoma for the Sarah Fisher-Hartmann Racing team.

Having won American Le Mans Series titles with Porsche in 2002 and 2003 (GT), Penske in 2006 (LMP2) and Audi in 2008 (LMP1), Luhr was one of US sportscar racing’s foremost names as the ALMS prepared to merge with Grand-Am for 2014 under the new United SportsCar Championship moniker (later, colloquially known as just IMSA, in which LMP2 and Daytona Prototypes would form the top class).

The ALMS LMP1 division was a shadow of its former glory in its final two years, Luhr returning Stateside for 2012 after joining Michael Krumm to win the GT1 World Championship with the JRM Nissan outfit in 2011. He added two more ALMS titles alongside Klaus Graf for the Muscle Milk HPD outfit, but had little by way of regular competition.

Luhr and Graf enjoyed a season-long fight with Chris Dyson and Guy Smith’s Dyson Racing Lola – Muscle Milk’s only full-season opposition – in 2012, but as Dyson brought a rolling roster of drivers in 2013, the German pair was only beaten twice all season by World Endurance Championship regular Rebellion Racing, which entered four of the 10 rounds.

It was during this season of dominance that the then-34-year-old Luhr was approached to join Honda partner team SFHR, partnering promising young gun Josef Newgarden in his second year with the team.

“Basically it started off as a thank you from Honda saying, ‘Hey, you won us two manufacturer championships and two driver championships, if you want, you can try an IndyCar’,” recalls Luhr, whose previous appearance at Sonoma had come in a Porsche GT car in 2004. 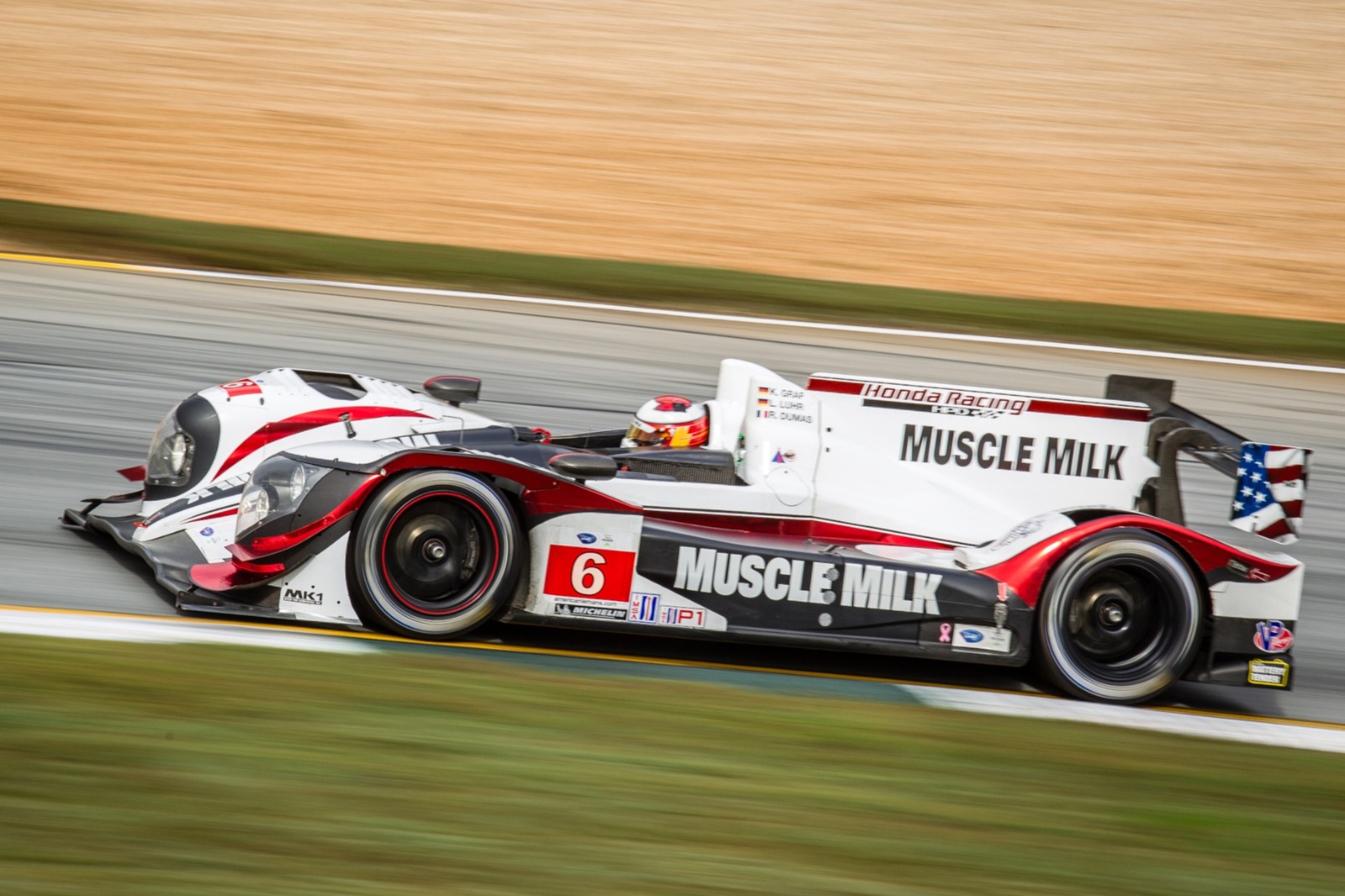 Luhr's IndyCar opportunity was a reward from HPD for his prowess in the marque's LMP1 car, entered by Muscle Milk in the ALMS

After feeling sick when he tried the car virtually on the HPD simulator in California – “I had tonnes of water, I took a half an hour nap and then I sat in the sim for four hours, no problem” – he found the real-life car much harder to drive than expected when he made his first exploratory laps of Sonoma in a pre-event test.

“Everyone was telling me how hard the car is physically to drive, but I was telling myself, ‘It can’t be that hard, I drove cars without power steering before,’” he says. “But I remember when I left the pits, I said on the radio, ‘Guys, there is something wrong with the steering, I think it’s broken’. I couldn’t believe how hard it was!

“It was fine with the rest of the body, but my arms and fingers, especially the forearms, I thought they were gonna fall off! So between the two dates, every day I went go-karting and I just trained the forearms and my fingers to basically hold the steering wheel.”

"When the engineer said, ‘Green, green, green’, I put the foot down and, ‘Boof!’ That was it. Otherwise I could have done the race the following week at Baltimore, but because Dixon was up for the championship, they had to keep the reserve engine for him" Lucas Luhr

Aside from the physical acclimatisation, there was plenty of mental recalibration to do as well. Having not raced a single-seater since 1998 in German Formula 3, when he’d mustered two podiums at the Lahr airfield circuit, there was plenty for Luhr to unlearn – not least adapting to a spec Dallara that in many regards had less performance than his regular LMP1 mount.

“I had to reset myself because at that time the LMP1 car had carbon-fibre brakes, and tonnes of downforce,” Luhr explains. “I remember braking first time towards the chicane, I completely went straight because there was no brakes, no downforce against the LMP1 car.

“Okay, it had better power, especially if you hit the push-to-pass, but from the car itself I wasn’t so impressed in terms of cornering speed, approaching the corner, rolling speed through.”

Luhr estimates that he managed 30 laps of testing prior to the event, where he felt lost on set-up.

“I remember I was sitting in the press conference and next to me were [Helio] Castroneves and [Scott] Dixon,” Luhr relates. “One journalist asked me, ‘How is it going?’ and I said, ‘Man, I’m completely lost. I don’t know, one session the car is great, next session I have no grip’. And they both looked at me and said, ‘Hey buddy, you’re doing just fine, that’s Sears Point in an IndyCar!’ So I went, ‘Ah, okay!’” 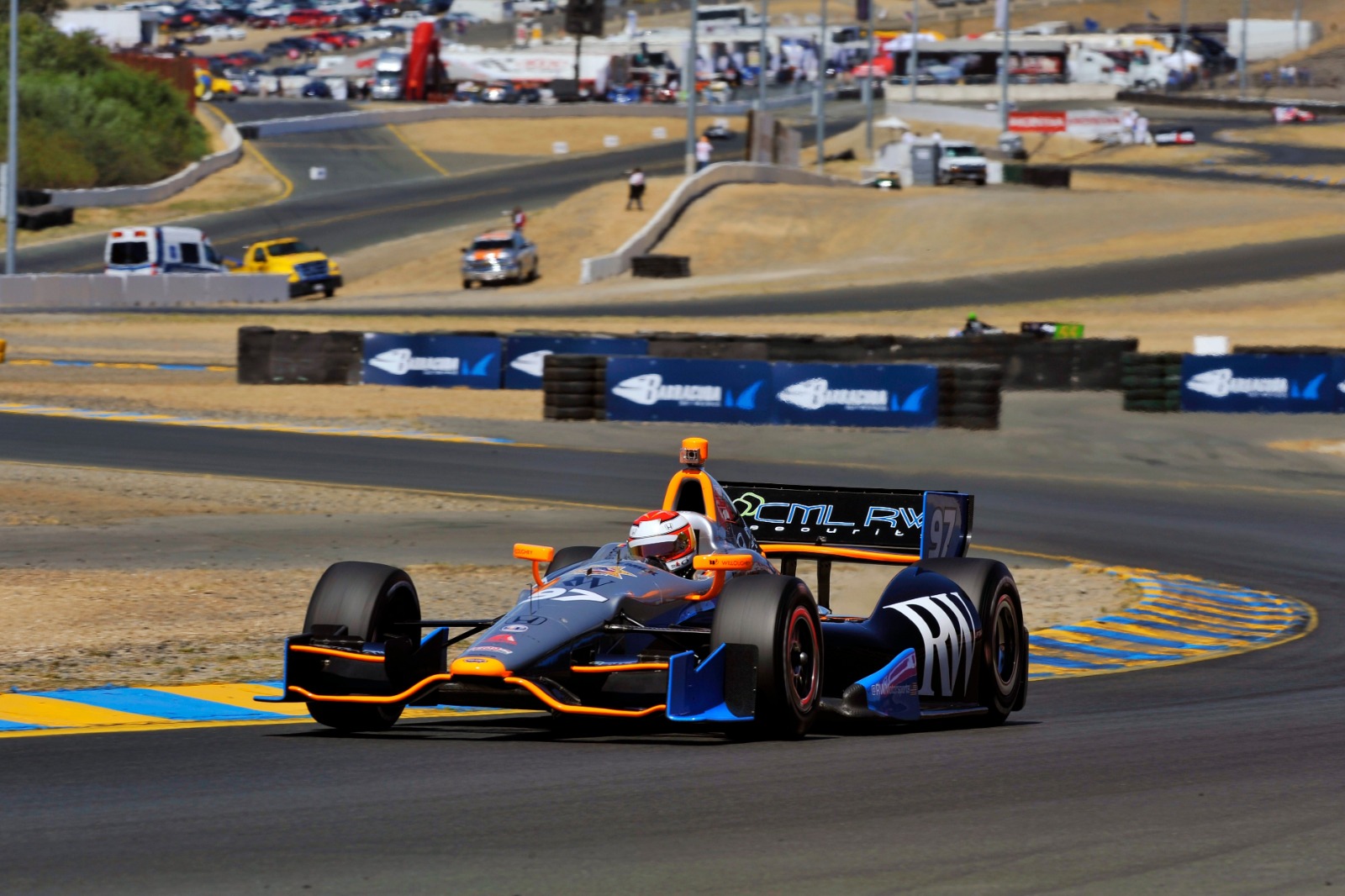 Luhr found the physicality of the IndyCar a shock, and recalls it was weaker in several areas relative to the LMP1 car

Perhaps unsurprisingly, he brought up the rear of the 25-car grid in qualifying, but had kept himself out of trouble in a race overshadowed by a controversial penalty for Dixon after making contact with a member of Will Power’s pitcrew while the race-leading pair made their final stops. Having just been repassed by the recovering Dixon, he avoided contact ahead at the hairpin as Ryan Briscoe spun Charlie Kimball, who then was hit by Takuma Sato and Ed Carpenter, but was unable to fight for positions at the final restart when his engine let go.

“When the engineer said, ‘Green, green, green’, I put the foot down and, ‘Boof!’ That was it,” he says. “Otherwise I could have done the race the following week at Baltimore, but because Dixon was up for the championship, they had to keep the reserve engine for him. Which I was fine with, because there was an ALMS race on the same weekend and I thought maybe it’s a little bit too much. I still would have done it though. But anyhow, I enjoyed myself.”

Afterwards, Luhr bumped into his former ALMS team boss Roger Penske in the paddock, and his words gave the German’s confidence a boost.

“He said, ‘Hey, you did very good, boy’,” recalls Luhr. “It’s the toughest race of the year, all the guys were like super into it because it was almost the last race of the season, and I did probably 30 laps prior to that. For me, that was the biggest compliment you can get from the Captain!”

Satisfied that he could “perform there to a level where I’m not making a complete fool of myself”, Luhr opened talks with the team over doing the full season in 2014, but was clear from the start that ovals were off the menu. Dan Wheldon had been killed in a horrifying multi-car pileup at Las Vegas in 2011, unable to avoid a wall of cars in front of him. The dangers of oval racing were reaffirmed the following year at Pocono when Justin Wilson – who finished second at Sonoma on that day – was struck by the nosecone of Sage Karam’s crashed car and died of his injuries.

“If I would have been 10 years younger, I would have said yeah I’m going for it,” says Luhr. “But at that time I didn’t feel really comfortable with it. Obviously there were some terrible accidents and they did nothing wrong, it was something else’s fault and they paid with their lives for it. I wasn’t willing to take that kind of risk.

“I said, ‘I’m going to do Indy because that’s another type of racing, it’s more like an endurance race’. But to do Fontana or Texas, Las Vegas or something stupid… I was just not willing to take the risk.” 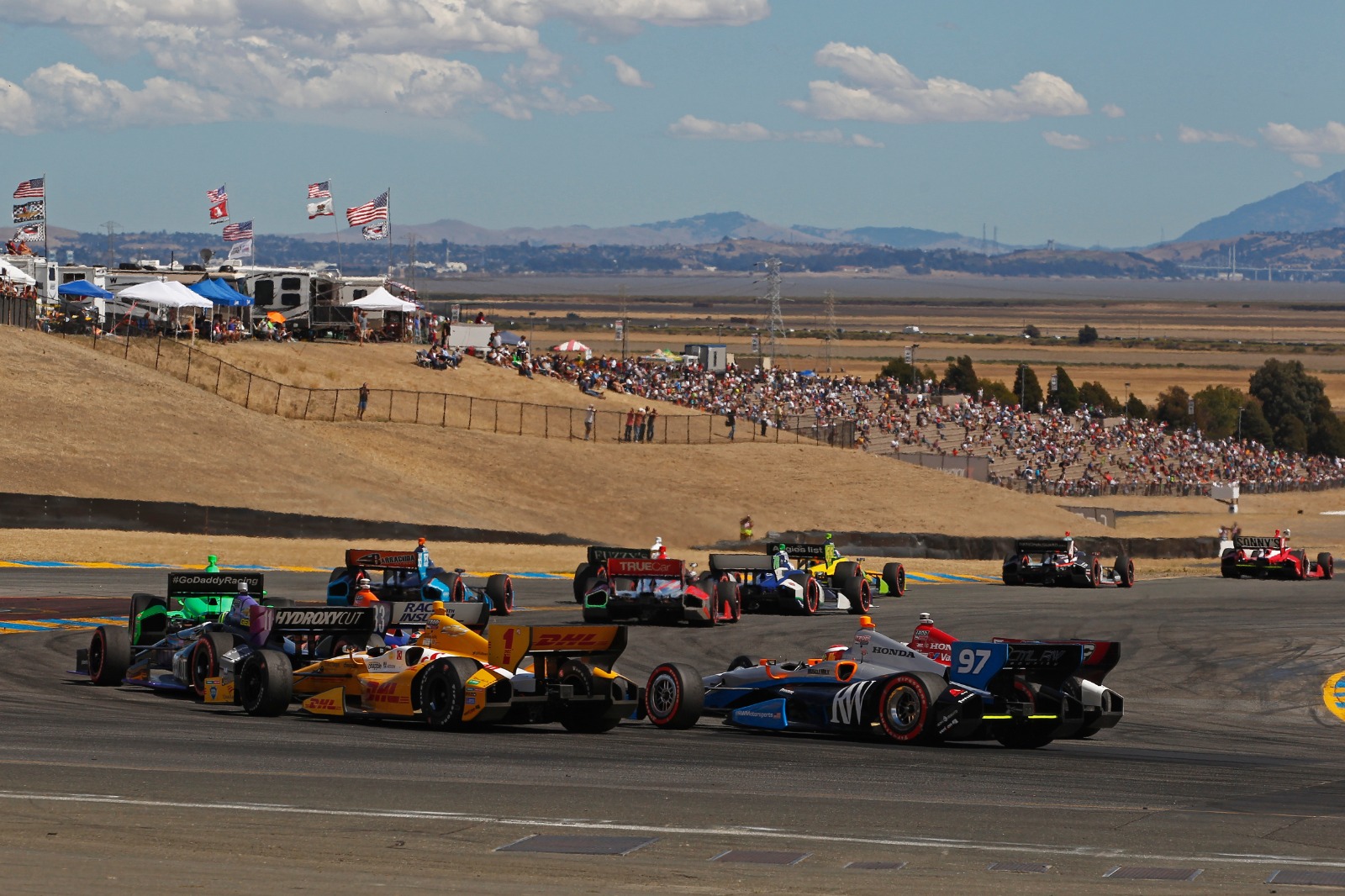 Given the chance to have done a full programme of road and street courses, Luhr believes he could have been successful in IndyCar.

“Absolutely, I don’t see a reason why not,” he says.

Instead, he joined BMW and added victory in the Spa 24 Hours to his CV in 2015, finishing second at the Nurburgring 24 Hours the same year. After his long spell as a factory driver concluded at the end of 2016, he has been a regular in ADAC GT Masters and in the Nurburgring-based VLN Series, before starting his own customer racing team LiLaC Rennsport in 2020 together with experienced engineer Ricki Martino, based in Switzerland. 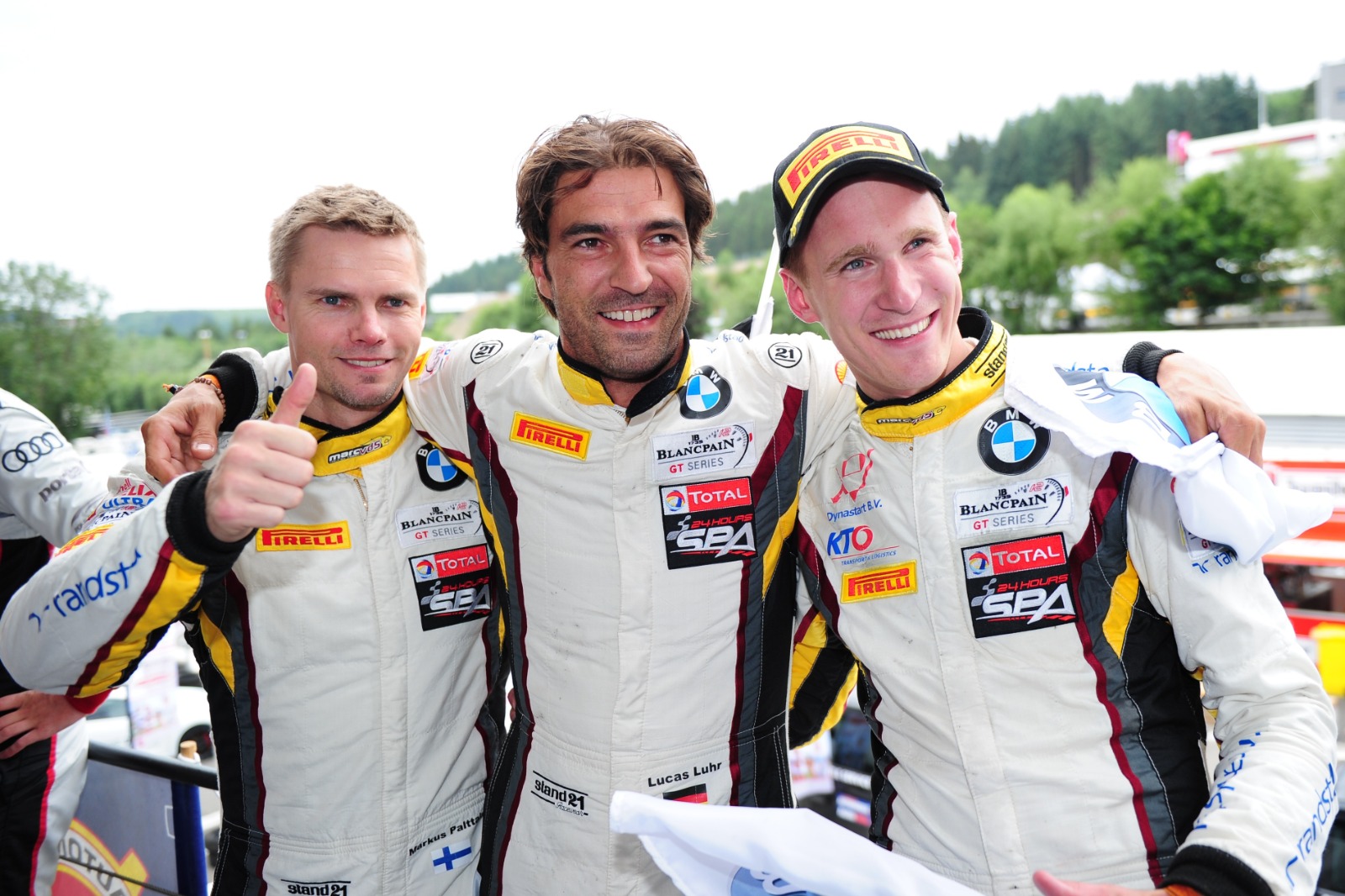