The #24 M8 GTE of Jesse Krohn, John Edwards, Augusto Farfus and guesting Australian Supercar regular Chaz Mostert took victory by 14 seconds after a race-long battle with the two factory Porsches, with Krohn making the decisive pass on Nick Tandy in the final hour.

This year, the victorious crew led for a race-high total of 428 laps and Rahal - whose cars have languished at the bottom of the IMSA GTLM manufacturers standings for the past two seasons - hailed the victory as evidence that 2019 was no fluke.

"Whoever thought we were just lucky to win last year were shown otherwise today, that was a battle for 24 hours," he said.

"The drivers did a fantastic job, and the same goes for the crew. We did not make any mistakes.

"I am delighted for my team and BMW Motorsport. Congratulations to Porsche and Corvette, who were good from the word go with their new cars. We are simply very happy today."

Farfus added that it was "the best 24-hour race I have driven in my whole life" and paid tribute to his team's "exceptional" performance. 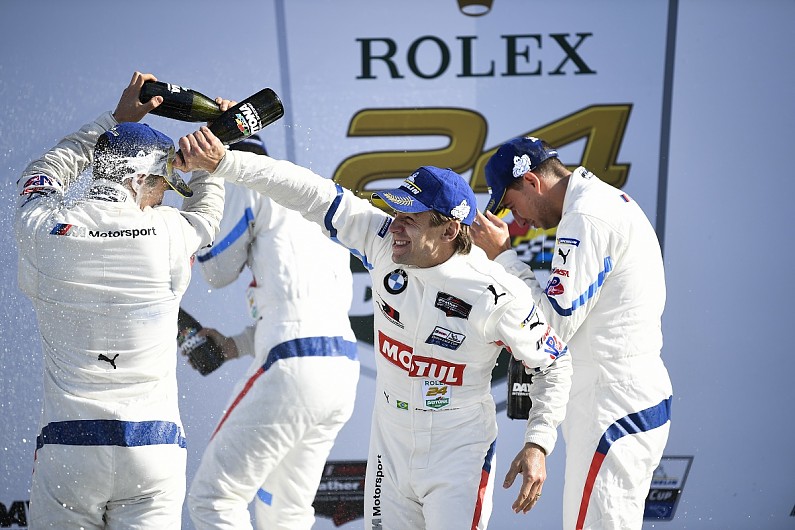 "It was extremely fast, extremely close, and you could not afford to make any mistakes," he said.

"We drove a perfect race, the car worked well throughout the entire race. You don't get through the full 24 hours like that very often. To win this race twice in a row is exceptional."

The #3 crew led twice for a total of seven laps, but finished as the first car off the lead lap in fourth with Garcia admitting "we didn't have enough pace to be on the podium or to win".

"I'm proud that at least one car finished near the lead lap," he said.

"For sure every time out we want to win and do the very best possible. Today, this was the best possible result.

"I'm very happy the Corvette C8.R went across the finish line for the first time.

"It wasn't a win, but I'm sure that knowing how it reacts and how much room there is for development, this Corvette will be a winning machine before long."

The #4 car shared by Oliver Gavin, Tommy Milner and Marcel Fassler but fell out of contention with an oil leak. It rejoined after eight hours in the pits to complete more mileage.